Starlight: Toward an Interstellar Biology

If you could send out a fleet of small lightsails, accelerated to perhaps 20 percent of the speed of light, you could put something of human manufacture into the Alpha Centauri triple star system within about 20 years. So goes, of course, the thinking of Breakthrough Starshot, which continues to investigate whether such a proposal is practicable. As the feasibility study continues, we’ll learn whether the scientists involved have been able to resolve some of the key issues, including especially data return and the need for power onboard to make it happen.

The concept of beam-driven sails for acceleration to interstellar speeds goes back to Robert Forward (see Jim Benford’s excellent A Photon Beam Propulsion Timeline in these pages) and has been examined for several decades by, among others, Geoffrey Landis, Gregory Matloff, Benford himself (working with brother Greg) in laboratory experiments at JPL, Leik Myrabo, and Chaouki Abdallah and team at the University of New Mexico. At the University of California, Santa Barbara, Philip Lubin has advocated DE-STAR (Directed Energy Solar Targeting of Asteroids and Exploration), a program for developing a system of modular phased laser arrays that could be used for asteroid mitigation and as propulsion for deep space missions.

Out of this grew Directed Energy Propulsion for Interstellar Exploration (DEEP-IN), which homes in on using tiny wafer probes for interstellar travel. Also known as Starlight, the program is now the subject of a paper in Acta Astronautica that takes interstellar mission concepts into the realm of biology. Working with Stephen Lantin and a team of researchers at the UCSB Experimental Cosmology Group, Lubin is examining how we can use small relativistic spacecraft to place seeds and microorganisms for experimentation outside the Solar System. 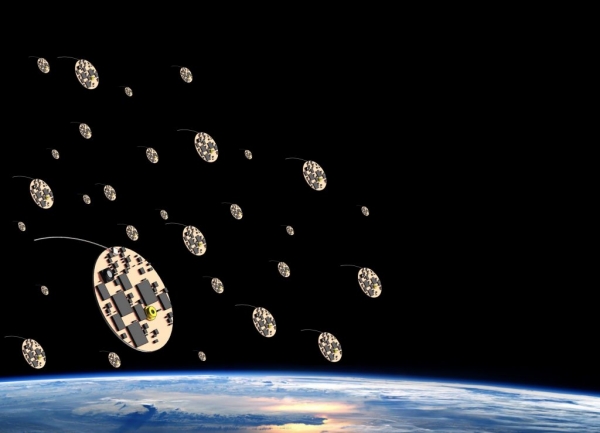 Image: Initial interstellar missions will require a complete reevaluation and redesign of the space systems of today. The objective of the Wafer Scale Spacecraft Development program (WSSD) at the University of California Santa Barbara (UCSB) is to design, develop, assemble and characterize the initial prototypes of these robotic platforms in an attempt to pave a path forward for future innovation and exploration. This program, which is just one venture of the UCSB Experimental Cosmology Group’s Electronic and Advanced Systems Laboratory (UCSB Deepspace EAS), focuses on leveraging continued advances in semiconductor and photonics technologies to recognize and efficiently address the many complexities associated with long duration autonomous interstellar mission. Credit: UCSB Experimental Cosmology Group.

Biology Beyond the Heliosphere

The goal of Starlight is not to seed the nearby universe — that’s an entirely different discussion! — but to conduct what the paper calls ‘biosentinel’ experiments, sending them not to another star but to empty interstellar space to help us characterize how simple biological systems deal with conditions there. This could be seen as a step toward eventual human travel to other stars, but the paper doesn’t dwell on that prospect, wisely I think, because what we learn from such experiments is vital information in its own right and may teach us a good deal about abiogenesis and the possibility of panspermia as a way of scattering life throughout the cosmos.

We may, in other words, be able to characterize biological systems to the point where we understand how to protect human life on a future interstellar mission, but the goal of Starlight is to begin the experimentation that will tell us what is possible for living systems under a wide variety of conditions in deep space. Such missions are, in effect, scouts. Putting them onto interstellar trajectories could open up pathways to larger, more biologically complex missions depending on what they find.

I think the emphasis on biology here is heartening, for space research even in the near-term has been top-heavy in terms of propulsion engineering, obviously critical but sometimes neglectful of such critical matters as how to create closed loop life support. Even a destination as nearby as Mars forces us to ask whether humans can adapt long-term to sharply different gravity gradients, among a multitude of other questions. Thus the need for an orbital station dedicated to biology and physiology that would inform mission planning and spacecraft design.

But that kind of complex starts with humans and examines their response in nearby space. What Lubin and team are talking about is studying basic biological systems and their response to conditions outside the heliosphere, where we can begin experiments within the realm of interstellar biology. Any lifeforms we send to interstellar space will be exposed to conditions of zero-g but also hypergravity, as during the launch and propulsion phases of the flight. We would likewise be working with experiments that can be adjusted in terms of exposure to vacuum, radiation and a wide range of temperatures affecting a variety of sample microorganisms.

A Fleet of Interstellar Laboratories

How to experiment, and what to experiment on? Remember that we’re dealing with payloads of wafer size given our constraints on mass. The UCSB work has focused on the design of a microfluidics chamber that can provide suitable conditions for reviving and sustaining microorganisms on the order of 200 μm in length. The paper refers to performing ‘remote lab-on-a-chip experiments,’ using new materials, discussed within, that are enhanced for biocompatibility. I don’t want to go too deeply into the weeds on this, but here’s the gist:

[New thermoplastic elastomers] can be manufactured with diverse glass transition temperatures and either monolithically prepared with an imprinter or integrated with other candidates, such as glass. Polymerase chain reaction (PCR) on a chip is another area that will evolve naturally over the next decade and is one of many biological techniques that could be incorporated in designs. It is also possible that enzymes could be stabilized in osmolytes to perform onboard biochemical reactions. For the study of life in the interstellar environment, it is necessary to include experimental controls (in LEO and on the ground) and the use of diverse genotypes and species to characterize a wide response space…

The biological species best suited for this kind of investigation will have to have key characteristics, the first of which is a low metabolic rate in a chamber where, due to mass restrictions, nutrients will be limited. Also critical is cryptobiotic capability, meaning the ability to go into hibernation with the lowest possible metabolic rate. A tolerance for radiation is obviously helpful, making certain species clear candidates for these missions, especially tardigrades (so-called ‘water bears’), which are known for being ferociously robust under a wide range of conditions and are capable of reducing biological activity to undetectable levels.

We know that tardigrades can survive high radiation as well as high pressure environments; they have been demonstrated to be capable of enduring exposure to space in low Earth orbit. A second outstanding candidate is C. elegans, a multicellular animal small enough that a teaspoon can hold approximately 100 million juvenile worms. Also helpful is the fact that C. elegans has a rapid life cycle of about 14 days, and can, like tardigrades,be placed into suspended animation for later recovery. Other prospects among organisms and cell types are examined in these pages, and the authors call for near-term experiments on mammalian cells to delve into their response to space conditions.

Clearly, a high radiation environment, as found between the stars, offers the chance to study how life began by varying the degree of radiation shielding to which prebiotic chemicals are exposed:

The high radiation environment of interstellar space provides an interesting opportunity to study the biochemical origins of life in spacecraft with low radiation shielding versus those equipped with protective measures to limit the effect of galactic cosmic radiation (GCR) on the prebiotic chemicals, possibly shedding light on the flexibility in the conditions needed for life to arise.

Thus a spacecraft of this sort can also become an experiment in abiogenesis, the formation of nucleic acids and other biological molecules having heretofore been recreated only under laboratory conditions on Earth or in low-Earth orbit. Designing the equipment to make such experiments possible is part of the ongoing developmental work for Starlight.

An interstellar experimental biology probes the factors that make some organisms better adapted for space conditions, but it does hold implications for human expansion:

Selecting for species that are physiologically better fit for interstellar travel opens up new avenues for space research. In testing the metabolism, development, and replication of species, like C. elegans, we can see how biological systems are generally affected by space conditions. C. elegans and tardigrades are inherently more suited to space flight as opposed to humans due to factors like the extensive DNA protection mechanisms some tardigrades have for radiation exposure or the dauer larva state of arrested development C. elegans enter when faced with unfavorable growth conditions. However, as there is overlap between our species, like the human orthologs for 80% of C. elegans proteins, we can begin to make some predictions on the potential for human life in interstellar space.

Any time we ponder sending life forms into space, including simple bacteria that may have contaminated lander probes on other planets, we run into serious issues of planetary protection. I want to look at the paper’s discussion of those in the next post, along with a consideration of space-based biology in the context of concepts that could offer backup systems for Earth.