Going After Sagittarius A*

Only time will tell whether humanity has a future beyond the Solar System, but if we do have prospects among the stars — and I fervently hope that we do — it’s interesting to speculate on what future historians will consider the beginning of the interstellar era. Teasing out origins is tricky. You could label the first crossing of the heliopause by a functioning probe (Voyager 1) as a beginning, but neither the Voyagers nor the Pioneers (nor, for that matter, New Horizons) were built as interstellar missions.

I’m going to play the ‘future history’ game by offering my own candidate. I think the image of the black hole in the galaxy M87 marks the beginning of an era, one in which our culture begins to look more and more at the universe beyond the Solar System. I say that not because of what we found at M87, remarkable as it was, but because of the instrument used. The creation of a telescope that, through interferometry, can create an aperture the size of our planet speaks volumes about what a small species can accomplish. An entire planet is looking into the cosmos.

So will some future historian look back on the M87 detection as the beginning of the ‘interstellar era’? No one can know, but from the standpoint of symbolism — and that’s what this defining of eras is all about — the creation of a telescope like this is a civilizational accomplishment. I think its cultural significance will only grow with time. 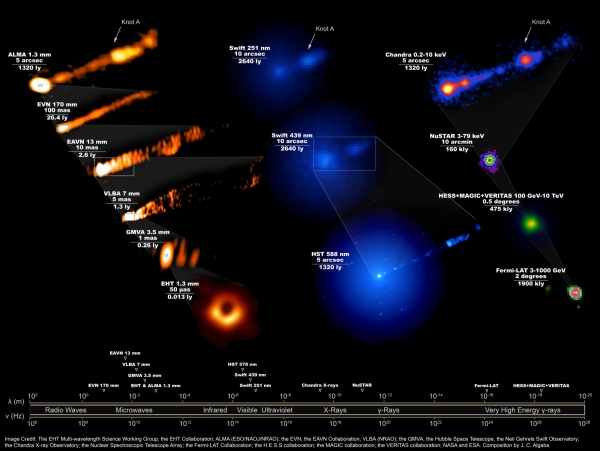 Image: Composite image showing how the M87 system looked, across the entire electromagnetic spectrum, during the Event Horizon Telescope’s April 2017 campaign to take the iconic first image of a black hole. Requiring 19 different facilities on the Earth and in space, this image reveals the enormous scales spanned by the black hole and its forward-pointing jet, launched just outside the event horizon and spanning the entire galaxy. Credit: the EHT Multi-Wavelength Science Working Group; the EHT Collaboration; ALMA (ESO/NAOJ/NRAO); the EVN; the EAVN Collaboration; VLBA (NRAO); the GMVA; the Hubble Space Telescope, the Neil Gehrels Swift Observatory; the Chandra X-ray Observatory; the Nuclear Spectroscopic Telescope Array; the Fermi-LAT Collaboration; the H.E.S.S. collaboration; the MAGIC collaboration; the VERITAS collaboration; NASA and ESA. Composition by J.C. Algaba.

Into the Milky Way’s Heart

The Event Horizon Telescope (EHT) is not a single physical installation but a collection of telescopes around the world that use Very Long Baseline Interferometry to produce a virtual observatory with, as mentioned above, an aperture the size of our planet. Heino Falcke’s book Light in the Darkness (HarperOne, 2021) tells this story from the inside, and it’s as exhilarating an account of scientific research as any I’ve read.

M87 seemed in some ways an ideal target, with a black hole thought to mass well over 6 billion times more than the Sun. In terms of sheer size, M87 dwarfed estimates of the Milky Way’s supermassive black hole (Sgr A*), which weighs in at 4.3 million solar masses, but it’s also 2,000 times farther away. Even so, it was the better target, for M87 was well off the galactic plane, whereas astronomers hoping to study the Milky Way’s black hole have to contend with shrouds of gas and dust and the fact that, while average quasars consume one sun per year, Sgr A* pulls in 106 times less.

But the investigation of Sgr A* continues as new technologies come into play, with the James Webb Space Telescope now awaiting launch in December and already on the scene in French Guiana. Early in JWST’s observing regime, Sgr A* is to be probed at infrared wavelengths, adding the new space-based observatory to the existing Event Horizon Telescope. Farhad Yusef-Zadeh, principal investigator on the Webb Sgr A* program, points out that JWST will allow data capture at two different wavelengths simultaneously and continuously, further enhancing the EHT’s powers.

Among other reasons, a compelling driver for looking hard at Sgr A* is the fact that it produces flares in the dust and gas surrounding it. Yusef-Zadeh (Northwestern University) notes that the Milky Way’s supermassive black hole is the only one yet observed with this kind of flare activity, which makes it more difficult to image the black hole but also adds considerably to the scientific interest of the investigation. The flares are thought to be the result of particles accelerating around the object, but details of the mechanism of light emission here are not well understood. 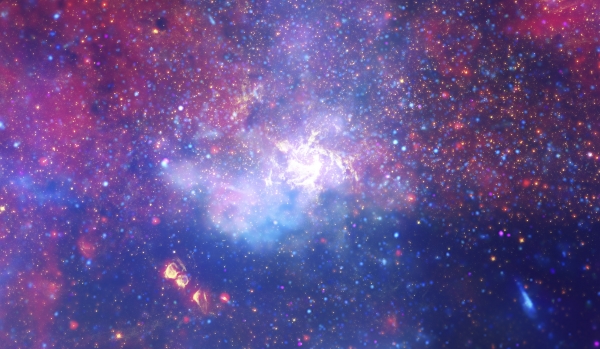 Image: An enormous swirling vortex of hot gas glows with infrared light, marking the approximate location of the supermassive black hole at the heart of our Milky Way galaxy. This multiwavelength composite image includes near-infrared light captured by NASA’s Hubble Space Telescope, and was the sharpest infrared image ever made of the galactic center region when it was released in 2009. While the black hole itself does not emit light and so cannot be detected by a telescope, the EHT team is working to capture it by getting a clear image of the hot glowing gas and dust directly surrounding it. Credit: NASA, ESA, SSC, CXC, STS.

Thus we combine radio data from the Event Horizon Telescope with JWST’s infrared data. How different wavelengths can tease out more information is evident in the image above. Here we have a composite showing Hubble near-infrared observations in yellow, and deeper infrared observations from the Spitzer Space Telescope in red, while light detected by the Chandra X-Ray Observatory appears in blue and violet. Flare detection and better imagery of the region as enabled by adding JWST to the EHT mix, which will include X-ray and other observatories, should make for the most detailed look at Sgr A* that has ever been attempted.

What light we detect associated with a black hole is from the accreting material surrounding it, with the event horizon being its inner edge — this is what we saw in the famous M87 image. The early JWST observations, expected in its first year of operation, are to be supplemented by further work to build up our knowledge of the flare activity and enhance our understanding of how Sgr A* differs from other supermassive black holes. 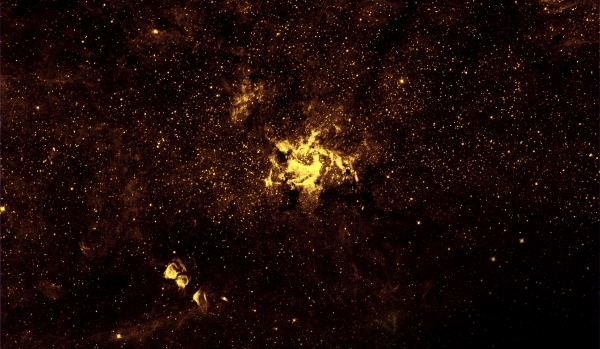 Image: Heated gas swirls around the region of the Milky Way galaxy’s supermassive black hole, illuminated in near-infrared light captured by NASA’s Hubble Space Telescope. Released in 2009 to celebrate the International Year of Astronomy, this was the sharpest infrared image ever made of the galactic center region. NASA’s upcoming James Webb Space Telescope, scheduled to launch in December 2021, will continue this research, pairing Hubble-strength resolution with even more infrared-detecting capability. Of particular interest for astronomers will be Webb’s observations of flares in the area, which have not been observed around any other supermassive black hole and the cause of which is unknown. The flares have complicated the Event Horizon Telescope (EHT) collaboration’s quest to capture an image of the area immediately surrounding the black hole, and Webb’s infrared data is expected to help greatly in producing a clean image. Credit: NASA, ESA, STScI, Q. Daniel Wang (UMass).

Whether we’re entering an interstellar era or not, we’re going to be learning a lot more about the heart of the Milky Way, assuming we can get JWST aloft. How many hopes and plans ride on that Ariane 5!