Looking into Astro2020’s recommendations for ground-based astronomy, I was heartened with the emphasis on ELTs (Extremely Large Telescopes), as found within the US-ELT project to develop the Thirty Meter Telescope and the Giant Magellan Telescope, both now under construction. Such instruments represent our best chance for studying exoplanets from the ground, even rocky worlds that could hold life. An Astro2020 with different priorities could have spelled the end of both these ELT efforts in the US even as the European Extremely Large Telescope, with its 40-meter mirror, moves ahead, with first light at Cerro Armazones (Chile) projected for 2027.

So the ELTs persist in both US and European plans for the future, a context within which to consider how planet detection continues to evolve. So much of what we know about exoplanets has come from radial velocity methods. These in turn rely critically on spectrographs like HARPS (High Accuracy Radial Velocity Planet Searcher), which is installed at the European Southern Observatory’s 3.6m telescope at La Silla in Chile, and its successor ESPRESSO (Echelle Spectrograph for Rocky Exoplanet and Stable Spectroscopic Observations). We can add the NEID spectrometer on the WIYN 3.5m telescope at Kitt Peak to the mix, now operational and in the hunt for ever tinier Doppler shifts in the light of host stars.

We’re measuring the tug a planet puts on its star by looking radially — how is the star pulled toward us, then away, as the planet moves along its orbit? Given that the Earth produces a movement of a mere 9 centimeters per second on the Sun, it’s heartening to see that astronomers are closing on that range right now. NEID has demonstrated a precision of better than 25 centimeters per second in the tests that led up to its commissioning, giving us another tool for exoplanet detection and confirmation.

But this is a story that also reminds us of the vast amount of data being generated in such observations, and the methods needed to get this information distributed and analyzed. On an average night, NEID will collect about 150 gigabytes of data that is sent to Caltech, and from there via a data management network called Globus to the Texas Advanced Computing Center (TACC) for analysis and processing. TACC, in turn, extracts metadata and returns the data to Caltech for further analysis. The results are made available by the NASA Exoplanet Science Institute via its NEID Archive. 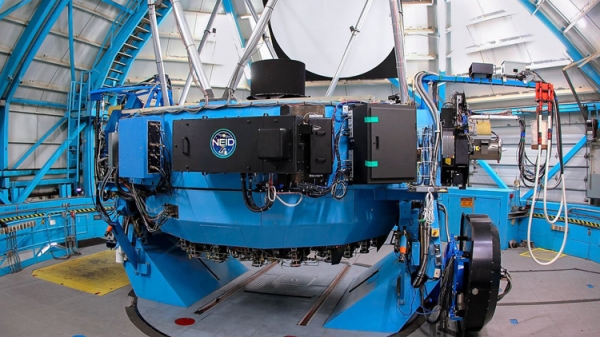 What a contrast with the now ancient image of the astronomer on a mountaintop coming away with photographic plates that would be analyzed with instruments like the blink comparator Clyde Tombaugh used to discover Pluto in 1930. The data now come in avalanche form, with breakthrough work occurring not only on mountaintops but in the building of data pipelines like these that can be generalized for analysis on supercomputers. The vast caches of data contain the seeds of future discovery.

“NEID is the first of hopefully many collaborations with the NASA Jet Propulsion Laboratory (JPL) and other institutions where automated data analysis pipelines run with no human-in-the-loop. Tapis Pipelines, a new project that has grown out of this collaboration, generalizes the concepts developed for NEID so that other projects can automate distributed data analysis on TACC’s supercomputers in a secure and reliable way with minimal human supervision.”

NEID also makes a unique contribution to exoplanet detection by being given over to the analysis of activity on our own star. Radial velocity is vulnerable to confusion over starspots — created by convection on the surface of exoplanet host stars and mistaken for planetary signatures. The plan is to use NEID during daylight hours with a smaller solar telescope developed for the purpose to track this activity. Eric Ford (Penn State) is an astrophysicist at the university where NEID was designed and built:

“Thanks to the NEID solar telescope, funded by the Heising-Simons Foundation, NEID won’t sit idle during the day. Instead, it will carry out a second mission, collecting a unique dataset that will enhance the ability of machine learning algorithms to recognize the signals of low-mass planets during the nighttime.” 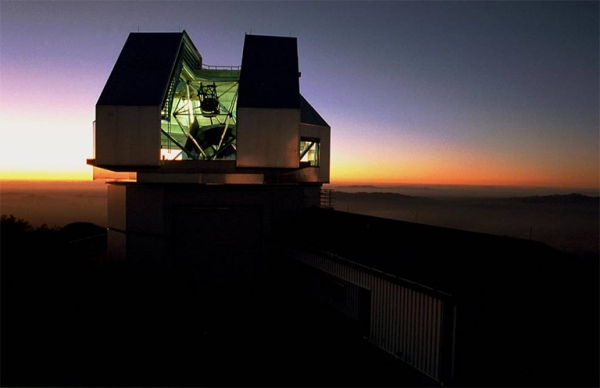 Modern astronomy in a nutshell. We’re talking about data pipelines operational without human intervention, and machine-learning algorithms that are being tuned to pull exoplanet signals out of the noise of starlight. In such ways does a just commissioned spectrograph contribute to exoplanetary science through an ever-flowing data network now indispensable to such work. Supercomputing expertise is part of the package that will one day extract potential biosignatures from newly discovered rocky worlds. Bring on the ELTs.