Probing the Likelihood of Panspermia

I’m looking at a paper just accepted at The Astrophysical Journal on the subject of panspermia, the notion that life may be distributed through the galaxy by everything from interstellar dust to comets and debris from planetary impacts. We have no hard data on this — no one knows whether panspermia actually occurs from one planet to another, much less from one stellar system to another star. But we can investigate possibilities based on what we know of everything from the hardiness of organisms to the probabilities of ejecta moving on an interstellar trajectory.

In “Panspermia in a Milky Way-like Galaxy,” lead author Raphael Gobat (Pontificia Universidad Católica de Valparaíso, Chile) and colleagues draw together current approaches to the question and develop a modeling technique based on our assumptions about galactic habitability and simulations of galaxy structure.

Panspermia is an ancient concept. Indeed, the word first emerges in the work of Anaxagoras (born ca. 500–480 BC) and makes its way through Lucian of Samosata (born around 125 AD), through Kepler’s Somnium, to re-emerge in 19th Century microbiology. Accidental propagation of life’s building blocks was considered by Swedish chemist Svante Arrhenius in the early 20th Century. Fred Hoyle and Nalin Chandra Wickramasinghe developed the idea still further in the 1970s and 80s.

So how do we approach a subject that has remained controversial, likely because it does not appear necessary in explaining how life emerged on our own Earth? As the paper notes, modern work falls into three distinct categories, the first involving whether or not microorganisms can survive ejection from a planetary surface and re-entry onto another. Remarkably, hypervelocity impacts are not show-stoppers for the idea, suggesting that a small fraction of spores could survive impact and transit.

As to timescale and kinds of transfer mechanisms, most work seems to have focused on mass transfer between planets in the same stellar system, usually through lithopanspermia, which is the exchange of meteoroids. It’s true, however, that transit between different stars has been investigated, looking at radiation pressure on small grains of material. There are even a few studies on whether or not a stellar system might be intentionally seeded by means of technology. The term here is directed panspermia, a subject more often treated in science fiction than academic circles.

Although not entirely. While directed panspermia is off the table for Gobat and colleagues, we’ll take a look in a month or so at what does appear in the literature. Some interesting ideas have emerged, but they’re not for today.

What Gobat and co-authors have in mind is to apply a model of galactic habitability they have developed (citation below) in conjunction with the simulations of spiral galaxies based on hydrodynamics that are found in the McMaster Unbiased Galaxy Simulations (MUGS), a set of 16 simulated galaxies developed within the last decade. On the latter, the paper notes:

These simulations made use of the cosmological zoom method, which seeks to focus computational effort into a region of interest, while maintaining enough of the surrounding large-scale structure to produce a realistic assembly history. To accomplish this, the simulation was first carried out at low resolution using N-body physics only. Dark matter halos were then identified, and a sample of interesting objects selected. The particles making up, and surrounding, these halos were then traced back to their origin, and the simulation carried out again with the region of interest simulated at higher resolution.

Simulation and re-simulation allow the MUGS galaxies to reproduce the known metallicity gradients in observed galaxies and likewise reproduce their large-scale structure, including disks, halos and bulges. The authors use one of the simulated galaxies, a spiral galaxy similar to but not identical with the Milky Way, to investigate the probability and efficiency of panspermia as dependent on the galactic environment. 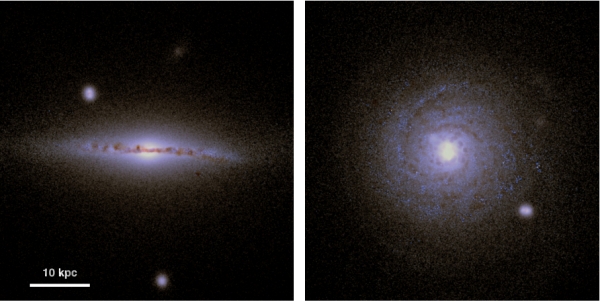 Image: This is Figure 1 from the paper. Caption: Mock UV J color images of the simulated galaxy g15784 (Stinson et al. 2010; Nickerson et al. 2013), for both edge-on (left) and face-on (right) orientations, using star and gas particles, and assuming Bruzual & Charlot (2003) stellar population models and a simple dust attenuation model (Li & Draine 2001) with a gas-to-dust ratio of 0.01 at solar metallicity. Additionally, we include line emission from star particles with ages ≤ 50 Myr, following case B recombination (Osterbrock & Ferland 2006) and metallicity-dependent line ratios (Anders & Fritze-v. Alvensleben 2003). All panels are 50 kpc across and have a resolution of 100 pc. Two spheroidal satellites can be seen above and below the galactic plane, respectively. Credit: Gobat et al.

Panspermia appears to be more likely in the central regions of the galactic bulge, as we might assume due to the high density of stars there, a factor which counterbalances their lower habitability in this model. Panspermia is found to be much less likely as we move out into the central disk. In the model of habitability as developed by Gopat and Sungwook Hong in 2016, habitability increases as we depart from galactic center, while the new paper shows that the likelihood of panspermia works inversely, being more likely toward the bulge.

In a sense, we decouple habitability from panspermia. The paper uses the term ‘particles’ to refer not to individual stars, but to ensembles of stars with a range of masses but the same metallicity. This reflects, say the authors, the resolution limits of the simulations, which cannot track individual stars through time. From the paper, noting the narrow dynamic range of habitability vs. panspermia [the italics are mine]:

The models used here have a number of limitations, but it’s interesting that they point to panspermia as being considerably less efficient at seeding planets than the evolution of life on the planets themselves. At best, the authors find the probability of panspermia to be no more than 3% of all the star particles in their simulation. This may be an overly generous figure, and the paper acknowledges that it cannot be more precisely quantified other than to say that when it comes to efficiency, local evolution wins going away. Higher resolution galaxy simulations will offer more realistic insights.

We have a result, as the authors acknowledge, that is more qualitative than quantitative, a measure of how much we have to learn about galaxies themselves, and about the Milky Way in particular. The sample galaxy, for example, has a higher bulge-to-disk ratio than the Milky Way. But more significantly, the capture fraction of spores by target planets and the likelihood that life actually does develop on planets considered habitable are subjects with no concrete data to firm up the conclusions.

We can anticipate that future simulations will take into account a rotating evolving galaxy as opposed to the single simulation ‘snapshot’ the paper offers. Nonetheless, this modeling of organic compounds being transferred between stars points to the orders of magnitude difference in the likelihood of panspermia between the inner and the outer disk, a useful finding. Given that so few of the star particles the simulation generates have high panspermia probability, the process may occur but under conditions that make it much less effective than prebiotic evolution.

The paper is Gobat et al., “Panspermia in a Milky Way-like Galaxy,” accepted at the Astrophysical Journal (preprint). The paper on galactic habitability is Gobat & Hong, “Evolution of galaxy habitability,” Astronomy & Astrophysics Vol. 592, A96 (04 August 2016). Abstract.