If self-reproducing probes have ever been turned loose in the Milky Way, they may well have spread throughout the galaxy. Our planet is 4.6 billion years old, but the galaxy’s age is 13 billion, offering plenty of time for this spread. A number of papers have explored the concept, including work by Frank Tipler, who in 1980 argued that even at the speed of current spacecraft, the galaxy could be completely explored within 300 million years. Because we had found no evidence of such probes, Tipler concluded that extraterrestrial technological civilizations did not exist.

Robert Freitas also explored the consequences of self-reproducing probes in that same year, reaching similar conclusions about how quickly they would spread, although not buying Tipler’s ultimate conclusion. It’s interesting that Freitas went to work on looking for evidence, reasoning that halo orbits around the Lagrangian points might be one place to search. He was, to my knowledge, the first to use the term SETA — Search for Extraterrestrial Artifacts — which has now come into common use, and is currently under examination by Jim Benford in his work on ‘lurkers.’

A new paper from Michaël Gillon (University of Liège) and Artem Burdanov (Massachusetts Institute of Technology) has now appeared that follows the implications of self-reproduction and technology, tying them to a more specific search regimen. Conversant with the work of Von Eshleman as well as Claudio Maccone, the authors ask whether using the gravitational lens offered by a star wouldn’t make the most reasonable method for ETI communications. The Sun’s huge magnifications, bending light from objects behind it as seen from a relay somewhere beyond its 550 AU lensing distance, could enable participation in a network that functioned on a galactic scale.

You probably remember Gillon as the man who led the team that discovered TRAPPIST-1’s planets. Back in 2014, he began his exploration of gravitational lensing and communications with the publication of a paper titled “A novel SETI strategy targeting the solar focal regions of the most nearby stars.” Accepting the idea that self-reproducing probes could spread through the galaxy in a span of hundreds of millions of years, the author opened the question of detectability. He drew on Maccone’s insight that links enabled by gravitational lensing could allow data-rich communications between two stars at extremely low power. It is in this 2014 paper that Gillon first proposes looking for leakage in traffic between star systems.

A civilization that has spread throughout the galaxy might set up such relays around any stars useful as network nodes. This would turn conventional SETI on its head. Rather than scanning for radio or optical signals from other stellar systems, we consider intercepting ongoing traffic between another star and the relay in our own system. A fully colonized galaxy, so the thinking goes, should have a relay around at least one nearby star.

Thus the term Focal Interstellar Communication Devices (FICDs), examples of which could be present in our own Solar System and perhaps in the focal regions of nearby stars. Several studies have already appeared on a strategy of performing intense multi-spectral monitoring of these focal regions in the hopes of snagging communication leakage from such a network. Gillon and Burdanov focus on a specific FICD. They identify Wolf 359, an M-dwarf that is the third closest stellar system to our own, as a prime candidate to receive a signal from a local FICD, and implement an optical search.

…detecting the FICD emission to a nearby star can only be done if the observer is within one of these narrow beams, putting a stringent geometrical constraint on the project concept. For an Earth-based observer, this means that the Earth’s minimum impact parameter has to be close to 1 as seen from the FICD, and thus also from the targeted nearby star. In other words, the Earth has to be a transiting (or nearly transiting) planet for one of the nearest stars to give this SETI concept a chance of success, so the target star has to be very close to the ecliptic plane. With its nearly circular orbit and its semi-major axis 215 times larger than the solar radius, the Earth has a mean transit probability < 0.5% for any random star of the solar neighborhood. 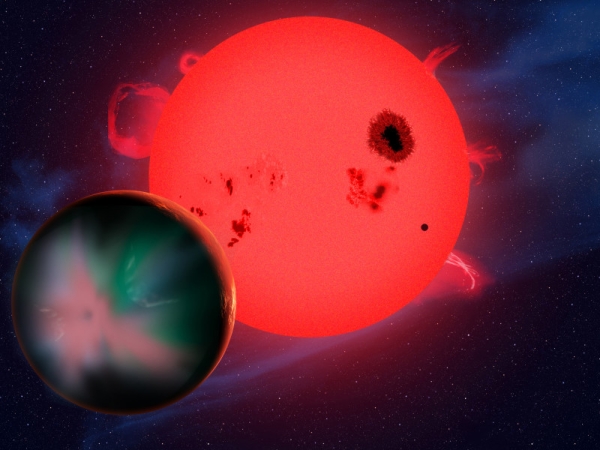 Image: An artist’s depiction of an active red dwarf star like Wolf 359 orbited by a planet. Credit: David A. Aguilar.

In other words, because the Earth transits the Sun as seen from Wolf 359, our planet would pass through any communication beam between the star and a local probe once per orbit. Thus a signal to Wolf 359 from an FICD in our Sun’s gravitational lensing region could in principle be detected. Gillon and Burdanov put the idea to the test using the TRAPPIST-South and SPECULOOS Southern Observatory in Chile, in a search “sensitive enough to detect constant emission with emitting power as small as 1W.”

The result: No detections. This could indicate that no probes exist within the Solar System using these methods, or at least that such a probe did not transmit during the observations. Indeed, the list of hypotheses to explain a null result is so large that no conclusion can be drawn. No detection simply means no detection.

But the observations lead us further to consider the spectral range of possible emissions from FICD to star. This is going to change depending on the star. Remember that using gravitational lensing to enable communications forces the receiver to face the host star, blocking its light with some kind of occulter (or perhaps a coronagraph) while enabling the signal to be received. Gillon and Burdanov note that Wolf 359 is a flare star with strong coronal activity, one with significant emission of X-ray and extreme ultraviolet light. The authors determine ‘a spectral zone of minimal emission’ that becomes interesting as a communications channel. Here let’s turn back to the paper, for this zone may be a better place to look:

While the very low emission of late-type M-dwarfs in this spectral range could be an issue for prebiotic chemistry on habitable planets (Rimmer et al. 2018), it could represent a nice spectral ’sweet spot’ for a GL-based communication to a late M-dwarf like Wolf 359 or TRAPPIST-1. Another advantage of using this wavelength range instead of the optical range is the improved emission rate, thanks to the narrower laser beams… These considerations suggest that the spectral ranges 300-920nm and 400-950nm probed by the TRAPPIST-South and SPECULOOS South observations could not correspond to the optimal spectral range for a GL-based communication [gravitational lensing] from the solar system to Wolf 359. The 150-250 nm spectral range could represent a more optimal spectral range for such GL-based interstellar communication to a cold and active late-type M-dwarf like Wolf-359.

Image: This is Figure 2 from the paper. Caption: Illustration showing the geometry of the hypothesized communication link from the solar system to the Wolf 359 system. The distances and stellar sizes are not to scale. Wolf 359 is shown at 3 different positions. Position 1 corresponds to the time of the emission of the photons that we receive from it now. Position 2 corresponds to its current position. Position 3 corresponds to the time it will receive the photons emitted now by the FICD. Credit: Gillon & Burdanov.

Probing this spectral range would require a space-based instrument, but it would be interesting to target these frequencies in a reproduction of the Wolf 359 observations. This paper recounts the first attempt to detect optical messages emitted from the Solar System to this star, and as such seems intended primarily as a way to shake out observing methods and explore how gravitational lens-based networking could be observed.

The paper is Gillon & Burdanov, “Search for an alien communication from the Solar System to a neighbor star,” submitted to Monthly Notices of the Royal Astronomical Society (preprint). Gillon’s 2014 paper is “ “A novel SETI strategy targeting the solar focal regions of the most nearby stars,” Acta Astronautica Vol. 94, Issue 2 (February 2014), 629-633 (abstract).