White Paper: Why We Should Seriously Evaluate Proposed Space Drives

Moving propulsion technology forward is tough, as witness our difficulties in upgrading the chemical rocket model for deep space flight. But as we’ve often discussed on Centauri Dreams, work continues in areas like beamed propulsion and fusion, even antimatter. Will space drives ever become a possibility? Greg Matloff, who has been surveying propulsion methods for decades, knows that breakthroughs are both disruptive and rare. But can we find ways to increase the odds of discovery? A laboratory created solely to study the physics issues space drives would invoke could make a difference. There is precedent for this, as the author of The Starflight Handbook (Wiley, 1989) and Deep Space Probes (Springer, 2nd. Ed., 2005) makes clear below. 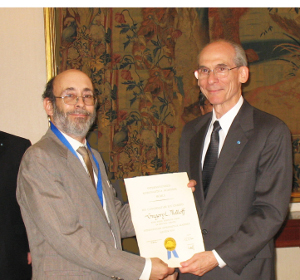 Image: Gregory Matloff (left) being inducted into the International Academy of Astronautics by JPL’s Ed Stone.

One the other hand, humanity seems poised for the long-predicted but oft-delayed breakout into the solar system. United States and Chinese national space programs will compete for lunar resources. Elon Musk’s SpaceX has its sights fixed on establishing human settlements on Mars. Jeff Bezos’ Blue Origin is concentrating on construction of in-space settlements of increasing population and size.

Because of the discovery of a potentially habitable planet circling Proxima Centauri and the possibility of other worlds circling in the habitable zones of Alpha Centauri A and B, one wonders how many decades it will take for an in-space settlement with a mostly closed ecology to begin planning for a change of venue from Sol to Centauri.

Consulting the literature reveals that controlled (or partially controlled) nuclear fusion and the photon sail are today’s leading contenders to propel such a venture. But the literature also reveals that travel times of 500-1,000 years are expected for human-occupied vessels propelled by fusion or radiation pressure.

Before interstellar mission planners finalize their propulsion choice, an ethical question must be addressed. In the science-fiction story “Far Centaurus”, originally published by A, E. van Vogt in 1944, the crew of a 500-year sleeper ship to the Centauri system awakens to learn that they must go through customs at the destination. During their long interstellar transit, a breakthrough had occurred leading to the development of a hyper-fast warp drive.

We simply must evaluate all breakthrough possibilities, no matter how far-fetched they seem, before planning for generation ships. The initial crews of these ships and their descendants must be confident that they will be the first humans to arrive at their destination. Otherwise it is simply not fair to dispatch them into the void.

Recently, I was a guest on Richard Hoagland’s radio show “Beyond Midnight”. Although the discussion included such topics as the James Webb Space Telescope, panpsychism, stellar engineering and ‘Oumuamua, I was particularly intrigued when the topic of space drives came up.

Richard is especially interested in possible ramifications of Bruce E. DePalma’s spinning ball experiment, which has not been investigated in depth. He later sent along a 2014 e-mail released to the public from physics Nobel Prize winner Brian D. Josephson discussing another proposed space-drive candidate, the Nassikas thruster. Professor Josephson is of the opinion that this device is well worth further study, writing this:

The Nassikas thruster apparently produced a thrust, both when immersed in its liquid nitrogen bath, and for a short period while suspended in air, until it warmed to above the superconductor critical temperature, this thrust presenting itself as an oscillating motion of the pendulum biased in a particular direction. If this displacement is due to a new kind of force, this would be an important observation; however, until better controlled experiments are performed it is not possible to exclude conventional mechanisms as the source of the thrust.

It is in this area of controlled experiments that we need to move forward. A little research on the Web revealed that there are a fair number of candidate space drives awaiting consideration. Most of these devices are untested. DARPA, NASA and a few other organizations have applied a small amount of funds in recent years to test a few of them—notably the EMdrive and the Mach Effect Thruster.

Experimental analysis of proposed space drives has not always been done on such a haphazard basis. Chapter 13 of my first co-authored book (E. Mallove and G. Matloff, The Starflight Handbook, Wiley, NY, 1989) discusses a dedicated effort to evaluate these devices. It was coordinated by engineer G. Harry Stine, retired USAF Colonel William O. Davis (who had formerly directed the USAF Office of Scientific Research) and NYU physics professor Serge Korff.

Between 1996 and 2002, NASA operated a Breakthrough Physics Program. Marc G. Millis, who coordinated that effort, has contributed here on Centauri Dreams a discussion of the many hoops a proposed space drive must jump through before it is acknowledged as a true Breakthrough [see Marc Millis: Testing Possible Spacedrives]. These ideas were further examined in the book Marc edited with Eric Davis, Frontiers of Propulsion Science, where many such concepts were subjected to serious scientific scrutiny. When I discussed all this in emails with Marc, he responded:

“The dominant problem is the “lottery ticket” mentality (a DARPA norm), where folks are more interested in supporting a low-cost long-shot, rather than systematic investigations into the relevant unknowns of physics. In the ‘lottery ticket’ approach, interest is cyclical depending if there is someone making a wild claim (usually someone the sponsor knows personally – rather than by inviting concepts from the community). With that hype, funding is secured for ‘cheap and quick’ tests that drag out ambiguously for years (no longer quick, and accumulated costs are no longer cheap). The hype and null tests damage the credibility of the topic and interest wanes until the next hot topic emerges. That is a lousy approach.

“That taint of both the null results and ‘lottery ticket’ mentality is why the physics community ignores such ambitions. I tried to attract the larger physics community by putting the emphasis on the unfinished physics, and made some headway there. When the emphasis is on credibility (and funding available), physicists will indeed pursue such topics and do so rigorously. And they will more quickly drop it again if/when the lottery ticket advocates step up again.”

Marc advocates a strategic approach, which he tried to establish as the preferred norm at NASA BPP, thus identifying the most ‘relevant’ open question in physics, and then getting reliable research done on those topics, thereafter letting these guide future inquiries. He believes that the most relevant open questions in physics deal with the source (unknown) and deeper properties of inertial frames (conjectured). Following those unknowns are the additional unfinished physics of the coupling of the fundamental forces (including neutrino properties).

In light of this pivotal period in space history and the ever-increasing contributions of private individuals and organizations, it seems reasonable to conclude that now is an excellent time to establish a well funded facility to continue the work of the Stine et al. team and the NASA Breakthrough Propulsion Physics program.

Next post: Unusual Transient: A New Kind of Magnetar?