Before getting into the paper I want to discuss today, I want to mention the new biography of John von Neumann by Ananyo Bhattacharya. I make no comment on The Man from the Future (W. W. Norton & Company, 2022) yet because while I have a copy, I haven’t had time to read it. But be aware that it’s out there – it’s getting good reviews, and given the impact of this remarkable figure on everything from programmable computers to game theory and the interstellar dispersion of civilizations, it’s a book you’ll at least want to stick on your reference list. 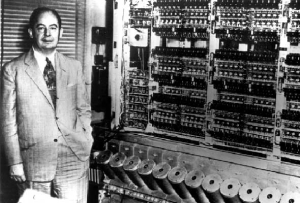 I figure anyone who masters calculus by the age of eight, as von Neumann is reputed to have done, is going to turn out to make a substantial contribution somewhere. I’m also interested in how polymaths function, moving with what seems effortless ease through diverse fields of study and somehow leaving their mark on each. What a contrast to our age of micro-specialization, where relentless drilling down into a single topic – and this seems true of most academic disciplines – is the mode of choice.

Image: John von Neumann, shown here with technology that might have been more to his taste, the 18,000 vacuum-tube strong ENIAC. One can only wonder what the sybaritic mathematician would have made of quantum computing. If only he were here to tell us.

It’s a good time for this book to come out, because von Neumann isn’t exactly in the spotlight these days. In a review in Science, Dov Greenbaum and Mark Gerstein note that he seems to have dropped out of public view:

In 2022…von Neumann could be the smartest person most people have never heard of. To wit, Google Trends shows that his online popularity last year was almost an order of magnitude less than that of Alan Turing, a contemporary in computing; Erwin Schrödinger, a predecessor in quantum mechanics; and Stephen Wolfram, a successor in the world of automata.

All fame is fleeting, but it’s also mutable, and the Bhattacharya biography should go some distance in pumping up von Neumann’s recognition. But let’s talk interstellar, where his name comes up today because Greg Matloff has just published a new paper dealing with what we now call ‘von Neumann probes.’ By this we simply mean probes that are self-replicating, a notion that originated with von Neumann and has now gone on to wide-ranging study. Throw self-replication and interstellar probes together and you generate various notions about how long it takes to populate the entire galaxy, as found in the work of, for example, Frank Tipler, Michael Hart and others.

Most of those exploring this space have been what Milan Ćirković calls ‘contact pessimists,’ who point out that if von Neumann probes could visit all stars with habitable planets in an entire galaxy, and do this within a small fraction of the galaxy’s age, their existence should be obvious. A more subtle school of thought holds that 1) dispersion need not be uniform and 2) a von Neumann probe may already be in our own Solar System, much less others, for we have only begun to explore deep space.

We can imagine these probes as having the built-in intelligence to make the interstellar crossing, which could be on the order of tens of thousands of years or more given that no biological crews need be involved. Around a target star, such a probe uses local resources – mining a native asteroid system, perhaps – to produce a new probe that, in turn, moves on to the next nearest star, or whatever target it chooses. Robert Freitas has considered self-replication in terms of nanotechnology, in which the size of the probe may be reduced to something as tiny as a needle packed with assemblers.

I come back to the question of biological crews, for without them (or perhaps given probes that carry biological materials that can be activated at destination), the von Neumann probes are free of the massive constraints of species lifespans. Miniaturize a probe to nanotechnological levels and a space-based solar-pumped laser array can push it up to relativistic velocities, possibly using materials like graphene or some kind of future metamaterial at levels of thickness no more than a single atom. But Matloff believes a 20-nm aluminum sail performing an Oberth maneuver (close pass by the Sun followed by a propulsive burn to maximize the gravity slingshot) could reach speeds in the range of 300 kilometers per second. That translates to one light year every 1,000 years.

Either way, we have a method to move human technologies out into the galaxy once our engineering is up to the challenge – the physics behind the project do not preclude this. So let’s imagine that we or some other civilization reach a stage in which we can build von Neumann probes and set them on their journeys. Matloff develops a conservative estimate of the expansion rate of a civilization using such probes.

Because of the vast canvas of time we have to work with given the age of our galaxy, we can afford to be quite conservative in our assumptions. Suppose that to minimize transit times, we say that civilizations doing this send out probes only when another star makes a close approach to the parent probe’s planetary system. Remember, the goal here is the eventual placement of probes galaxy-wide. We give up on all notions of probes reaching destinations within the lifetime of those who build them, even the lifetime of their civilization!

This gets intriguing, based on current data. The second data release of the Gaia space observatory tells us that a star like the Sun will pass within one light year of the Sun every half million years or so. This is, Matloff notes, a pretty conservative figure, for Gaia underestimates the number of low-mass red dwarfs that might also serve. Working the math, we come up with an estimated rate of expansion, granting that some stellar systems will not be suitable. After 500,000 years, we have but two occupied stellar systems. After 18 million years, we have 68.7 billion systems. Says Matloff:

This approach is only an approximation; not all stellar systems will be suitable for occupation by von Neumann probes, and some close stellar encounters will be repeated. But it does indicate that not many long-lived space-faring civilizations that deploy von Neumann probes are required to occupy the galaxy. Even if the slowest interstellar propulsion technique presented above — unpowered giant planet gravity assists — is the one selected by ET, the required galactic occupation time is not substantially increased.

Ah, the joys of exponential growth. I’m reminded of George Gamow’s treatment of such growth in his delightful One Two Three… Infinity, first published in 1947. With probes generating new probes and continuing to push outward, it becomes clear that it would not take a great number of spacefaring civilizations to occupy the entire galaxy even using nothing more than sundiver maneuvers or even gravity assists around gas giant planets to serve as the propulsion technique. Obviously, the process quickens if we reach relativistic speeds with nanotech probes that can exploit the resources they find. The process is fast enough that it’s inevitable to ask where such probes might be located if they are already here. 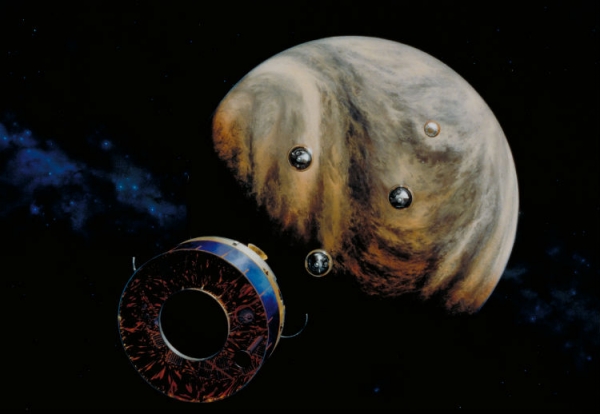 But first, why would a civilization choose to mount a campaign to spread through the galaxy using such probes? In the next post, we’ll consider a range of possible motivations.

Next post: Why Fill a Galaxy with Self-Reproducing Probes?