Although I’ve often seen Arthur Conan Doyle’s Sherlock Holmes cited in various ways, I hadn’t chased down the source of this famous quote: “When you have eliminated all which is impossible, then whatever remains, however improbable, must be the truth.” Gerald Jackson’s new paper identifies the story as Doyle’s “The Adventure of the Blanched Soldier,” which somehow escaped my attention when I read through the Sherlock Holmes corpus a couple of years back. I’m a great admirer of Doyle and love both Holmes and much of his other work, so it’s good to get this citation straight.

As I recall, Spock quotes Holmes to this effect in one of the Star Trek movies; this site’s resident movie buffs will know which one, but I’ve forgotten. In any case, a Star Trek reference comes into useful play here because what Jackson (Hbar Technologies, LLC) is writing about is antimatter, a futuristic thing indeed, but also in Jackson’s thinking a real candidate for a propulsion system that involves using small amounts of antimatter to initiate fission in depleted uranium. The latter is a by-product of the enrichment of natural uranium to make nuclear fuel.

Both thrust and electrical power emerge from this, and in Jackson’s hands, we are looking at a mission architecture that can not only travel to another star – the paper focuses on Proxima Centauri as well as Epsilon Eridani – but also decelerate. Jackson has been studying the matter for decades now, and has presented antimatter-based propulsion concepts for interstellar flight at, among other venues, symposia of the Tennessee Valley Interstellar Workshop (now the Interstellar Research Group). In the new paper, he looks at a 10-kilogram scale spacecraft with the capability of deceleration as well as a continuing source of internal power for the science mission. 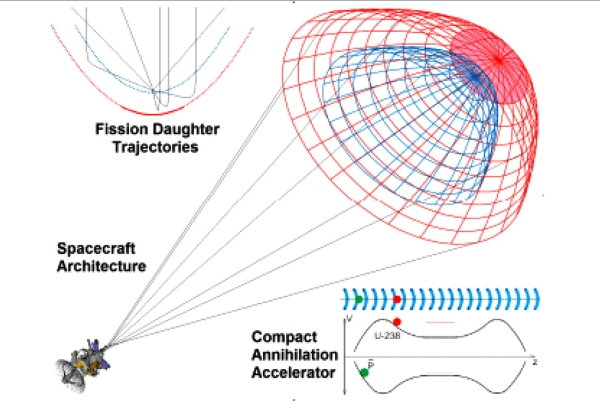 On the matter of the impossible, the quote proves useful. Jackson applies it to the propulsion concepts we normally think of in terms of making an interstellar crossing. This is worth quoting:

Applying this Holmes Method to space propulsion concepts for exoplanet exploration, in this paper the term “impossible” is re-interpreted arbitrarily to mean any technology that requires: 1) new physics that has not been experimentally validated; 2) mission durations in excess of one thousand years; and 3) material properties that are not currently demonstrated or likely to be achievable during this century. For example, “warp drives” can currently be classified as impossible by criterion #1, and chemical rockets are impossible due to criterion #2. Breakthrough Starshot may very well be impossible according to criterion #3 simply because of the needed material properties of the accelerating sail that must survive a gigawatt laser beam for 30 minutes. Though traditional nuclear thermal rockets fail due to criterion #2, specific fusion-based propulsion systems might be feasible if breakeven nuclear fusion is ever achieved.

Can antimatter supply the lack? The kind of mission Jackson has been analyzing uses antimatter to initiate fission, so we could consider this a hybrid design, one with its roots in the ‘antimatter sail’ Jackson and Steve Howe have described in earlier technical papers. For the background on this earlier work, you can start by looking at Antimatter and the Sail, one of a number of articles here on Centauri Dreams that has explored the idea.

In this paper, we move the antimatter sail concept to a deceleration method, with the launch propulsion being handed off to other technologies. The sail’s antimatter-induced fission is not used only to decelerate, though. It also provides a crucial source of power for the decades-long science mission at target.

If we leave the launch and long cruise of the mission up to other technologies, we might see the kind of laser-beaming methods we’ve looked at in other contexts as part of this mission. But if Breakthrough Starshot can develop a model for a fast flyby of a nearby star (moving at a remarkable 20 percent of lightspeed) via a laser array, various problems emerge, especially in data acquisition and return. On the former, the issue is that a flyby mission at these velocities allows precious little time at target. Successful deceleration would allow in situ observations from a stable exoplanet orbit.

That’s a breathtaking idea, given how much energy we’re thinking about using to propel a beamed-sail flyby, but Jackson believes it’s a feasible mission objective. He gives a nod to other proposed deceleration methods, which have included using a ‘magnetic sail’ (magsail) to brake against a star’s stellar wind. The problem is that the interstellar medium is too tenuous to slow a craft moving at a substantial percentage of lightspeed for orbital insertion upon arrival – Jackson considers the notion in the ‘impossible’ camp, whereas antimatter may come in under the wire as merely ‘improbable.’ That difference in degree, he believes, is well worth exploring.

The antimatter concept described generates a high specific impulse thrust, with the author noting that approximately 98 percent of antiprotons that stop within uranium induce fission. It turns out that antiproton annihilation on the nucleus of any uranium isotope – and that includes non-fissile U238 – induces fission. In Jackson’s design, about ten percent of the annihilation energy released is channeled into thrust.

Jackson analyzes an architecture in which the uranium “propagates as a singly-charged atomic ion beam confined to an electrostatic trap.” The trap can be likened in its effects to what magnetic storage rings do when they confine particle beams, providing a stable confinement for charged particles. Antiprotons are sent in the same direction as the uranium ions, reaching the same velocity in the central region, where the matter/antimatter annihilation occurs. Because the uranium is in the form of a sparse cloud, the energetic fission ‘daughters’ escape with little energy loss.

Here is Jackson’s depiction of an electrostatic annihilation trap. In this design, both the positively charged uranium ions and the negatively charged antiprotons are confined.

Image: This is Figure 1 from the paper. Caption: Axial and radial confinement electrodes (top) and two-species electrostatic potential well (bottom) of a lightweight charged-particle trap that mixes U238 with antiprotons.

A workable design? The author argues that it is, saying:

Longitudinal confinement is created by forming an axial electrostatic potential well with a set of end electrodes indicated in figure 1. To accomplish the goal of having oppositely charged antiprotons and uranium ions traveling together for the majority of their motion back and forth (left/right in the figure) across the trap, this electrostatic potential has a double-well architecture. This type of two-species axial confinement has been experimentally demonstrated [53].

The movement of antiprotons and uranium ions within the trap is complex:

Decelerating at Proxima Centauri in this scheme involves a propulsive burn lasting ten years as the craft sheds kinetic energy on the long arc into the planetary system. Under these calculations, a 200 year mission to Proxima requires 35 grams of total antiproton mass. Upping this to a 56-year mission moving at 0.1 c demands 590 grams.

Addendum: I wrote ’35 kilograms’ in the above paragraph before I caught the error. Thanks, Alex Tolley, for pointing this out!

Current antimatter production remains in the nanogram range. What to do? In work for NASA’s Innovative Advanced Concepts office, Jackson has argued that despite minuscule current production, antimatter can be vastly ramped up. He believes that production of 20 grams of antimatter per year is a feasible goal. More on this issue, to which Jackson has been devoting his life for many years now, in the next post.