Are there limits on how big a moon can be to orbit a given planet? All we have to work with, in the absence of confirmed exomoons, are the satellites of our Solar System’s planets, and here we see what appears to be a correlation between a planet’s mass and the mass of its moons. At least up to a point – we’ll get to that point in a moment. 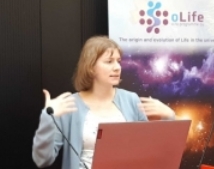 But consider: As Vera Dobos (University of Groningen, Netherlands) and colleagues point out in a recent paper for Monthly Notices of the Royal Astronomical Society, if we’re talking about moons forming in the circumplanetary disk around the young Sun, the total mass is on the order of 10-4Mp. Here Mp is the mass of the planet. A planet with 10 times Jupiter’s mass, given this figure, could have a moon as large as a third of Earth’s mass, and so far observational evidence supports the idea that moons can form regularly in such disks. There is no reason to believe we won’t find exomoons by the billions throughout the galaxy.

The mass calculation above, though, is what is operative when moons form in a circumplanetary disk. To understand our own Moon, we have to talk about an entirely different formation mechanism: Collisions. Here we’re in the fractious pin-ball environment of a system growing and settling, as large objects find their way into stable orbits. Collisions change the game: Moons are now possible at larger moon-to-planet ratios with this second mechanism – . our Moon has a mass of 10−2 Earth masses. Let’s also consider moons captured by gravitational interactions, of which the prime example in our system is probably Triton.

What we’d like to find, of course, is a large exomoon, conceivably of Earth size, orbiting a planet in the habitable zone, or perhaps even a binary situation where two planets of this size orbit a common barycenter (Pluto and Charon come closest in our system to this scenario). Bear in mind that exoplanet hunting, as it gets more refined, is now turning up planets with masses lower than Earth’s and in some cases lower than Mars. As we move forward, then, moons of this size range should be detectable.

But what a challenge exomoon hunters have set for themselves, particularly when it comes to finding habitable objects. The state of the art demands using radial velocity or transit methods to spot an exomoon, but both of these work most effectively when the host planet is closest to its star, a position which is likely not stable for a large Moon over time. Back off the planet’s distance from the star into the habitable zone and now you’re in a position that favors survival of the moon but also greatly complicates detection.

What Dobos and team have done is to examine exomoon habitability in terms of energy from the host star as well as tidal heating, leaving radiogenic heating (with all its implications for habitability under frozen ocean surfaces) out of the picture. Using planets whose existence is verified, as found in the Extrasolar Planets Encyclopedia, they run simulations on hypothetical exomoons that fit their criteria – these screen out planets larger than 13 Jupiter masses and likewise host stars below 0.08 solar masses.

Choosing only worlds with known orbital period or semimajor axis, they run 100,000 simulations for all 4140 planets to determine the likelihood of exomoon habitability. 234 planets make the cut, which for the purposes of the paper means exomoon habitability probabilities of ≥ 1 percent for these worlds. 17 planets of the 234 show a habitability probability of higher than 50 percent, so these are good habitable zone candidates if they can indeed produce a moon around them. It’s no surprise to learn that habitable exomoons are far more likely for planets already orbiting within their star’s habitable zone. But I was intrigued to see that this is not iron-clad. Consider:

Beyond the outer boundary of the HZ, where stellar radiation is weak and one would expect icy planets and moons, we still find a large number of planets with at least 10% habitability probability for moons. This is caused by the non-zero eccentricity of the orbit of the host planet (resulting in periodically experienced higher stellar fluxes) and also by the tidal heating arising in the moon. These two effects, if maintained on a long time-scale, can provide enough supplementary heat flux to prevent a global snowball phase of the moon (by pushing the flux above the maximum greenhouse limit).

More good settings for science fiction authors to mull over! 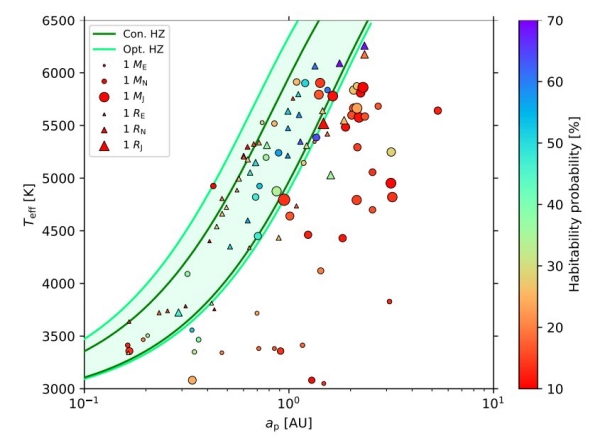 Image: This is Figure 2 from the paper. Caption: Habitability probability for exomoons around known exoplanets on the semi-major axis – stellar effective temperature plane. Planets with known masses (with or without radius data) are marked with circles, planets with known radii only are marked with triangles. Colours of the markers correspond to the fraction of habitable moons and the sizes of the markers represent the sizes of the planets as shown in the legend. Note that the legend only shows three
representative sizes (Earth, Neptune and Jupiter), while the size of the markers in the plot is scaled to the real size of the planets. Green curves represent the borders of the circumstellar habitable zone for a 1 Earth-mass planet: dark green for the consevative HZ (Con. HZ) and light green for the optimistic HZ (Opt. HZ). Credit: Dobos et al. 2022.

Given that the spectral type of over half of the stars in the Extrasolar Planets Encyclopedia is not listed, there is a good deal of play in these results, although the authors point to the mitigating effect of gas giant magnetospheres as shields against incoming stellar radiation for potentially habitable moons. Even so, stellar type is clearly an important factor, and it’s also noteworthy that while the paper mentions planet migration, its effects on exomoons are not under consideration. This is about as much as the authors have to say about migration:

It is likely that the giant planets in the circumstellar HZ were formed at larger distances from the star and then migrated inwards to their current orbit (see for example Morbidelli 2010). During the orbital migration they can lose some or all of their moons, especially if the moon orbit is close to the planet (Namouni 2010; Spalding et al. 2016). Depending on the physical and orbital parameters of the planet and the moon, as well as on the starting and final semi-major axes of the planet, some moons can survive this process, and new moons can also be captured during or after the migration of the planet.

Just how migration would affect the results of this study is thus an open question. What we do wind up with is what the authors consider a ‘target list’ for exomoon observations, although one replete with challenges. Most of these potential exomoons would orbit planets whose orbital period is in the hundreds of days, planets like Kepler-62f, with a 268 day period and a 53 percent habitability probability for an exomoon. This is an interesting case, as stable moon orbits are likely around this 1.38 Earth radius world. But what a tricky catch for both our exomoon detection techniques.

Because many of the planets in the target list are gas giants, we have to consider the probability that more than a single moon may orbit them, perhaps even several large moons where life might develop. That’s a scenario worth considering as well, independent emergence of life upon two moons orbiting the same exoplanet. But it’s one that will have to wait as we refine exomoon scenarios in future observations.

The paper is Dobos et al., “A target list for searching for habitable exomoons,” accepted at Monthly Notices of the Royal Astronomical Society 05 May 2022 (abstract / preprint). Thanks to my friend Antonio Tavani for the heads-up on this work.