We just looked at how gravitational microlensing can be used to analyze the mass of a star, giving us a method beyond the mass-luminosity relationship to make the call. And we’re going to be hearing a lot more about microlensing, especially in exoplanet research, as we move into the era of the Nancy Grace Roman Space Telescope (formerly WFIRST), which is scheduled to launch in 2027. A major goal for the instrument is the expected discovery of exoplanets by the thousands using microlensing. That’s quite a jump – I believe the current number is less than 100.

For while radial velocity and transit methods have served us well in establishing a catalog of exoplanets that now tops 5000, gravitational microlensing has advantages over both. When a stellar system occludes a background star, the lensing of the latter’s light can tell us much about the planets that orbit the foreground object. Whereas radial velocity and transits work best when a planet is in an orbit close to its star, microlensing can detect planets in orbits equivalent to the gas giants in our system. 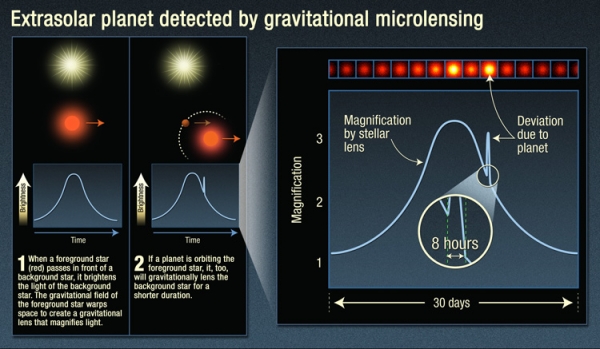 Image: This infographic explains the light curve astronomers detect when viewing a microlensing event, and the signature of an exoplanet: an additional uptick in brightness when the exoplanet lenses the background star. Credit: NASA / ESA / K. Sahu / STScI).

Moreover, we can use the technique to detect lower-mass planets in such orbits, planets far enough, for example, from a G-class star to be in its habitable zone, and small enough that the radial velocity signature would be tricky to tease out of the data. Not to mention the fact that microlensing opens up vast new areas for searching. Consider: TESS deliberately works with targets nearby, in the range of 100 light years. Kepler’s stars averaged about 1000 light years. Microlensing as planned for the Roman instrument will track stars, 200 million of them, at distances around 10,000 light years away as it looks toward the center of the Milky Way.

So this is a method that lets us see planets at a wide range of orbital distances and in a wide range of sizes. The trick is to work out the mass of both star and planet when doing a microlensing observation, which brings machine learning into the mix. Artificial intelligence algorithms can parse these data to speed the analysis, a major plus when we consider how many events the Roman instrument is likely to detect in its work.

The key is to find the right algorithms, for the analysis is by no means straightforward. Microlensing signals involve the brightening of the light from the background star over time. We can call this a ‘light curve,’ which it is, making sure to distinguish what’s going on here from the transit light curve dips that help identify exoplanets with that method. With microlensing, we are seeing light bent by the gravity of the foreground star, so that we observe brightening, but also splitting of the light, perhaps into various point sources, or even distorting its shape into what is called an Einstein ring, named of course after the work the great physicist did in 1936 in identifying the phenomenon. More broadly, microlensing is implied by all his work on the curvature of spacetime.

However the light presents itself, untangling what is actually present at the foreground object is complicated because more than one planetary orbit can explain the result. Astronomers refer to such solutions as degeneracies, a term I most often see used in quantum mechanics, where it refers to the fact that multiple quantum states can emerge with the same energy, as happens, for example, when an electron orbits one or the other way around a nucleus. How to untangle what is happening?

A new paper in Nature Astronomy moves the ball forward. It describes an AI algorithm developed by graduate student Keming Zhang at UC-Berkeley, one that presents what the researchers involved consider a broader theory that incorporates how such degeneracies emerge. Here is the university’s Joshua Bloom, in a blog post from last December, when the paper was first posted to the arXiv site:

“A machine learning inference algorithm we previously developed led us to discover something new and fundamental about the equations that govern the general relativistic effect of light- bending by two massive bodies… Furthermore, we found that the new degeneracy better explains some of the subtle yet pervasive inconsistencies seen [in] real events from the past. This discovery was hiding in plain sight. We suggest that our method can be used to study other degeneracies in systems where inverse-problem inference is intractable computationally.”

What an intriguing result. The AI work grows out of a two-year effort to analyze microlensing data more swiftly, allowing the fast determination of the mass of planet and star in a microlensing event, as well as the separation between the two. We’re dealing with not one but two brightness peaks in the brightness of the background star, and trying to deduce from this an orbital configuration that produced the signal. Thus far, the different solutions produced by such degeneracies have been ambiguous. 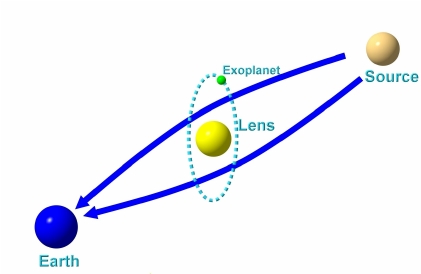 Image: Seen from Earth (left), a planetary system moving in front of a background star (source, right) distorts the light from that star, making it brighten as much as 10 or 100 times. Because both the star and exoplanet in the system bend the light from the background star, the masses and orbital parameters of the system can be ambiguous. An AI algorithm developed by UC Berkeley astronomers got around that problem, but it also pointed out errors in how astronomers have been interpreting the mathematics of gravitational microlensing. Credit: Research Gate.

Zhang and his fellow researchers applied microlensing data from a wide variety of orbital configurations to run the new AI algorithm through its paces. Let’s hear from Zhang himself:

“The two previous theories of degeneracy deal with cases where the background star appears to pass close to the foreground star or the foreground planet. The AI algorithm showed us hundreds of examples from not only these two cases, but also situations where the star doesn’t pass close to either the star or planet and cannot be explained by either previous theory. That was key to us proposing the new unifying theory.”

Thus to existing known degeneracies labeled ‘close-wide’ and ‘inner-outer,’ Zhang’s work adds the discovery of what the team calls an ‘offset’ degeneracy. An underlying order emerges, as the paper notes, from the offset degeneracy. In the passage from the paper below, a ‘caustic’ defines the boundary of the curved light signal. Italics mine:

…the offset degeneracy concerns a magnification-matching behaviour on the lens-axis and is formulated independent of caustics. This offset degeneracy unifies the close–wide and inner–outer degeneracies, generalises to resonant topologies, and upon re- analysis, not only appears ubiquitous in previously published planetary events with 2-fold degenerate solutions, but also resolves prior inconsistencies. Our analysis demonstrates that degenerate caustics do not strictly result in degenerate magnifications and that the commonly invoked close–wide degeneracy essentially never arises in actual events. Moreover, it is shown that parameters in offset degenerate configurations are related by a simple expression. This suggests the existence of a deeper symmetry in the equations governing 2-body lenses than previously recognised.

The math in this paper is well beyond my pay grade, but what’s important to note about the passage above is the emergence of a broad pattern that will be used to speed the analysis of microlensing lightcurves for future space-and ground-based observations. The algorithm provides a fit to the data from previous papers better than prior methods of untangling the degeneracies, but it took the power of machine learning to work this out.

It’s also noteworthy that this work delves deeply into the mathematics of general relativity to explore microlensing situations where stellar systems include more than one exoplanet, which could involve many of them. And it turns out that observations from both Earth and the Roman telescope – two vantage points – will make the determination of orbits and masses a good deal more accurate. We can expect great things from Roman.

Next post: A Radium Age Take on the ‘Wait Equation’