We’ve looked before at the growing interest in exploring near-Earth space for evidence of probes from other civilizations that may have been sent in the distant past to monitor and report home on the progression of life in our Solar System. If extraterrestrial civilizations exist, the idea that one of them might have explored our system and left behind what Jim Benford calls a ‘lurker’ probe is sensible enough. We send probes to places we want to learn more about, and we would certainly have probes around the nearest stars if we had the means. Breakthrough Starshot is an example of such interest. A century from now, human probes to other stars may be commonplace.

Various places to search for lurker probes have been suggested, from Lagrange points – where objects placed there tend to stay put, with minimal need for fuel consumption – to barely studied Earth co-orbitals to the surface of the Moon. But what about Earth orbit? Surveillance of the Earth could involve probes in long-term high altitude orbits, the geosynchronous realm of our present-day communication satellites, which can always remain above the same location on the planet. As opposed to low-Earth orbits, GEO offers stable conditions over millions, perhaps billions of years.

The immediate objection is that looking into Earth’s sky is confounded by multiple factors. We have close to 5,000 satellites already in one kind of Earth orbit or another. We must also cope with centimeter-scale debris in lower orbits that seems to be increasing over time, another reason why higher orbits would be preferable for searching for something anomalous. Even so, human contamination near our planet means that using modern survey tools like Pan-STARRS is complicated and time-consuming.

If we had a time machine, we could see the sky as it was before Sputnik. But as Beatriz Villarroel and colleagues note in a new paper in Acta Astronautica, we have much easier ways of doing this. Photographic plate projects like the First Palomar Sky Survey (POSS-1) are available from earlier periods, and Villarroel (Stockholm University) is behind a new citizen science project called VASCO (Vanishing & Appearing Sources during a Century of Observations) to exploit these resources.

VASCO builds upon an earlier project of the same name in which Villarroel and colleagues analyzed old sky catalogs looking for stars that appear in the older plates but are not found in later imaging. In the earlier work, about 100 red transients turned up, interesting objects that likely represent flare stars worth follow-up investigation. The image below is drawn from this work (citation at the end of the article).

Image: A source visible in an old plate (left, seen as the bright source at the centre of the square) has disappeared in a later plate (right). Credit: Villarroel et al. (2019).

With the online VASCO project, the focus shifts to human volunteers, who work in the cause of finding anomalous features that may point to a technology in Earth orbit before the first Earth satellite flew. While VASCO uses the POSS-1 dataset, other plate material is available from the Lick and Sonneberg observatories and the Carte du Ciel, a decades-long mapping project from the early 20th Century. Interest in photographic plates is quickening because this is a resource ripe for analysis with our new digital tools. Thus projects like DASCH (Digital Access to a Sky Century @ Harvard), which has spent two decades thus far scanning photographic plates and archiving data.

Long-term Centauri Dreams readers will know that I champion the idea of using older datasets, which are priceless windows into the pre-digital sky. How we can exploit this material and expand our understanding with our new digital tools is an exciting area of research, and here we have the great benefit that the data have already been collected. We need build no new observatories to acquire information, but can concentrate on mining older plates for what may turn out to be new discoveries.

In the case of VASCO, the trick is to come up with the necessary filters to isolate anything that may be artificial, i.e., a technosignature. Low Earth orbits remain relatively uninteresting because they do not fit the long-term survival we’re presuming in a lurker, although fast-moving point sources in a long exposure can readily show natural objects like asteroids or meteors. An object in geosynchronous orbit may throw a glint when observer and reflective surface happen to be precisely aligned. But single glints are not enough. The authors are after indicators that cannot be confused with natural phenomena and are not the result of instrumental or photographic defects. 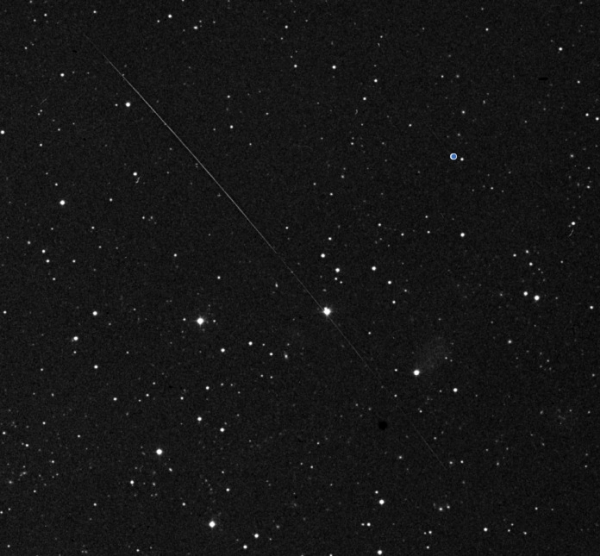 Image: This is Figure 2 from the paper. Caption: Fig. 2. A typical streak. The POSS-I streak found in a red image identified through the citizen science project shows the effect of tumbling and is a possible near-Earth asteroid but is also a possible candidate. The streak is roughly 40 arcminutes in length and unlikely to be a meteor with its angular velocity and pattern of first being dim, then brightens, and then dims once again. The typical exposure time for POSS-I images is about 50 minutes. Credit: Villarroel et al.

While a reflective satellite can produce a short, powerful glint, the glint shows a Point Source Function (PSF) shape that does not help us much. A point source is one that is smaller than maximum resolution of the equipment. An image of it seems to spread, a factor we must consider because of the diffraction of the telescope aperture. From the paper:

Satellites that are uniformly illuminated at low- or medium altitude orbits leave clear streaks in the long time exposures from old photographic plates as they move at speeds projected as hundreds of arcseconds per second. At higher or GEO altitudes the presence of satellites or space debris can be detected by fast, transient glints caused by surface reflection of the Sun. When the reflective surface of the satellite coincides perfectly with the position of the observer and the Sun, a short but powerful glint can be observed. Despite the fast movement of the satellite, the very brief reflective alignment means that the resulting short duration glint has a Point Source Function (PSF)-like shape…

And it turns out that a single glint on older photographic plates is indistinguishable from an astrophysical transient. In fact, ground-based searches for such transients today often pull up solar reflections from artificial objects in geosynchronous orbits. Moreover, 75 percent of glints from GEO, while not associated with any known object, are almost certainly centimeter-sized human space debris.

Going beyond the single glint, then, the paper analyzes multiple glints, and notes in particular glints with point source functions that occur along a straight line – which can occur when a spinning object reflects sunlight – and triple glints, another sign of possible rotation. And indeed, multiple glints have been found in at least one image exposed in 1950, though it is impossible to rule out contamination or emulsion defects on old photographic plates. What the authors are after is something more reliable:

The smoking-gun observation that settles the question unequivocally, is the one of repeating glints with clear PSFs along a straight line in a long-exposure image. When an object spins fast around itself and when its reflective surface faces the Earth, some of its parts could reflect sunlight. That results in multiple glints following a trail in an image. The number of glints might depend on the geometry and the speed of the rotation of the object. An object with only one single reflective surface that spins slowly will produce fewer glints than an object with several reflective surfaces that, moreover, spins fast. From the period one can also determine the shape of the glinting object.

This, then, is the kind of signature Villarroel and colleagues hope to find during the course of the VASCO investigations:

An exciting aspect of these suggestions is that precisely these type of objects could be found during the course of the VASCO project [8], [29]. Among the many objects classified as “Vanished”, we could discover both single and multiple glint objects. Also through automatised methods, we seek to identify all cases of multiple glints within a small area of 10 × 10 arcmin2, and to see if any of these represent cases where the glints follow a straight line.

Image: This is Figure 5 from the paper. Caption: Fig. 5. Triple glints. An example of a triplet glints in a red POSS-I image from 1950s. The left column shows the POSS-I image, and the right column the Pan-STARRS image ( year 2015). The example is from Villarroel et al. (2021) [54] and uses the VASCO citizen science web interface. Credit: Villarroel et al.

A series of multiple glints along a line in photographic plate images, if found in the VASCO plates, would be of great interest, but there is a ticking clock, because trying to locate any such object today comes up against the growing volume of human-made space debris. The authors argue that searches for technosignatures in photographic plates should thus be done as soon as possible, and preferably performed on datasets beyond the POSS-1 material now used by VASCO.

A sky without human contamination in orbit is available through these plates, and if an object in geosynchronous orbit has been left behind – perhaps millions of years ago – as an observing platform or other kind of probe, this method is one way citizen science can be employed to spot it. Just how long a reflective surface can endure in an environment of dust grain and micrometeorite collisions is debatable, but of course we know nothing about what measures probe builders might take to protect their equipment. The authors think the imponderables keep VASCO a viable project.

The paper is Villarroel et al., “A glint in the eye: Photographic plate archive searches for non-terrestrial artefacts,” Acta Astronautica Vol. 194 (May 2022), 106-113 (full text). For earlier work, see Villarroel et al., “The Vanishing and Appearing Sources during a Century of Observations Project. I. USNO Objects Missing in Modern Sky Surveys and Follow-up Observations of a “Missing Star,” Astronomical Journal Vol. 159, No. 1 (2020) 8 (full text). Thanks to my friend Antonio Tavani for the pointer to the 2022 paper.