My prediction that we’re going to find evidence for exo-life around another star before we find it in our own Solar System is being challenged from several directions. Alex Tolley recently looked at the Venus Life Finder mission, a low-cost and near-term way to examine the clouds of the nearest planet for evidence of biology (see Venus Life Finder: Scooping Big Science). Now we learn of advances in a ten-year old project at the University of Hawai‘i at Manoa, where Anupam Misra and team have been working on remote sensing instruments to detect minute biomarkers. This one looks made to order for Mars, but it also by extension speaks to future rovers on a variety of worlds. 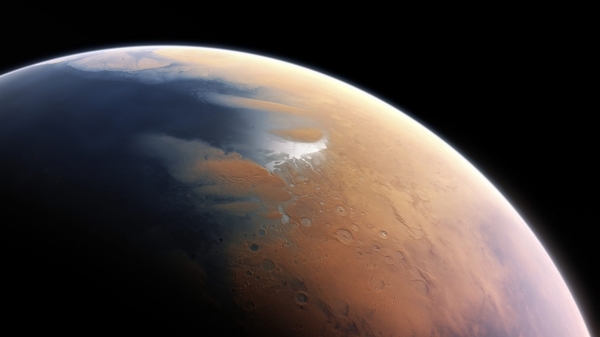 Image: This artist’s impression shows how Mars may have looked about four billion years ago. The young planet Mars would have had enough water to cover its entire surface in a liquid layer about 140 m deep, but it is more likely that the liquid would have pooled to form an ocean occupying almost half of Mars’s northern hemisphere, and in some regions reaching depths greater than 1.6 km. How can we best identify markers of early life, assuming they exist? Credit: NOVA Next / UH Manoa.

The challenge is immense, because the lifeforms in question may be tiny, and may have been extinct for millions, if not billions, of years. As Misra’s recent paper notes, organic chemicals formed by biology, or minerals produced by living organisms, are the kind of biomarkers research efforts have targeted. We’re talking about proteins, lipids and fossil residues, the detection of any of which on another planet would lock down the case for life off the Earth. Instruments that can sweep wide areas with sensors and deliver fast detection times are critical for invigorating the biomarker hunt.

Remote sensing is the operative term. Misra’s team have developed what they call a Compact Color Biofinder that, in the words of the paper, “detects trace quantities of organic matter in a large area at video speed.” Moreover, the device can operate from distances of a few centimeters up to five meters. The intent is to move quickly, scanning large areas to locate these biological tracers. The device draws on fluorescence, a short-lived signal that can be found in most biological materials, including amino acids, fossils, clays, sedimentary rocks, plants, microbes, bio-residues, proteins and lipids. According to the authors, fluorescence also figures into polycyclic aromatic hydrocarbon (PAHs) and abiotic organics, such as plastic or amino acids.

Misra, who is lead instrument developer at the Hawai‘i Institute of Geophysics and Planetology at the university, makes the case that these traces are still viable, and that the Compact Color Biofinder can tell the difference between mineral phosphorescence and organic phosphorescence in daylight conditions with measurement times in the realm of one microsecond. It can also distinguish between different organic materials. Says Misra:

“There are some unknowns regarding how quickly bio-residues are replaced by minerals in the fossilization process. However, our findings confirm once more that biological residues can survive millions of years, and that using biofluorescence imaging effectively detects these trace residues in real time.”

Demonstrating the fact is news that the device can detect the bio-residue of fish fossils from the Green River formation, a geological feature resulting from sedimentation in a series of lakes along the Green River in Colorado, Wyoming and Utah. The formation is thought to be between 34 and 56 million years old. The fish in question is Knightia spp, which untangles to several different species within the genus Knightia (spp stands for species pluralis, meaning several different species within the larger genus). The now extinct fish lived in freshwater lakes during the Eocene. The team examined 35 fish fossils, all of which still retained a significant quantity of bio-fluorescence.

Detection is from a distance of several meters and can be achieved over large areas, which should greatly accelerate the process of astrobiological detection on a planetary surface. From the paper:

To further test the detection capability of the Biofinder the camera lens was changed to a long working distance microscope objective, thus turning the instrument into a standoff fluorescence microscope. The same fossil was cut into several pieces to be imaged in cross-section (Fig. 1c). At the microscopic scale, fluorescence images (Fig. 1d) demonstrated the clear presence of organic material in the fossil by the characteristic fluorescence of organic matter detected using a 10× objective at a working distance of 54 mm. The brown color material has been known to paleontologists to be organic matter formed from residues of fish bones along with soft tissues20 and hence, we can say that the organic fluorescence comes from biological origin. 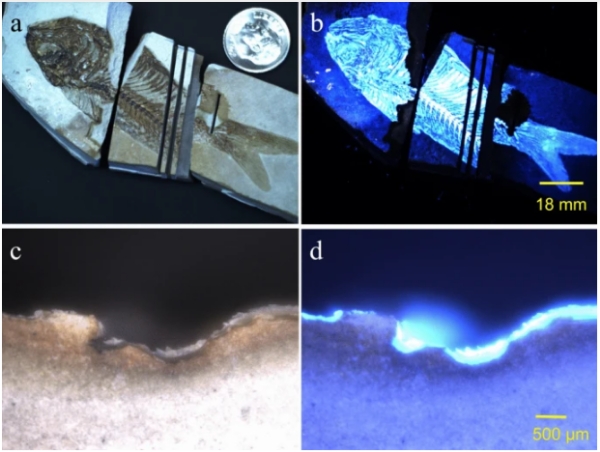 Image: This is Figure 1 from the paper. Caption: Biofinder detection of biological resides in fish fossil. (a) White light image of a Green River formation fish fossil, Knightia sp., from a distance of 50 cm using the Biofinder without laser excitation. (b) Fluorescence image of the fish fossil obtained by the Biofinder using a single laser pulse excitation, 1 µs detection time, and 3.6% gain on the CMOS detector. (c) Close-up white light image of the fish fossil cross-section using a 10× objective with 54 mm working distance showing the fish remains and rock matrix. (d) Fluorescence image with a single laser pulse excitation showing strong bio-fluorescence from the fish remains. Credit: Misra, et al., 2022.

So fluorescence imaging may join our toolkit for future rovers on other worlds, able to detect organisms that have been dead for millions of years by scanning large areas of terrain in short periods of time. The Biofinder detections were corroborated by a wide range of instruments, from laboratory spectroscopy analysis and scanning electron microscopy to fluorescence lifetime imaging microscopy. 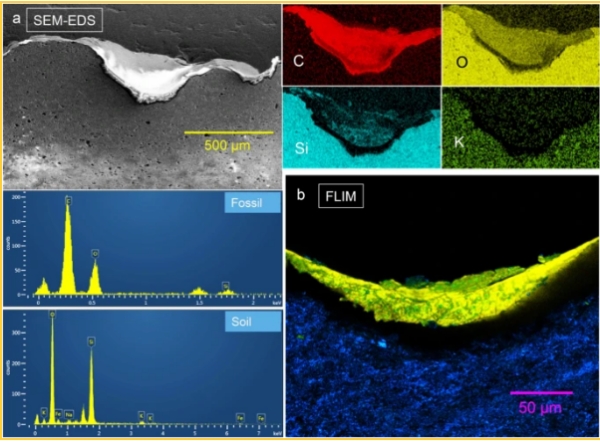 Image: This is Figure 3 from the paper. Caption: Confirmation of carbon and short-lived biofluorescence in fish fossil. (a) SEM–EDS analysis of the fish fossil cross-section showing that the fossil contains considerable quantities of carbon in comparison to the rock matrix. The rock matrix is rich in silica and has more oxygen than the fish. (b) FLIM image of the fossil cross-section showing strong bio-fluorescence in the fish (shown as false-coloured green-yellow region) with a lifetime of 2.7 ns. Credit: Misra et al.

The upshot: Biological residues can last for millions of years, and standoff bio-fluorescence imaging as used in the Compact Color Biofinder can detect them. Remote sensing is heating up in astrobiological circles, and I should mention two other ongoing projects: WALI (Wide Angle Laser Imaging enhancement to ExoMars PanCam) and OrganiCam, both based on fluorescence detection. The work of Misra and team indicates the method is sound, and should be capable of being deployed for large landscape surveys on future lander missions. The fact that the technology does not introduce contamination likewise speaks to its utility, says Sonia J. Rowley, a co-author of the paper and the biologist on the project:

“The Biofinder’s capabilities would be critical for NASA’s Planetary Protection program, for the accurate and non-invasive detection of contaminants such as microbes or extraterrestrial biohazards to or from planet Earth.”