How unusual that the study of an interstellar object should receive a boost from the United States Space Command, which is responsible for US military operations off-planet. But that’s part of the story of CNEOS 2014-01-08, which is described in its discovery paper as “a meteor of interstellar origin.” The 2019 finding came from Harvard’s Avi Loeb, working with then undergraduate student Amir Siraj. Loeb had been examining a catalog containing data on meteors over the last three decades in terms of the strength of their fireball, prompted by a 2018 fireball off the Kamchatka peninsula.

The Kamchatka meteor produced a blast with ten times the energy of the Hiroshima bomb, leading Loeb to put Siraj to work on calculating the past trajectories of the fastest meteors in the CNEOS catalog – CNEOS is NASA’s Center for Near Earth Object Studies. In an email yesterday morning, Loeb explained that numerous factors went into the study. Siraj was able to work with the position and velocity of the meteors at impact while factoring in the Earth’s gravity as well as that of the Sun and planets.

You would think that the fastest such objects would be those with interstellar implications, but it turns out that the fastest meteor in the catalog was not on a hyperbolic orbit, but had made a head-on collision with the Earth. But CNEOS 2014-01-08, which struck the Earth in 2014, impacting the ocean near the coast of Papua New Guinea, was another matter. The 2019 discovery paper (citation below) outlined the case for this object as interstellar in origin, unbound to the Sun.

A new paper is now available, submitted to the Journal of Astronomical Instrumentation. Says Loeb:

In our 2019 discovery paper, Amir and I inferred CNEOS-2014–01–08 to be moving at nearly sixty kilometers per second outside the Solar system, twice faster than the characteristic speed of stars in the so-called “Local Standard of Rest” of the Milky Way. In our new paper we took account of the meteor slowdown in the atmosphere and found that its speed was initially larger than the value measured from the fireball deep in the atmosphere by twenty kilometers per second. If the meteor was natural in origin, then this high initial speed suggests gravitational ejection from a deep potential well, such as found in the interior of a planetary system, within the orbit of a Mercury-like planet around a Sun-like star. Alternatively, the meteor could have been a technological object propelled by artificial means. 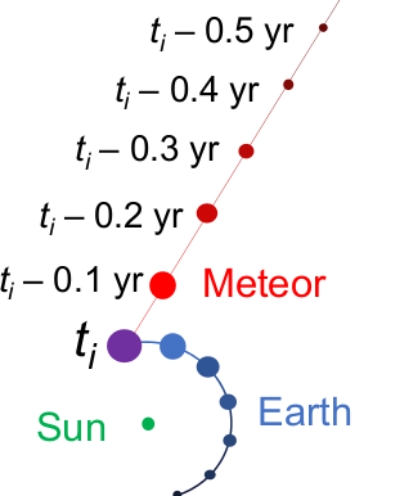 We’re able to draw some conclusions about this interstellar meteor even from the relatively sparse data available. But first, a word about the data collection process. You can imagine how wide-ranging the network of sensors that tracks objects entering the Earth’s atmosphere for reasons of national security must be. I learned from Loeb’s email that Space Command and NASA had made an agreement in 2020 that would boost NASA’s asteroid tracking capabilities through the use of Pentagon resources. Thus NASA is able to take advantage of light curve data generated by this source.

For more on these interactions, see Amir Siraj’s Spy Satellites Confirmed Our Discovery of the First Meteor from Beyond the Solar System. Because confirming the nature of CNEOS-2014–01–08 required referencing classified datasets, a letter to NASA from US Space Command came into play, issued on April 6, 2022 and making note of the 2019 paper by Loeb and Siraj. The letter confirms the interstellar nature of this object.

Loeb points out that as the meteor detection occurred in January of 2014, it predates the discovery of ‘Oumuamua by almost four years. Thus CNEOS-2014–01–08 “should be recognized as the first massive interstellar object ever discovered.”

6/ “I had the pleasure of signing a memo with @ussfspoc’s Chief Scientist, Dr. Mozer, to confirm that a previously-detected interstellar object was indeed an interstellar object, a confirmation that assisted the broader astronomical community.” pic.twitter.com/PGlIOnCSrW

We can already make some statements, as the authors do in the new paper, about the composition of this object, because the US Department of Defense released, along with its confirmation letter, the light curve for CNEOS 2014-01-08, showing three flashes separated from each other by roughly a tenth of a second. The authors note that it is possible to use the measured direction of motion for the object to calculate the altitude of these flashes as well as the density of the air at the level they occurred.

The calculations are complex and I send you to the paper for the details. But here is a taste of the logic behind them as stated within:

When a supersonic meteor moves through air, it is subject to a friction force on its frontal surface area. The force per unit area equals the ambient mass-density of air times the square of the object’s speed. This ram pressure reflects the flux of momentum per unit area per unit time delivered to the object in slowing down its motion. The meteor disintegrates if the ram pressure exceeds the yield strength of the material it is made of, representing the maximum stress that can be applied to it before it begins to deform. The heat released by the friction with air melts the fragments and generates the flashes of light in the fireball.

Loeb and Siraj calculated the ram pressure exerted on CNEOS 2014-01-08 at the time the three flashes in the light curve occurred. Here I’ll again draw from Loeb’s email:

We translated the meteor light curve to a plot of the power released as a function of the ambient ram pressure. To our surprise, the disintegration of CNEOS-2014–01–08 occurred when the external ram pressure reached a value of 113 megapascals (MPa). This value is twenty times larger than the highest yield strength of stony meteorites and two times larger than that of the toughest iron meteorites. The first interstellar meteor could not have been a stony meteorite similar to most solar system asteroids.

Indeed, as Loeb points out, the required material strength for this object has to exceed that of iron meteorites to allow it to survive the ram pressure down to the 18.7 kilometer altitude where the brightest flare shows up in the data. About one in twenty of the objects impacting the Earth are iron meteorites – 90% to 95% iron, mixing with a remainder of nickel alloys and trace amounts of iridium, gallium and sometimes gold. Loeb’s email points out how useful a sample of this object would be:

We could confirm the interstellar origin of this meteor independent of its speed based on its composition being different from solar system objects. It could deliver exotic abundances of heavy elements, depending on the proximity of its birth place to a supernova or a merger event of two neutron stars.

Confirming this with actual samples from the object would be ideal, which is why Loeb is hoping to find the funding to put what he describes as “an experienced expedition team” and the needed equipment to reach the impact site off the coast of Papua New Guinea. He has already received half a million dollars toward this purpose but needs another million to proceed with the expedition. From the paper:

The best way to decipher anomalies is to gather additional data. We are currently planning an expedition to Papua New Guinea where we could retrieve the meteor’s fragments from the ocean floor. Studying these fragments in a laboratory would allow us to determine the isotope abundances in CNEOS-2014-01-08 and check whether they are different from those found in solar system meteors. Altogether, anomalous properties of interstellar objects like CNEOS-2014-01-08 and ‘Oumuamua, hold the potential for revising conventional wisdom on our cosmic neighborhood. The expedition to the ocean floor around Papua New Guinea will illustrate metaphorically how scientific evidence expands our island of knowledge into the ocean of ignorance that surrounds it.

The search area appears to be a relatively reasonable 10 kilometers by 10 kilometers, offering the potential for discovery of fragments on the ocean floor. The plan is ambitious but seems entirely workable. I’ll close with its description in the paper:

Our plan is to mobilize a ship with a magnetic sled deployed using a long line winch. We will be operating approximately ∼ 300 km north of Manus Island. The team will consist of seven sled operators, plus the scientific team… We will tow a sled mounted with magnets, cameras and lights on the ocean floor inside of a 10 km × 10 km search box. A number of sources have been used to narrow the search site to this relatively small search box. A sled, ∼ 2 m long, ∼ 1 m wide and ∼ 0.2 m centimeters tall weighing about ∼ 55 kg, will be towed along the seabed to sample for ferro-magnetic meteorite fragments from the CNEOS 2014-01-08.

It would never have occurred to me when I began publishing Centauri Dreams that one day we might be mounting a search in our own oceans looking for debris from an interstellar object. Readers with deep pockets take note.

Previous post: Ross 508 b: What We Can Learn from a Red Dwarf Super-Earth