Laser Communications: A Step at a Time to Deep Space

My last look at laser communications inside the NASA playbook was a year ago, and for a variety of reasons it’s time to catch up with the Laser Communications Relay Demonstration (LCRD), which launched in late 2021, and the projects that will follow. LCRD has now been certified for its mission of shaking out laser systems in terms of effectiveness and potential for relay operations. Ideally, we’d like to receive data from other missions and relay to the ground in a seamless optical network. How close are we to such a result? 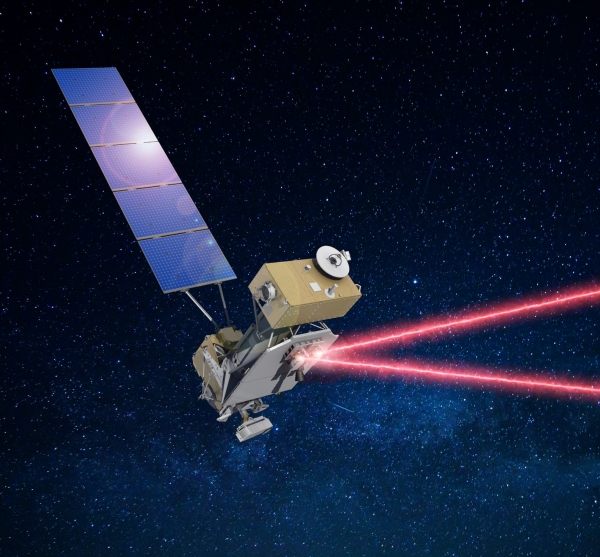 LCRD is now in geosynchronous orbit almost 36,000 kilometers above the equator, poised for its two year mission, but before we proceed, note this. The voice is that of Rick Butler, project lead for the LCRD experimenters program at NASA GSFC:

“We will start receiving some experiment results almost immediately, while others are long-term and will take time for trends to emerge during LCRD’s two-year experiment period. LCRD will answer the aerospace industry’s questions about laser communications as an operational option for high bandwidth applications.

“The program is still looking for new experiments, and anyone who is interested should reach out. We are tapping into the laser communications community and these experiments will show how optical will work for international organizations, industry, and academia.”

The Opportunities for Experiments page at GSFC offers the overview for anyone looking to join this effort with ideas for experiments to test optical communications links. Contact information for proposals is provided, and I also note that NASA intends to use LCRD to relay New Year’s resolutions submitted by the public through social media accounts as a demonstration of laser communications capabilities. Sure, it’s a bit of a stunt, but it makes optical communications visible to a general audience as we move into the era of laser networking for space missions near and far.

TeraByte InfraRed Delivery (TBIRD) is to follow, having launched on May 25 of this year. Here scientists are pushing the data downlink, going to 200 gigabits per second, which will represent the highest optical rate NASA has yet achieved. A single 7-minute pass of this CubeSat in low-Earth orbit will return terabytes of data. TBIRD, build by MIT, is integrated into the PTD-3 CubeSat as part of a technology demonstrator mission.

This is exciting stuff in its own right: The Pathfinder Technology Demonstrator program emphasizes using the same spacecraft bus and avionics platform designs across various missions, which moves toward modular spacecraft that are more efficient and easier to produce. 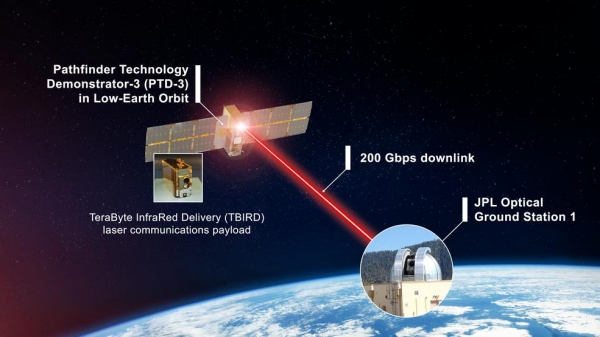 The plan for TBIRD is to demonstrate the stability of laser pointing, with the spacecraft directed toward the ground station at Table Mountain, California. Without moving parts, the laser communications testing will rely on the pointing ability of the entire spacecraft. Beth Keer (NASA GSFC) is TBIRD project manager:

“In the past, we’ve designed our instruments and spacecraft around the constraint of how much data we can get down or back from space to Earth. With optical communications, we’re blowing that out of the water as far as the amount of data we can bring back. It is truly a game-changing capability.”

I’ll also mention a component of laser testing that will go to the International Space Station in the form of ILLUMA-T, which stands for Integrated LCRD Low-Earth Orbit User Modem and Amplifier Terminal. Sending data at 1.2 gigabits per second, the device will communicate with LCRD, which will then relay data on ISS experiments and other information to ground stations at Haleakalā, Hawaii or Table Mountain. While NASA has been using communication relay satellites since 1983, the ability of LCRD to send and receive data from both missions and ground stations from its geosynchronous orbit means we will have achieved the agency’s first two-way, end-to-end optical relay. ILLUMA-T will shake out this system, demonstrating low-Earth orbit to geosynchronous orbit to ground station links in an end-to-end system.

SpaceX uses laser links to move Internet traffic from spacecraft to spacecraft in its Starlink system, and the European Space Agency does the same for its system of environmental monitoring satellites, but both of these use conventional radio to return data to Earth, and a direct link of optical data to Earth is the logical next step.

Extending further from the Earth, the Artemis II mission will carry its own Optical Communications System aboard the Orion spacecraft, making it the first crewed lunar flight demonstrating laser communications. With a downlink rate as high as 260 megabits per second, the system will be able to send high-resolution images and video.

While we wait to see when the Psyche mission will fly, I note that the Deep Space Optical Communications package is aboard, an attempt to increase communications performance by up to 100 times over conventional deep space missions. Now we take laser technologies outside the Earth-Moon system, with the Hale Telescope at Palomar receiving high-speed data from the transceiver aboard the spacecraft. The uplink will be from a laser transmitter at the JPL Table Mountain facility. This experimental effort is scheduled to begin not long after launch and will extend for at least a year and perhaps longer depending on results.

Can we look at laser communications from an interstellar perspective? Early work on this points to the potential as well as the difficulties. According to one JPL study, it would take an installation the size of the Hubble Space Telescope, beaming a 20-watt laser signal, to reach us from Alpha Centauri, so we have a long way to go before we can contemplate such methods between stars.

We can work wonders up to a point: The Deep Space Network can pick up Voyager’s 23-watt radio signal even though it is billions of times weaker than the power it would take to operate a digital wristwatch. But going interstellar will require moving to lasers to narrow beam diffraction (the Voyager signal is now over 1000 times Earth’s diameter). We know how to communicate if we can put the equipment where we need it, but getting payloads of any size – even a microchip – to another star continues to challenge our best scientists.

Exploring that gravitational lens communications relay described by Claudio Maccone may be one way around the problem. We already have a mission under study at JPL to reach 550 AU and beyond with the express purpose of imaging a planet around a nearby star. One step at a time, then, both for exoplanet observation using the Sun’s gravitational lens and, in some latter mission, possibly exploiting its magnification for communications. And one step at a time for lasers. Let’s get Psyche launched and see what DSOC can do.