A New Trio of ‘Twilight’ Asteroids

I have further thoughts on ‘Stapledon thinking,’ as discussed in the last post, but my second piece on the topic isn’t ready just yet, and in any case I want to give a quick nod to a topic we looked at a few months back, the discovery and analysis of Near Earth Objects that orbit between the Sun and the orbit of Earth. So far we haven’t found many of these ‘twilight objects,’ but the attempts to find them continue.

As witness current work with an exceptional instrument. The Dark Energy Camera is a wide-field CCD imager, mounted on a 4-meter telescope at Cerro Tololo (Chile), that was designed for the Dark Energy Survey. The latter mapped hundreds of millions of galaxies to look for insights into the structure of the cosmos. The DES ended in 2019, but DECam continues to produce data that have helped us find fascinating objects like 2015 TG387, a dwarf planet on an extreme orbit that takes it to aphelion at 1000 AU, with a closest solar approach of 65 AU. DECam has also found 12 new moons of Jupiter and a number of ‘stellar streams’ produced when small galaxies interact with the Milky Way. Now we learn that it has flagged three Near Earth Objects on inner system orbits.

These NEOs stand out beyond the fact that they are part of that small population of asteroids found inside the orbits of Earth and Venus. One of them, the 1.5-kilometer-wide 2022 AP7, merits more than a passing glance, as there is a faint chance it could one day intersect with Earth’s orbit. That would be problematic because the size of this asteroid takes it into the category that Scott S. Sheppard (Carnegie Institution for Science) calls ‘planet killers.’ 2022 AP7 is the second asteroid of this size found in the ongoing survey. Another, designated 2021 PH27, is the closest known asteroid to the Sun, and has the largest effects from general relativity in the system.

So should we worry about the 1.5-kilometer 2022 AP7? Only in the sense that we should keep an eye on it. Unfortunately, its designation as a Potentially Hazardous Asteroid (PHA) is going to generate scare stories, so let’s untangle the definition of a PHA.

What we know about 2022 AP7 is that it crosses Earth’s orbit with a perihelion near 0.83 AU and an aphelion near the orbit of Jupiter. Asteroids that cross Earth’s orbit are known as Apollos, and this one is the largest asteroid designated as a PHA that has been found in the last eight years. According to the paper on these observations, the Minimum Orbit Intersection Distance (MOID) with Earth is 0.0475 AU. That’s close enough to declare it a PHA, which basically tells us that this is an object that merits continued observation rather than one posing imminent danger.

The Center for Near Earth Object Studies, which computes asteroid and comet orbits, defines a Potentially Hazardous Asteroid this way:

Potentially Hazardous Asteroids (PHAs) are currently defined based on parameters that measure the asteroid’s potential to make threatening close approaches to the Earth. Specifically, all asteroids with a minimum orbit intersection distance (MOID) of 0.05 au or less and an absolute magnitude (H) of 22.0 or less are considered PHAs.

So asteroids that fail to approach closer to the Earth than 0.05 au (this works out to about 7,480,000 km) – or are smaller than 140 meters in diameter – do not fit the definition of PHAs. The concern is that over timespans of hundreds of years or more, such an object’s orbit may take it closer still to Earth, making identification of PHAs a necessary part of our planetary defense. Much can happen over extended periods of time to nudge the orbit of an NEO. Consider another PHA, the now well-known and visited Bennu, studied up close by the OSIRIS-REx mission.

CNEOS predicts that the next time Bennu will pass Earth within the Moon’s orbit will be in 2135. This particularly close approach will change Bennu’s orbit by a small amount, which is uncertain at this time and which may lead to a potential impact on Earth sometime between 2175 and 2199. CNEOS has calculated that the cumulative risk of impact by Bennu during this 24-year period is 0.037 percent or a 1 in 2,700 chance. That means there is a 99.963 percent probability that Bennu will not impact Earth during this quarter-century period.

Note that “1 in 2,700” statement. CNEOS has been clear that this is not an impact probability for a single year, but the cumulative probability of impact over all years between 2175 and 2199. The risk of an impact in 2175, for example, is listed as 1 in 24,000. And the figures adjust as observations accumulate. A close approach to the Moon and Earth will itself tweak Bennu’s orbit by an amount that we can only estimate. Thus new data are constantly sought to tighten the window of uncertainty. One of the many good reasons for the OSIRIS-REx mission was to do just this as we revise the future possibilities for an impact. Remember, we’re looking a century out.

I feel comfortable with this arrangement. We’re doing an excellent job of identifying NEOs, we’re learning about asteroids through observation and sample return missions, and we’re investigating means of altering the trajectories of any objects that one day may threaten us. Which is to say I’m not losing any sleep about NEOs, as long as this level of vigilance and investigation continues, as it surely must in the name of planetary defense. 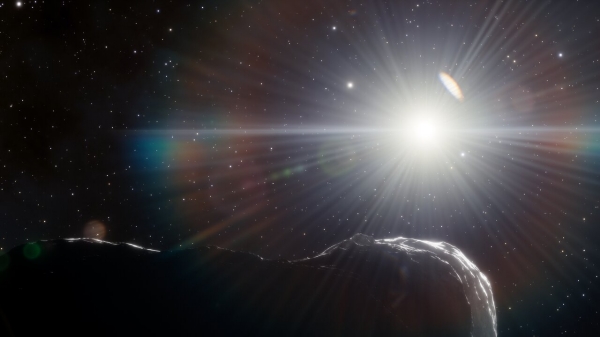 Image: Artist’s impression of an asteroid that orbits closer to the Sun than Earth’s orbit. Credit: NSF NOIRLab.

The aforementioned Scott Sheppard is lead author of the paper on the three new NEAs. He, notes that the survey has found one other PHA thus far:

“Our twilight survey is scouring the area within the orbits of Earth and Venus for asteroids. So far we have found two large near-Earth asteroids that are about 1 kilometer across, a size that we call planet killers. There are likely only a few NEAs with similar sizes left to find, and these large undiscovered asteroids likely have orbits that keep them interior to the orbits of Earth and Venus most of the time. Only about 25 asteroids with orbits completely within Earth’s orbit have been discovered to date because of the difficulty of observing near the glare of the Sun.”

There are likely several more 1 km sized Atira-type asteroids left to find, which probably have low semimajor axes and high inclinations, like 2021 PH27, making them hard to find for most asteroid surveys. The DECam twilight survey is covering sky geometries and areas that most other surveys do not cover to depths not usually obtained, filling an important niche in the survey for the last few remaining relatively large unknown NEOs.

Noteworthy is the apparent lack of smaller asteroids in the survey:

Next post: In Person or Proxy to Mars and Beyond?