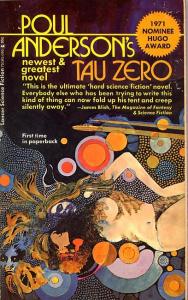 On the left is the cover of the first paperback edition of Poul Anderson’s Tau Zero, published in 1970 (a shorter version called “To Outlive Eternity” appeared in 1967 in Galaxy Science Fiction, though unseen by me, as I was getting ready to leave for college). The first hardcover edition is below.

Many of the scientists I talked to in doing the research for Centauri Dreams told me they read science fiction, and most favored the ‘hard’ SF, scrupulously accurate to science as understood at the time, favored by writers like Anderson. And several said that it had been Tau Zero that got them into physics or engineering in the first place.

Here’s Anderson’s look at a Bussard ramjet as it consumes interstellar hydrogen on a runaway journey that will never end:

The ship was not small. Yet she was the barest glint of metal in that vast web of forces which surrounded her. She herself no longer generated them. She had initiated the process when she attained minimum ramjet speed; but it became too huge, too swift, until it could only be created and sustained by itself . . . Starlike burned the hydrogen fusion, aft of the Bussard module that focused the electromagnetism which contained it. A titanic gas-laser effect aimed photons themselves in a beam whose reaction pushed the ship forward—and which would have vaporized any solid body it struck. The process was not 100 per cent efficient. But most of the stray energy went to ionize the hydrogen which escaped nuclear combustion. These protons and electrons, together with the fusion products, were also hurled backward by the force fields, a gale of plasma adding its own increment of momentum . . . The process was not steady. Rather, it shared the instability of living metabolism and danced always on the same edge of disaster… 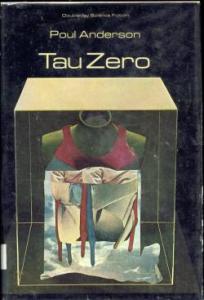 The Bussard ramjet is today considered unworkable, producing more drag that the thrust it might generate. But the idea of absorbing your fuel from the medium through which you fly is so provocative that if there is any way to save this concept, we will certainly try to find it. If not, the ramjet has still led to productive ideas like the magsail that grew out of Dana Andrews’ and Robert Zubrin’s work.

Recommended reading (in addition to Tau Zero itself):