An extrasolar planet the size of Neptune is news, and when that planet is in an orbit roughly analagous to Neptune’s in our own solar system, researchers take special note. After all, almost all the planets we’ve discovered around other stars are huge gas giants orbiting extremely close to their parent stars.

And this extrasolar planet is more anomalous still. It was back in May that a team from the University of Rochester led by Drs. Dan Watson and William Forrest, using NASA’s Spitzer Space Telescope, discovered a gap in the dust around the star CoKu Tau 4, one of five young stars they surveyed in the constellation Taurus.

The central part of the dust disk around the star was missing, a ‘hole’ that can only be explained by the presence of a planet, and a young one, at that. In fact, this planet is assumed to be between 100,000 to half a million years old, a toddler by any astronomer’s definition. CoKu Tau 4 is itself about one million years old; by contrast, Earth is approximately 4.5-billion years old. 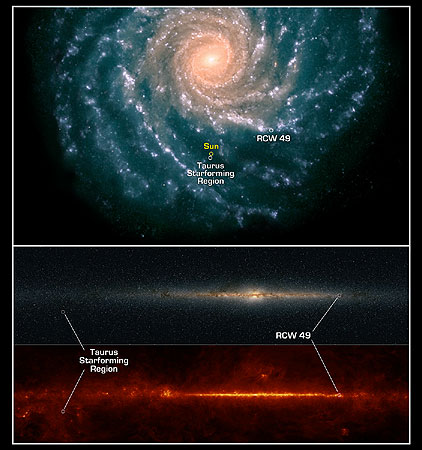 Image: The relative locations of the RCW 49 and Taurus star-forming regions. Also surveyed by the Spitzer telescope, RCW 49 is approximately 13,700 light-years from Earth in the constellation Centaurus. The top panel shows an artist’s concept of our own Milky Way Galaxy as seen from above, with the relative locations of the Sun, the nearby Taurus region, and the more distant RCW 49 nebula. In the bottom panel, these regions are marked in the sky as seen from Earth in nearly opposite directions. The top half shows the stars of the Milky Way, and the bottom half shows the far infrared view of the dust clouds in the Milky Way. Credit: ESO (top), 2MASS (middle), IRAS/DIRBE (bottom).

Now a new team of Rochester planetary theorists has verified the CoKu Tau 4 findings. And that means that a problem persists: our current models show that planets form by accretion of dust into granules and thence into the rocks that form into asteroids and planets. But this method should require at least ten million years for the process to complete.

The other theory of planetary formation is gravitational instability, where a huge cloud of gas is pulled together quickly by its own gravity. This method could create a young planet, but would require one much larger than was detected. As the team reported at the AAS Division for Planetary Sciences meeting today, “…we find that only if the planet mass is larger than about 10 Jupiter masses, allowing for a high enough surface density without inducing migration, would formation by direct gravitational instability be possible.”

A press release from the University of Rochester quotes Adam Frank, professor of physics and astronomy on the recent work:

“Even though it doesn’t fit either model, we’ve crunched the numbers and shown that yes, in fact, that hole in that dust disk could have been formed by a planet,” says Frank. “Now we have to look at our models and figure out how that planet got there. At the end of it all, we hope we have a new model, and a new understanding of how planets come to be.”

More information on the original Rochester findings can be found on this Spitzer Web page. The DPS presentation was “On the Planet and the Disk of CoKuTau/4,” (A. C. Quillen, E. B. Blackman, A. Frank, P. Varniere), with precis available here.