Although it originally ran in the January, 1944 issue of Astounding, I first ran into A.E. Van Vogt’s “Far Centaurus” in a collection of short stories called Destination: Universe (New York: Signet Books, 1952). It would be hard today to re-create the power of the story’s opening, so imbued have we become with reality-stretching concepts, but “Far Centaurus” remains the ultimate illustration of the starship paradox: why send a slow ship when a faster one will surely be built that will one day overtake it? 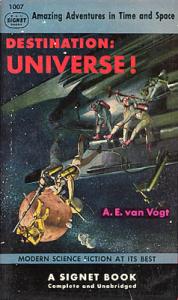 Van Vogt’s crew arrives in Alpha Centauri space only to find that there is an inhabited planetary system waiting for them, one settled long after their departure from Earth by the much faster ships that were built later. The dialogue is a bit bumpy and the science occasionally awry (van Vogt seems to think there are four, rather than three Centauri stars, for example), but the story has retained its power to this day.

Image: The first paperback edition of Destination: Universe. Although “Far Centaurus” leads off the collection, the book is filled with other worthwhile stories, most of them from Astounding. They include “The Enchanted Village,” “A Can of Paint,” “The Monster” and “Dormant.” The cover of this 1952 edition was by Stanley Meltztoff.

I remember talking to Gregory Matloff, author of the indispensable The Starflight Handbook (New York: John Wiley & Sons, 1989), about “Far Centaurus” when we met at Marshall Space Flight Center. Calling it a ‘terrific story,’ Matloff discussed it in terms of Robert Forward’s thinking:

“Bob had a couple of concepts of technological advancement,” Matloff said. “He had a famous plot of the velocity of human beings versus time. And he said if this is true, and you launch a thousand-year ship today, in a century somebody could fly the same mission in a hundred years. Theyre going to be passed and will probably have to go through customs when they get to Alpha Centauri A-2.”

The fascinating question becomes, just when do you launch? A 1,000-year ‘ark’ mission, a so-called ‘generation ship,’ would have to move at 260 AU per year to make the crossing, and according to Matloff, is forseeable using sail technologies and materials that are being developed now. Would we launch such a mission, or would we demand a different standard, such as a mission that could be completed in a single human lifetime? And the suspicion arises that both types of mission might be tried, the “Far Centaurus” paradox notwithstanding.

I’m reminded of what NASA sail expert Sandy Montgomery said about manned missions at the same meeting at MSFC: “The whole human race won’t go; some subgroup will. I think of the 14-year old boys that signed on as cabin boys in the clipper ships. They had to go from New York to San Francisco, around Cape Horn and then back; it took years and years. They left everything that was their life behind, and as they sailed they became adults. They spent most of their lives on that trip, and gave up everything that this crew would have to. So this is not a new issue. It’s a problem some people have already faced into.”

The broader question remains: how do we as a culture view multi-generational projects, and do we have the will and capability to build for futures we ourselves will never see? The question is hardly idle in a time that seems paralyzed by short-term thinking, and the answer may determine our legacy.