Nearby Planetoids from Another Star?

We’ve discussed Kuiper Belt Objects before in these pages, especially as regards the current controversy over their size. But one thing we do know: some of them are in extremely odd orbits. Take Sedna, the trans-Plutonian planetoid discovered in 2003. Its orbit is long and extremely elliptical, a 10,000-year rotation whose closest point is still 70 AU from the Sun (Neptune, by contrast, is roughly 30 AU out). 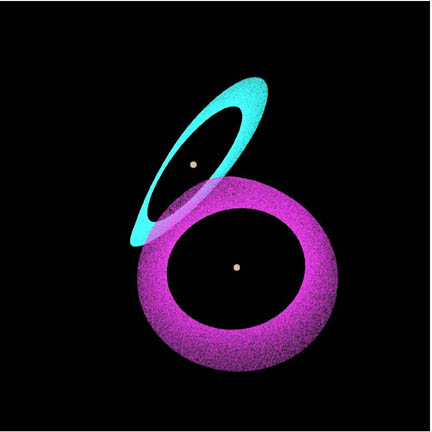 What creates an orbit like this? In the opinion of astronomer Scott Kenyon, of the Smithsonian Astrophysical Observatory, it may have been a stray star that came close to our Solar System some four billion years ago. The gravity of the Sun drew some objects orbiting the passing star away from it, just as some elements of our own Solar System likely passed to the star. Sedna’s odd orbit may be evidence of the encounter.

Image: Our sun and a passing star may have exchanged small planets and dust as they flew by each other. In the first stage shown in this image of a computer simulation, dust and planets orbit in circular disks in each of the two solar systems. (Credit: University of Utah and Smithsonian Astrophysical Observatory) 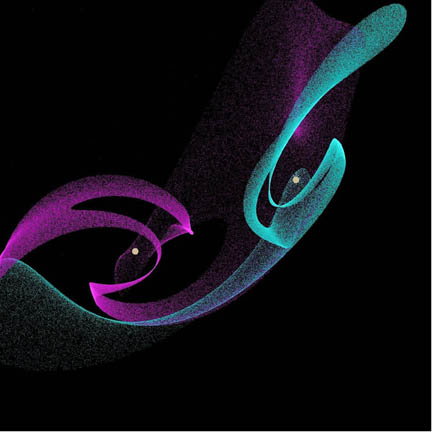 Kenyon and Benjamin Bromley (University of Utah) will publish their findings in the December 2 issue of Nature. Calculating an orbit like this is tricky; clearly the passing star didn’t come close enough to disturb the nearly circular orbit of Neptune. The astronomers figure that a flyby distance of 150 to 200 AU could disrupt the outer edges of the Kuiper Belt without disturbing the inner Solar System. They believe this event occurred before the Sun was 200 million years old. Their theory would explain what seems to be the well-defined outer edge of the Kuiper Belt, where few objects are found beyond 50 AU.

Image: As the sun and passing star approach each other, gravity can yank small objects from one solar system to the other, as shown in this computer image. (Credit: University of Utah and Smithsonian Astrophysical Observatory)

For a close encounter like this to take place, the Sun would probably have needed to have been born in a dense star cluster, just as some recent evidence has suggested it was. This would set up the close passage. From a press release from the Harvard-Smithsonian Center for Astrophysics :

“We believe that 90 percent of all stars form in clusters with a few hundred to a few thousand members,” says astronomer Charles Lada (Harvard-Smithsonian Center for Astrophysics). “The denser the cluster, the more likely the chance for an encounter between member stars.” 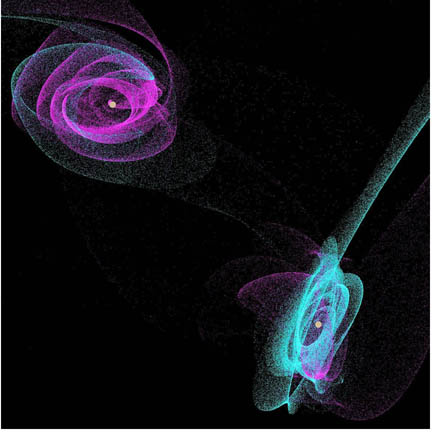 Kenyon and Bromley believe Sedna was probably not captured itself, but its orbit was sufficiently disturbed to serve as evidence of the stellar near-miss. The two consider a Kuiper Belt Object called 2000 CR105 as the best candidate for a captured object, due to its highly elliptical and inclined orbit. But they say that only the detection of objects with orbits inclined 40 degrees or more from the plane of the ecliptic will prove the existence of ‘alien’ planetoids.

Image: Once the stellar encounter is complete, the disk of each solar system contains a mixture of indigenous and captured dust and planets, as shown in the final computer image. (Credit: University of Utah and Smithsonian Astrophysical Observatory)