Remembering “Out Around Rigel”

Every technology appears in a context, meaning there is a cultural dimension to our creations that will shape and, in turn, be shaped by them. Centauri Dreams occasionally looks at stories, novels and films that have shaped our idea of interstellar flight. Today it’s “Out Around Rigel,” by Robert H. Wilson, which ran in the December, 1931 issue of Astounding Stories. To my knowledge, Wilson published only one science fiction story, but in its day it was a bombshell. 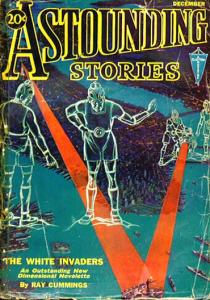 Wilson’s tale is simple enough: two adventurers named Garth and Dunal set out from their home on a terraformed Moon of the future to travel to the star Rigel. Garth’s ship is the ultimate in new tech; he boasts that with it, they can “…go in a year to the end of the universe. But, for a starter, how about a thousand light-years around Rigel in six months?” Taking the bait, a skeptical Dunal goes onboard even as he questions Garth’s science, pointing out that Einsteinian relativity makes it clear nothing can go faster than light.

Wilson may not have understood relativity all that much better than his character Garth, but he knew enough to realize the implications of traveling at near-light speed on his crew. They make the journey to Rigel, experience time dilation without realizing what is happening, and after a series of adventures, Dunal gets back to Earth only to find that a thousand years have passed. In this passage, Dunal figures out what happened:

In our argument as to the possible speed of the Comet, Garth and I had both been right. In our reference frame, the vessel had put on an incredible velocity, and covered the nine-hundred-odd light-years around Rigel in six months. But from the viewpoint of the Moon, it had been unable to attain a velocity greater than that of light. As the accelerating energy pressed the vessel’s speed closer and closer toward that limiting velocity, the mass of the ship and of its contents had increased toward infinity. And trying to move laboriously with such vast mass, our clocks and bodies had been slowed down until to our leaden minds a year of moon time became equivalent to several hours.

It’s creaky stuff today and much of the science is wrong. A modern reader guesses instantly what is going to happen. But in its day, “Out Around Rigel” was electrifying, giving readers of the time a glimpse of how Einstein had re-written our view of the universe. By 1967, when Poul Anderson wrote about a universe-spanning journey in “To Outlive Eternity” (this would become the novel Tau Zero), he knew his readers had long ago absorbed the basic idea of time dilation. Anderson was able to use it to his advantage as he propelled an out of control Bussard ramjet so close to light speed that its crew went through entire galaxies in a time they perceived as mere seconds.

Ask any space scientist with a science fiction interest whether he or she remembers Tau Zero and you’ll get a quick smile of recognition, so pervasive has its influence become. To an earlier generation, “Out Around Rigel” served much the same function, just as science fiction in general has helped to inspire fascination with the cosmos and has nurtured some of today’s most creative scientists. The story has been reprinted twice; the more accessible volume is Damon Knight’s Science Fiction of the 30’s (New York: Bobbs-Merril, 1975).