Our first interstellar mission won’t be a long jump to Alpha Centauri or Barnard’s Star. In fact, we’ve already launched not one but several interstellar missions — the two Pioneer probes, and the two Voyagers that followed them, will all exit the Solar System; i.e., they will eventually cross the boundaries of the heliosphere to emerge into pure interstellar space. Some scientists believe that Voyager 1 is already pushing up against the so-called ‘termination shock,’ where the speed of the solar wind of gas and charged particles from the Sun drops to subsonic levels.

But we need far more information than the Voyagers, with their rapidly fading signals, can tell us. The next mission designed to explore the outer limits of the Sun’s influence will be the Interstellar Boundary Explorer (IBEX). Under development at Southwest Research Institute, IBEX is designed to explore how the solar wind interacts with the interstellar medium through which our entire Solar System moves. IBEX won’t be going to the outer Solar System itself. Instead, it will consist of a pair of neutral atom imagers that will be launched into an Earth orbit by a Pegasus rocket dropped from an airplane. The mission was selected by NASA as part of the agency’s Small Explorer program on January 26 of this year.

“In addition to revealing many of the interstellar boundary’s unknown properties, IBEX will explore how the solar wind regulates the radiation from the galaxy,” says Dr. David J. McComas, senior executive director of the SwRI Space Science and Engineering Division. “This radiation poses a major hazard to human space exploration and may have affected the formation and evolution of life on Earth. By examining the underlying physics of our solar system’s outer boundaries, IBEX will allow us to extrapolate the present day conditions to those of the past and the future, and offer insight into similar boundaries that surround other stars and stellar systems.” 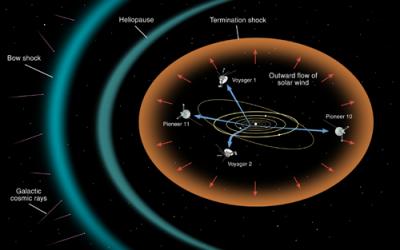 Image: The heliosphere is a bubble in space produced by the solar wind. Although electrically neutral atoms from interstellar space can penetrate this bubble, virtually all the material in the heliosphere emanates from the Sun itself. The solar wind streams off of the Sun in all directions at speeds of several hundred kilometers per second (about 1,000,000 mph in the Earth’s vicinity). At some distance from the Sun, well beyond the orbit of Pluto, this supersonic wind must slow down to meet the gases in the interstellar medium. It must first pass through a shock, the termination shock, to become subsonic. It then slows down and gets turned in the direction of the ambient flow of the interstellar medium to form a comet-like tail behind the Sun. This subsonic flow region is called the heliosheath. The outer surface of the heliosheath, where the heliosphere meets the interstellar medium, is called the heliopause. Credit: Lunar and Planetary Institute

IBEX will be able to make its observations by traveling in a highly elliptical, high-altitude orbit outside the Earth’s magnetosphere. Its large aperture, single-pixel cameras will look perpendicular to the Earth’s spin axis, generating global maps by using the motion of the spacecraft. If all goes well, IBEX should be the first spacecraft to detect the outer edge of the Solar System. The mission is to be launched in 2008.

You can read more about IBEX at SwRI’s Interstellar Boundary Explorer page. A NASA news release on the mission can be found here.