January 11 to February 14, 2006 marks the launch window for NASA’s New Horizons mission to Pluto and the Kuiper Belt. At the moment, New Horizons is in pieces, or as principal investigator Alan Stern puts it in an update on the mission, it’s in “…boards, boxes and a spacecraft bus on the cleanroom floor at the Johns Hopkins Applied Physics Laboratory…” The high-gain antenna is being checked, and the main computer system installed. According to Stern:

The bird also received a guidance, navigation and control software load, and the first testing of the autonomy system (that provides for fault protection) has taken place. Coming soon to the spacecraft are the redundant flight computer, the gyros and the Ralph remote-sensing package.

We are now approaching the time – only weeks away – when the last avionics box goes on the spacecraft and New Horizons is dressed in thermal blankets for environmental testing in a large vacuum chamber at NASA Goddard Space Flight Center.

New Horizons would complete our survey of the planets by conducting a flyby study of Pluto and its moon Charon in 2015 before pushing on into the Kuiper Belt. There are those who consider Pluto simply the largest Kuiper Belt object and not a planet at all, but in any case, the exploration of the small, icy worlds beyond Pluto’s orbit is becoming a priority for our understanding of how the Solar System formed. As for Pluto, even the best Hubble view cannot bring us more than a hint of surface features on its enigmatic surface. 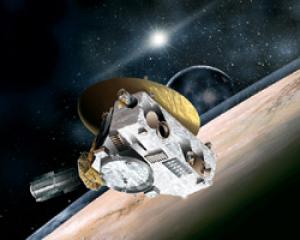 Image: Artist’s concept of the New Horizons spacecraft during its planned encounter with Pluto and its moon, Charon. The craft’s miniature cameras, radio science experiment, ultraviolet and infrared spectrometers and space plasma experiments would characterize the global geology and geomorphology of Pluto and Charon, map their surface compositions and temperatures, and examine Pluto’s atmosphere in detail. The spacecraft’s most prominent design feature is a nearly 8-foot (2.1-meter) dish antenna, through which it would communicate with Earth from as far as 4.7 billion miles (7.5 billion kilometers) away.

After launch by an Atlas V modified with a Boeing-built extra stage, New Horizons will slingshot past Jupiter, a gravity assist that will knock five years off the time needed to reach Pluto. Power will come from a radioisotope thermoelectric generator (RTG) that creates electricity from the decay of its radioactive fuel. And it’s the RTG — and public reaction to it — that we’re waiting on. A Draft Environmental Impact Statement for the New Horizons mission has been released for a 45-day public comment period that ends April 11. NASA will host meetings at the Florida Solar Energy Center in Cocoa, followed by reviews that will decide (in the fall) whether or not New Horizons flies.