The Light of Distant Worlds

As discussed in yesterday’s entry, being able to work with actual light from distant planets is a major breakthrough. It opens the possibility of studying characteristics like temperature and atmospheric composition, further fusing astronomy with the nascent science of astrobiology. And with the Spitzer Space Telescope’s proven ability to make such observations, we can expect a whirlwind of exoplanetary data ahead.

A study of the work on HD 209458b, a ‘hot Jupiter’ that orbits its parent star in 3.5 days, ran in today’s online edition of Nature. The paper is Deming, D., Seager, S. et al., “Infrared radiation from an extrasolar planet.” Dr. Sara Seager of the Carnegie Institution, a co-author of the study, provided more about HD 209458b:

“This planet was discovered indirectly in 1999 and was later found to transit its star–the star dims as the planet moves in front of it during the course of the planet’s orbit. With Spitzer, we first measured the combined light of the planet and star just before the planet went out of sight. Then when the planet was out of view, we measured how much energy the star emitted on its own. The difference between those readings told us how much the planet emitted.” 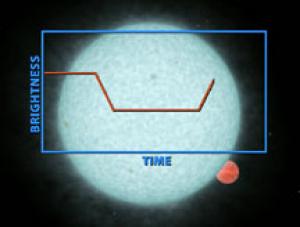 Image: Frame from a video simulation shows in a simplified schematic how the brightness of a star/planet system varies as the planet is eclipsed by the star. The false colors represent infrared images. Credit: NASA/JPL/Caltech-R. Hurt.

The paper on TrES-1 by David Charbonneau et al. is in press at The Astrophysical Journal, with publication slated for the June 20 issue. A preprint of the paper, “Detection of Thermal Emission from an Extrasolar Planet,” is available at the ArXiv site.

Also intriguing on the exoplanet front is planet-hunter Geoff Marcy’s intention to issue a catalog that will cover all exoplanets found to date. Marcy’s own team has thus far found almost 100 planets, and he is now turning to The Planetary Society in search of donations for the catalog.

Why is a catalog necessary? Here’s what The Planetary Society has to say in a recent release:

…most of the data is not available to the scientific community, or to the public at large. Of course, preliminary information about each world was published as it was discovered. But scientists have continued to study them, adding mountains of data to those initial observations.

So, while a massive reservoir of fantastic information about these new worlds now exists… almost no one can tap into it because the new data has never been properly processed and released. There could be critical discoveries buried in those mounds of data that have never seen the light of day.

Centauri Dreams agrees that such an updatable resource would be of scientific importance as well as providing broad educational options for students and teachers.