Looking for Life Around Red Giants

Should we narrow the search for life-bearing planets to Sun-like stars? The answer may be ‘no’ if we take age into account, according to a new study from an international team of astronomers. Stars well into their red-giant phase may have actually revived outer, icy planets to offer them a chance at developing living ecosystems of their own. This happens because stars become brighter as they get older, pushing their habitable zones deeper into any planetary system they possess.

The study considered the aging process of stars having the same mass as the Sun, and also considered stars with 1.5 and 2 times its mass. “Our result indicates that searches for life-giving worlds outside our solar system should include planets around old stars,” said Dr. Bruno Lopez of the Observatoire de la Cote d’Azur, Nice, France. Lopez is lead author of a paper on this research that is to appear in The Astrophysical Journal. 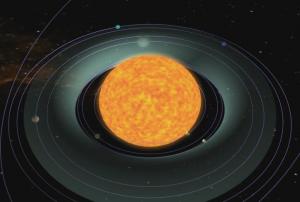 That puts more than 150 red giants within 100 light years on a list of possible targets for study by missions like Terrestrial Planet Finder, which will search for life signatures in the atmospheres of exoplanets. And it extends in interesting ways our recent discussion of the Circumstellar Habitable Zone (CHZ) within which life is able to form. That zone has usually been defined as the area within which water can exist as a liquid. The new research shows how flexible the habitable zone concept can be as the host star changes.

Image: A sun-like star grows into its red giant phase, increasing in size and luminosity. Energy in the form of heat can now reach a once-frozen and dead moon. The icy surface quickly melts into liquid water, filling in old craters with warmer seas. The stage is now set for the possible formation of new life. Credit: NASA.

In order for life to form on worlds around red giants, a lengthy period of stability is required. The earliest fossils on Earth are some 3.5 billion years old, although life probably evolved earlier, its traces obscured by the planet’s changing geology. But assume one-half to one billion years for the emergence of life and the numbers look promising. Planets between 2 and 9 AU from a solar-mass star may have a window of up to two billion years for life to emerge as their sun’s habitable zone grows.

“The temporal transit of the habitable zone does not appear incompatible with the possible duration for the development of life,” said co-author Dr. Jean Schneider of the Observatoire de Paris, France. And Dr. William Danchi of NASA’s Goddard Space Flight Center, a co-author of the paper, speculated that microbes from inner worlds might make their way to outer planets in such a system, allowing life to take hold even when the red giant phase proved too swift for its normal development.

More on these speculations can be found at this GSFC page, which also contains interesting animations of changing habitable zones. The paper in question is Lopez, Schneider and Danchi, “Can Life develop in the expanded habitable zones around Red Giant Stars?” available in preprint form at the ArXiv site.