The recent image of a possible planet around the star GQ Lupi has met with understandable enthusiasm in the press, but we still don’t know whether the small object just to the right of the star in the image below is a planet or a brown dwarf. The boundary between brown dwarf and planet is tricky terrain, but the European Southern Observatory fixes it at roughly 13 Jupiter masses, which is the critical mass needed to ignite deuterium. Brown dwarfs, then, are objects heavier than that. 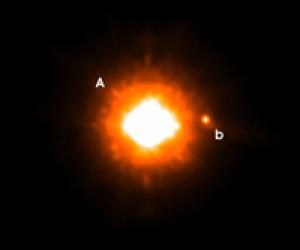 But the observations of Ralph Neuhäuser and colleagues do not provide a direct estimate of the smaller object’s mass. Because GQ Lupi and its companion presumably formed at the same time, then the new object is young, and traditional models for such calculations may not apply. But using them, according to a press release from the ESO, implies that the object is somewhere between 3 and 42 Jupiter masses. In other words, based on what we can determine so far, GQ Lupi b is either a planet or a brown dwarf.

Image: The photo above shows the VLT NACO image, taken in the Ks-band, of GQ Lupi. The feeble point of light to the right of the star is the newly found cold companion. It is 250 times fainter than the star itself and it located 0.73 arcsecond west. At the distance of GQ Lupi, this corresponds to a distance of roughly 100 astronomical units. North is up and East is to the left. Credit: European Southern Observatory.

From the press release:

These early phases in brown dwarf and planet formation are essentially unknown territory for models. It is very difficult to model the early collapse of the gas clouds given the conditions around the forming parent star. One set of models, specifically tailored to model the very young objects, provide masses as low as one to two Jupiter-masses. But as Ralph Neuhäuser points out “these new models still need to be calibrated, before the mass of such companions can be determined confidently”.

The astronomers also stress that from the comparison between their VLT/NACO spectra and the theoretical models of co-author Peter Hauschildt from Hamburg University (Germany), they arrive at the conclusion that the best fit is obtained for an object having roughly 2 Jupiter radii and 2 Jupiter masses. If this result holds, GQ Lupi b would thus be the youngest and lightest exoplanet to have been imaged.

The only way to sort this out is through further observations. Meanwhile, you can read an unedited version of the Neuhäuser paper “Evidence for a co-moving sub-stellar companion of GQ Lupi” here (PDF warning). The paper has already been accepted for publication in Astronomy and Astrophysics.