Voyager and the Benefits of ‘Slow Science’

The Washington Post takes note of the possible suspension of funding for the two Voyager spacecraft in a story by Rick Weiss called Our Incredible Shrinking Curiosity. As discussed here in a previous entry, NASA is eying the Voyager budget of $4.2 million per year as it ponders cutbacks. Such news, says Weiss, leaves him “…depressingly convinced that these 8 billion-mile-long extensions of human curiosity are indeed now smarter, or at least more enlightened, than the mortals who made them.”

In Weiss’ view, “…the U.S. scientific enterprise is riddled with evidence that Americans have lost sight of the value of non-applied, curiosity-driven research — the open-ended sort of exploration that doesn’t know exactly where it’s going but so often leads to big payoffs.”

But is it a lack of curiosity that motivates such cuts, or something more temporal? Isn’t the real culprit our inability to think in the longer time frames required of what Stewart Brand calls ‘slow science’? The Voyagers have been on their journey since 1977, and probably have fifteen years or so of useful science left in them. But assuming they last until 2020, we’re talking a 43-year mission, one that has been in some cases handed off to a new generation of scientists, passed along like an heirloom out of the past. Slow science glories in such projects, but we live in a bottom-line culture that has trouble seeing beyond the next quarterly return, much less into the next century. 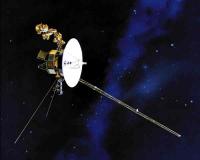 Centauri Dreams would argue that this applies to the other examples Weiss discusses of projects threatened with extinction. Geologists who received Congressional authorization to deploy thousands of sensors to learn more about tectonic forces have found only a fraction of the money appropriated, and a mere 62 of the planned 7000 sensors have been deployed. Meanwhile, the Department of Energy is ending the BTeV project at Fermilab, jeopardizing our chances of finding the so-called ‘supersymmetric’ particle. The demand for immediate results in terms of products and profits makes it all to easy to cut back on projects that might take decades to bear fruit.

Here’s what Brand has to say about slow science in his book The Clock of the Long Now (New York: Basic Books, 1999):

Enormous, inexorable power is in the long trends, but we cannot measure them or even notice them without doing extremely patient science. These days science is more often driven at commercial or even fashion velocity than at the deliberate pace of governance or the even slower pace of nature. As history accelerates, people become fast learners, and that’s good, but it is also a problem. ‘Fast learners tend to track noisy signals too closely and to confuse themselves by making changes before the effects of previous actions are clear,’ says decision analyst James Marsh. Quiz shows and classroom teachers reward the quick answerer. This is not helpful in domains where the quick answer is the wrong answer.

A case in point: a nine-year study in Africa concluded that burning new woody growth in open grassland could not prevent the woods from taking over. A forty-year study of the same issue proved the opposite; researchers learned that it simply takes more than ten years of annual fires to keep woody rootstocks from resprouting.

How much might we learn about the heliosphere and the interstellar medium beyond by studying the data the two Voyagers will still be returning for another fifteen years? Raising the alarm on this issue impacts more than two spacecraft. It affects the way we do science itself, our motivations for the pursuit, our appreciation for the challenges the universe presents us. To go beyond the futility of the daily quick fix requires recapturing the sense of science as legacy, a priceless gift to be passed along to those who come after us.

Next post: Extremely Large Telescopes and the Hunt for Terrestrial Worlds