Beamed propulsion is the classic solution to the mass ratio problem in interstellar flight. Rather than pushing more and more fuel to get your payload to another star system, you leave the fuel behind. Robert Forward’s vast lightsail proposals come immediately to mind, but in 2001 physicist Geoffrey Landis proposed propulsion by particle beam, with energy delivered from the Solar System to the departing spacecraft.

The notion is this: a charged particle beam is accelerated and focused, then neutralized in charge to prevent the beam from expanding as it travels due to electrostatic repulsion. When the particles reach their target, they are re-ionized and reflected by a magnetic sail, which Landis originally conceived as ‘a large superconducing loop with a diameter of many tens of kilometers.’

The particle-beam idea seems to solve two problems with lightsails: First, a light beam provides a relatively inefficient energy source, demanding huge power facilities and thus driving up the cost. Some of Forward’s proposals were mind-boggling, calling for laser power up to an astounding 7.2 terawatts. The latter was for Forward’s most audacious concept, a round-trip manned mission to Epsilon Eridani.

The second issue is that laser-pushed sails call for extremely large lenses to deliver a tightly collimated beam to the receding starship. The lens for Forward’s Epsilon Eridani mission would be fully a thousand kilometers in diameter, dwarfing our manufacturing capabilities into the forseeable future. Add to these problems the difficulty of manufacturing ultra-thin films in space, not to mention deploying them as sails, and the particle beam emerges as an increasingly attractive alternative.

Landis has now revised his original particle beam ideas to incorporate new technologies. Specifically, he proposes using techniques developed by Robert Winglee at the University of Washington to reduce the physical structure of the sail. The concept is to create a magnetic sail through the use of mini-magnetosphere plasma propulsion (M2P2). From the paper: 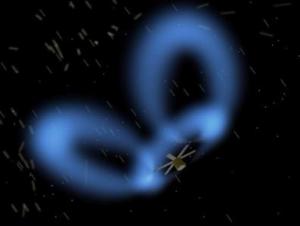 Winglee’s ideas, tuned for missions within the Solar System, assume an
on-board supply of propellant to replenish the plasma, which gradually leaks into space. Landis’ idea is to replace the plasma from the particle beam itself. ‘…Thus the mini-magnetosphere will self-inflate with the particle beam, resulting in no requirement for on-board propellant except, possibly, for initial inflation of the magnetic field.’

Image: An artist’s impression of a mini-magnetosphere deployed around a spacecraft. Plasma or ionized gas is trapped on the magnetic field lines generated onboard, and this plasma inflates the magnetic field much like hot air inflates a balloon. The mini-magnetosphere is then blown by the plasma wind from the Sun or, in Geoffrey Landis’ interstellar concept, by a particle beam sent from the Solar System. Credit: Robert Winglee, University of Washington.

Two more particle beam advantages: The magnetic sail provides braking by creating drag against the solar wind from the destination star, and also becomes a shield against interstellar dust.

Previous post: SETI? Here’s Why We Need to Keep Looking