Asteroid Belt Around a Sun-like Star?

Finding solar systems similar to our own is a continuing quest for planet hunters. Now a star called HD69830, some 41 light years from Earth, has been found to contain a thick band of warm dust that may be an asteroid belt. Although planets have yet to be detected around the star, the find is exciting because HD69830 is similar to the Sun in age and size. And just as Jupiter seems to provide an outer limit to our own asteroid belt, there are suspicions that the asteroid belt around this star may be contained by the gravitational influence of a gas giant planet. If such planets exist around HD69830, they’ll likely be spotted by future planet-hunting missions like SIM, the Space Interferometry Mission, which is scheduled for a 2011 launch. 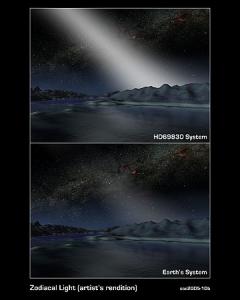 But exoplanetary systems continue to confound our expectations. The newly discovered belt is not only 25 times as dense as our own, it’s also much closer to its star. Imagine a thick belt of primordial debris located inside the orbit of Venus, providing an unforgetable celestial panorama in the night sky of any planet nearby. Its light would be 1,000 times greater than the ‘zodiacal light’ thrown off by our own asteroid belt’s dust.

Image: This artist’s concept illustrates what the night sky might look like from a hypothetical alien planet in a star system with an asteroid belt 25 times as massive as the one in our own solar system (alien system above, ours below). In our solar system, anybody observing the skies on a moonless night far from city lights can see the sunlight that is scattered by dust in our asteroid belt. Called zodiacal light and sometimes the “false dawn,” this light appears as a dim band stretching up from the horizon when the Sun is about to rise or set. The light is faint enough that the disk of our Milky Way galaxy remains the most prominent feature in the sky. (The Milky Way disk is shown perpendicular to the zodiacal light in both pictures.) Credit: NASA/JPL-Caltech/R. Hurt (SSC).

The alien asteroid belt was found with the help of the Spitzer Space Telescope, a space-based infrared observatory. Dr. Charles Beichman of the California Institute of Technology led the team that made the discovery; its findings will be discussed in an upcoming paper in the Astrophysical Journal. Beichman’s group surveyed 85 Sun-like stars but found only a single asteroid belt, a thick band of dust likely augmented by frequent asteroid collisions.

“Because this belt has more asteroids than ours, collisions are larger and more frequent, which is why Spitzer could detect the belt,” said Dr. George Rieke, University of Arizona, Tucson, co-author of the paper. “Our present-day solar system is a quieter place, with impacts of the scale that killed the dinosaurs occurring only every 100 million years or so.”

But is this an asteroid belt or, perhaps, an enormous comet that became trapped in the inner planetary system and is slowly coming apart? Only future studies with Spitzer and other telescopes will provide a definitive answer, but the cometary hypothesis seems to be a long shot. You can read more in this Spitzer press release.