The first of the giant, close-in exoplanets (widely known as ‘hot Jupiters’) was discovered a decade ago around 51 Pegasi. Since then, we’ve found numerous other examples of such objects, challenging our theories of planetary formation and revising estimates of how common habitable worlds may be. Now a team of Canadian astronomers using the MOST (Microvariability & Oscillations of STars) space telescope has found yet another interesting anomaly: a planet that seems to force its star to rotate in synchrony with the planet’s orbit.

The planet is in orbit around the star tau Bootis. MOST has revealed that the star varies in light output in relation to the orbit of the planet around it. The explanation offered by the team studying tau Bootis b is that the planet has forced the outer envelope of the star to rotate so it always keeps the same face toward the planet. The effect is probably limited to the outer layers of gas in the star, in much the same way the Moon can cause a tidal bulge in the water layer on Earth’s surface that results in ocean tides. 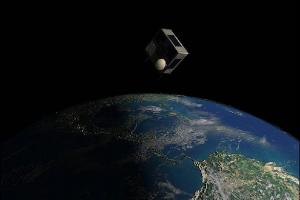 However limited, the effect is still remarkable, and probably made possible by the size of tau Bootis b, about four times the mass of Jupiter, and the fact that it orbits only 1/20th of an AU from the star. Paul Butler and Geoff Marcy first found the planet back in 1997, studying the wobble it induced in its parent. We now know that its orbit around tau Bootis a takes 3.3 days, causing all kinds of other interactions including starspots, tidal distortion and magnetic activity on the star.

Image: A computer rendering of the MOST space telescope in its polar orbit above Earth. Credit: MOST.

The variation between exoplanets is considerable. MOST monitored nine systems in 2004 and 2005, finding each displayed a unique set of properties. From a press release from the University of British Columbia:

“The nature of the light variations is different for each of the nine exoplanet orbits monitored by MOST in 2004 and 2005,” said Gordon Walker, an exoplanet pioneer and MOST Science Team member at UBC. “The explanation for all the variability will have to include intrinsic stellar effects, like rotation, and planet-induced effects, like heating caused by tides and magnetic fields – a complex model, to be sure.”

The announcement of the tau Bootis findings was made at the annual meeting of the Canadian Astronomical Society in Montreal on May 16. A second significant report from the conference describes how the MOST telescope was used to study the exoplanet HD209458b (orbiting the star HD209458a), examining the dip in light that occurs when the planet disappears behind the star. The way a planet reflects light offers information about its atmospheric composition and temperature. In this case:

“We can now say that this puzzling planet is less reflective than the gas giant Jupiter in our own Solar System,” MOST Mission Scientist Dr. Jaymie Matthews announced… “This is telling us about the nature of this exoplanet’s atmosphere, and even whether it has clouds.”

Like tau Bootis b, HD209458b orbits at only 1/20th of the Earth-Sun distance. A scientific paper on these results is expected to be submitted soon. More on this one at a Canadian Astronomical Society press release. You can read more about the MOST mission here.