Here’s the Deep Impact target, as seen by the Hubble Space Telescope in a dramatic set of images that show a jet of dust blowing away from the comet’s nucleus. At the time the photos were taken — seven hours apart on June 14 — Hubble was 120 million kilometers away; the images come from the space observatory’s Advanced Camera for Surveys’ High Resolution Camera. Tempel 1, it is hoped, will provide an even more spectacular show when Deep Impact reaches it on July 4, releasing an 820 lb. copper impactor that will slam into the comet. 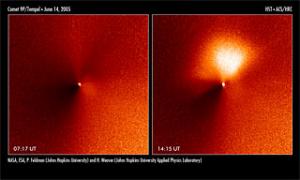 The image on the left shows the comet before the new jet formed. In the center of the image, the bright dot is the reflection of light off the comet’s nucleus, which is too small at these distances for Hubble to resolve. The nucleus is thought to be about 14 kilometers wide and 4 kilometers long, about as hard to see, according to an ESA press release, “…as someone trying to spot a potato in Stockholm from Madrid.”

At the right, a bright area in the shape of a fan shows the new jet. It extends outward roughly 2,200 kilometers. The reason for such outbursts is poorly understood, but may involve increased heat as the comet approaches the Sun, causing cracks in the surface of the nucleus, which would allow trapped gas and dust to spew out. Another possibility is that the pressure of heated gas beneath the surface has lifted a part of the nucleus, causing it to crumble into small dust particles.

It was the American astronomer Fred Whipple (1906-2004) who proposed that comets are ‘dirty snowballs’ of rock and ice left over from the formation of the Solar System. Whipple viewed the cometary nucleus as a mixture of dark organic material, rocky grains and water ice. Bear in mind that the word ‘organic’ when used in this context means that the compound is based on carbon and hydrogen — it does not imply a biological origin. Remarkably, comets are about 50 percent water by weight. It is possible that the carbon and water now found on Earth was originally delivered here by cometary bombardment from the outer Solar System.

Whipple’s classic 1950 paper is “A Comet Model. I. The Acceleration of Comet Encke,” Astrophysical Journal 111: 375, 1950. After proposing that comet Encke was made of a conglomeration of ices — water, carbon dioxide, carbon monoxide, methane, and perhaps ammonia — Whipple would see forty years pass before observations of comet Halley proved that his ‘dirty snowball’ theory was correct.