Designing a mission to interstellar space is a long-term process. Indeed, NASA’s early work on the concept dates back to studies like the Interstellar Precursor Mission developed at the Jet Propulsion Laboratory in 1977, and the later Thousand Astronomical Unit mission, both designed to penetrate as far as 1000 AU into nearby interstellar space. These two missions were envisioned as operating with nuclear-electric propulsion, though solar sails were also under consideration. An early driver for this work was the conference “Missions Beyond the Solar System,” held at JPL in 1976.

We have yet to develop a fixed interstellar precursor probe design, but the concept continues to evolve. NASA’s last interstellar probe review (1999) was based on solar sail technology, but solar thermal, nuclear thermal and nuclear electric propulsion have remained on the table. Now another interesting propulsion alternative has surfaced, using low-thrust but continuous propulsion delivered by a kilowawtt-class electric thruster powered by radioisotope generators. The method bypasses the payload problems created by large, heavy nuclear-electric power sources and trades off continuing advances in the technology of radioisotope thermal generators (RTGs). 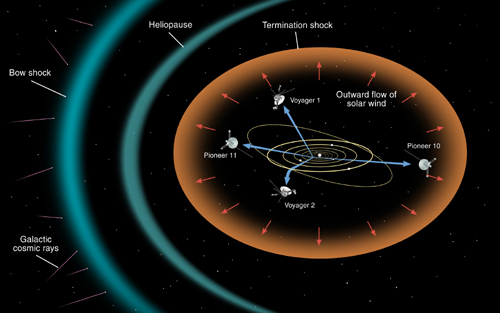 Image: The heliosphere is a bubble in space produced by the solar wind (note the positions of the Voyager and Pioneer spacecraft). Although electrically neutral atoms from interstellar space can penetrate this bubble, virtually all the material in the heliosphere emanates from the Sun itself. The Innovative Interstellar Explorer mission would be the first spacecraft to exit the heliosphere and explore the nearby interstellar medium. Credit: Lunar and Planetary Institute.

What’s wrong with the solar sail? Nothing, particularly when used with a solar gravity assist, but getting a mission off as early as possible means relying on technologies that are closer to flight readiness than the sail. Using existing launch hardware, the so-called Innovative Interstellar Explorer could be launched as early as 2014, with 104 AU achieved in a little less than 18 years. At that distance, the probe would be traveling at 38 kilometers per second (8.0 AU per year) and would need 12 more years to reach 200 AU.

That distance is important: the termination shock marking an abrupt slowdown in the speed of the solar wind is roughly 100 AU out; the heliopause (beyond which the probe will cross into true interstellar space) is thought to be between 150 to 200 AU at its closest point, making 200 AU a minimum distance. An interstellar probe on such a trajectory would be in position to do plenty of good science, especially that relating to the interaction between the heliosphere and the interstellar medium.

Note the key challenges to this mission:

The latter two are critical given the distance from the Sun, where antenna pointing becomes paramount. Interestingly, the IIE team chooses not to build an optical downlink into the spacecraft because of the tight pointing requirements from 100 to 200 AU. Instead, the paper focuses on a 3-meter high-gain antenna using Ka-band radio communications and a downlink to the 11-meter ‘dish farm’ contemplated as an upgrade to NASA’s Deep Space Network. It’s also interesting to contemplate how tracking such a probe could help us study the anomalous forces that may be acting on Pioneer 10 and 11.

For a full overview of the science mission, you can find the paper here. The authors are Mike Gruntman, Ralph L. McNutt, Jr., Robert E. Gold et al.; the title is “Innovative Explorer Mission to Interstellar Space.” The paper was delivered at the at the Fourth IAA Symposium on Realistic Near-Term Advanced Scientific Space Missions in Aosta, Italy, which concluded on July 6. Be aware as well of “Voyage to the Stars: NASA Study Mulls Options,” a Space.com story on the mission.