With excitement building over what everyone hopes will be a January launch of the New Horizons mission to Pluto and Charon, astronomers have found yet another tool for studying the distant worlds. They’re taking advantage of a rare alignment in which Charon, Pluto’s moon, passes in front of a star. Such an event has been observed only once, some 25 years ago, and with less capable instrumentation.

We’ll know a lot more about the results of the July 10-11 occultation in September, when they’re presented at the 2005 meeting of the American Astronomical Society’s Division of Planetary Sciences meeting, to be held in Cambridge, England. There, scientists from MIT and Williams College will report on observations taken with four telescopes located at various sites in Chile. Remarkably, the team was able to muster more than 100 square meters of telescope surface facing Charon, a number that represents a ‘…noticeable fraction of the world’s total telescope area,’ according to an MIT news release.

Although the actual occultation lasted less than a minute, a close study of the data it produced may be able to tell us whether or not Charon has an atmosphere and determine a more accurate value for its radius. All this through an alignment that in terms of rarity can hardly be matched. “It’s amazing that people in our group could get in the right place at the right time to line up a tiny body 4 billion miles away,” said Jay M. Pasachoff, Williams College team leader and a professor in the Department of Astronomy. “It’s quite a reward for so many people who worked so hard to arrange and integrate the equipment and to get the observations.” 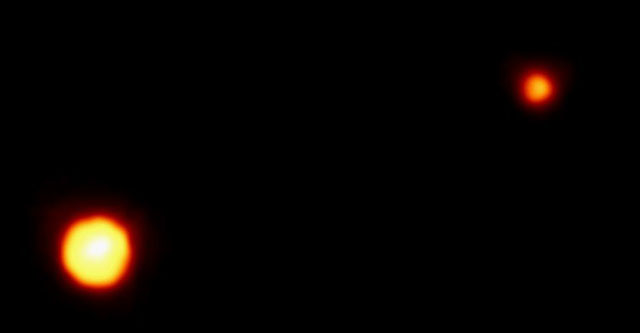 Image: Pluto and Charon as viewed by the Hubble Space Telescope. Note the darker tint of Charon, indicating differences in surface composition. Also, note what may be a surface feature at the center of the Pluto image. Credit: Space Telescope Science Institute.

The precision involved in the monitoring of this event is hugely impressive. One thing the research team had to do was determine the best places from which to observe the occultation. They chose their telescopes along a north-south line in Chile because predictions of the ‘starlight shadow’ of Charon were uncertain by several hundred kilometers. From the news release:

Since the star that was hidden is so far away, it casts a shadow of Charon that is the same size as Charon itself, about 1,200 kilometers in diameter. To see the event, the distant star, Charon, and the telescopes in Chile had to be perfectly aligned. All these telescopes were in clear weather and successfully observed the occultation.

There is a video of the occultation of the star C313.2 available via MIT, and it’s well worth a look. Meanwhile, I’m remembering a 2002 interview I did with the Jet Propulsion Laboratory’s James Lesh, who is chief technologist for JPL’s Advanced Multiple Mission Operations System, which includes the Deep Space Network. We had been speaking about how communications signals can be used for additional purposes, often with scientific benefits not originally forseen.

Lesh noted the value of looking at a radio signal from a spacecraft and observing how it behaves as the spacecraft goes behind a planet; such observations can unlock features of planetary atmospheres that would otherwise be hidden. Laser communications should also provide such benefits. “I claim there is a very similar field I would call light science,” Lesh said. “One could perhaps get accurate measurements of high altitude atmospherics. One could also observe transmission forward scattering through planetary ring systems, achieving very fine spatial selection. One person’s noise is often another persons signal.”

In much the same way, the light from a distant star becomes a scientific tool for ‘light science’ in studying the possible atmosphere and other features of a world that is 40 times as far from the Sun as our Earth. The ingenuity of such observations gives us a glimpse of the excitement ahead as we begin to decipher data from missions like New Horizons, and new Earth-based telescopes like the Giant Magellan Telescope, the first of whose mirrors is being cast this month at the University of Arizona.