Regular readers of Centauri Dreams will know James Benford as the scientist who showed that microwaves could move a sail in a vacuum. That experiment, performed at the Jet Propulsion Laboratory, involved a 10-kilowatt microwave beam and a 10 sq cm sail in a vacuum chamber. The material used was a carbon fiber material commonly called carbon-carbon, in which carbon molecules are fused together in a structure called a ‘microtruss.’ Developed by San Diego’s Energy Science Research Laboratories, carbon-carbon is terrifically interesting as a possible material for early solar and beamed sail work.

The president of Microwave Sciences in Lafayette CA, Benford wrote in a recent e-mail about the failed Cosmos 1 solar sail launch. He had hoped to oversee a microwave experiment using the Deep Space Network’s Goldstone facilities to test the effects of a microwave beam on a sail in operational conditions, but that was not to be. At least, not this time. Benford’s message is worth quoting, and is presented here with his permission:

“I was confident that, if Cosmos-1 were launched and deployed, we could acquire, track and put the beam on the sail. We could verify that it was on the sail and, maybe, get a measurement of the acceleration. We might even be able to modulate the beam to excite the oscillation modes of the sail to get a better detection. 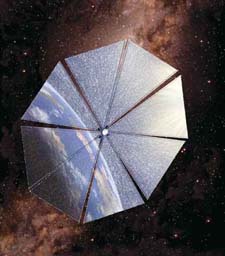 “The loss of Cosmos 1 forecloses on the Microwave Acceleration eXperiment (MAX). For a day or two it was to me quite depressing. To close the book, so to speak, I put all the papers together in a binder and files. But before I filed Cosmos-1/MAX away….
I had a realization that this isn’t the end; it’s just the beginning. Cosmos-1 was the first sail mission, but not the last. There are already stirrings to use the Cosmos-1 design to try again. There will be future sail missions, we just don’t know when. To prepare for the next attempt to accelerate a sail with a beam, we’re beginning now to document ways of doing it better.

Image: What might have been (and what may still be): A Cosmos-class sail in orbit. “A clear measurement of beam-driven thrust in orbit on a real Sailcraft will be a significant scientific contribution, the first step in the experimental study of beam-driven sailing,” Benford writes in his recent Aosta paper. Credit: Rick Sternback/The Planetary Society (c).

How to do it better? Here are three Benford suggestions:

Make sure that the onboard transmitter is a very stable oscillator. “With that we could establish a phase-locked loop with Cosmos-1, enabling a sensitive measure of velocity changes. X-band would be better than the Cosmos-1 S-band, because there would be more cycles to detect.” (Centauri Dreams’ note: S-band, now rapidly becoming obsolete, has been largely supplanted by X-band frequencies between 8.40 and 8.45 GHz for deep space work, and 8.45 to 8.50 GHz for near-Earth operations).

A Cosmos-2 mission may be able to use a ‘retro-reflector’ to enable an optical communications link with JPL’s Optical Communications Telescope Laboratory (OCTL). “With the micron laser,” says Benford, “there would be many 100,000 times more cycles to detect.”

Conduct EMI (electromagnetic interference) tests on the spacecraft electronics early in the fabrication process to forestall problems. “I expected, based on much prior work, that there would be no beam-caused interference on Cosmos-1,” Benford adds. “If we show that in tests, they’ll let us start beaming much earlier in the mission, and not have to wait till the very end.”

Previous post: Sharpening Our View of the 10th Planet