Brown Dwarfs in the Billions

Brown dwarfs are often called ‘failed stars,’ objects without enough mass to sustain the hydrogen-to-helium fusion reaction that powers the Sun. They’re dim enough that it was only in 1995 that the first brown dwarf, Gliese 229B, was discovered and the spectral classes L and T created to accomodate the category. The nearest known brown dwarfs are found around the star Epsilon Indi, a main sequence K-5 dwarf star; intriguingly, the first brown dwarf discovered in the system was subsequently found to have another brown dwarf orbiting it. 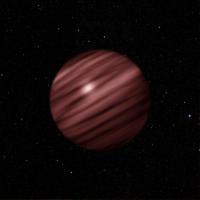 Now a team from Arizona State University led by Russell Ryan has used date from the Hubble Space Telescope to look for brown dwarfs above and below the galactic plane, with an eye toward determining their total population in the Milky Way. The team’s near infrared data tracked down 28 stars apparently fitting the L and T spectral types in a disk roughly 2200 light years thick. Their projections based on this survey conclude that 100 billion brown dwarfs populate the Galaxy, a number as large as that normally associated with normal stars.

For more, see Russell Ryan, Nimish Hathi, Seth Cohen et al., “Constraining the Distribution of L- & T- Dwarfs in the Galaxy,” now available at the arXiv site, and planned for a future issue of Astrophysical Journal Letters. Astronomer and author Ken Croswell offers a summary of the team’s work here. From Croswell: “Despite their impressive number, brown dwarfs add little weight to the Galaxy and do not account for its dark matter. Ryan’s team estimates brown dwarfs contribute roughly a billion solar masses to the Milky Way–only 0.1 percent of the Galaxy’s total. Altogether, the Galaxy has roughly a trillion solar masses, most of which is dark matter.”

Centauri Dreams‘ take: If brown dwarfs are as common as normal stars, we can expect to find others closer to us than Epsilon Indi. Indeed, our catalog even of M-class red dwarfs within 100 light years of the Sun is by no means complete, and it would surprise few astronomers to find a brown dwarf nearer than the Alpha Centauri system, currently considered the closest stars to Earth. The trick is tracking down these dim objects in the first place, but we can expect numerous new brown dwarf discoveries as the next generation of large Earth-based telescopes begins to come online.

Next post: An Infrared Hunt for Artificial Kuiper Belt Objects