Can there be livable habitats on Titan? A paper just presented at the Division for Planetary Sciences meeting in Cambridge makes the case that several key ingredients of life may be present on the huge moon. Titan possesses liquid reservoirs, organic molecules and the needed energy sources. The question: is the environment simply too cold? With temperatures down to -178 degrees Celsius (-289 degrees Fahrenheit), the chemical reactions to produce life would move ponderously, but perhaps not too slowly to function.

The first images from beneath Titan’s cloud cover made the speculation all the more intense. Methane shows up in clouds as well as in liquid form at the surface at these temperatures, and may provide the analog for Earth’s water in a life-sustaining hydrological cycle. Moreover, there are hints of ice volcanoes that imply the existence of large amounts of water (mixing with ammonia) not far below the surface.

So where does it all lead? From a Southwest Research Institute (San Antonio, TX) news release:

“One promising location for habitability may be hot springs in contact with hydrocarbon reservoirs,” says lead author David H. Grinspoon, a staff scientist in the SwRI Space Science and Engineering Division. “There is no shortage of energy sources [food] because energy-rich hydrocarbons are constantly being manufactured in the upper atmosphere, by the action of sunlight on methane, and falling to the surface.”

The team focuses on acetylene, which could be used by organisms in reaction with hydrogen to release the energy that could power a metabolism. That this is speculative is obvious, but if you’re looking for bizarre forms of life, consider Grinspoon’s other comment:

“The energy released could even be used by organisms to heat their surroundings, helping them to create their own liquid cryoenvironments,” says Grinspoon. “In environments that are energy-rich but liquid-poor, like the near-surface of Titan, natural selection may favor organisms that use their metabolic heat to melt their own watering holes.”

Centauri Dreams‘ take: It has always been natural to look for life in more or less terrestrial terms, but the recent study of extreme environments is showing us even on Earth how wide the parameters for life may be. It’s fascinating to realize that we now must include the satellites of outer planets, like Jupiter’s Europa, Ganymede and Callisto, along with Titan and even poor, battered Enceladus in the list of possibilities. Hard to imagine, but who knows what we may someday find on places as exotic as Triton. 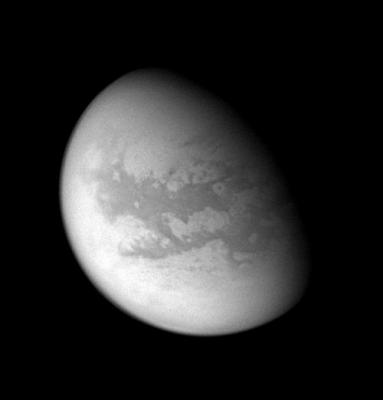 Image: This processed image from Cassini’s Aug. 22, 2005, flyby of Titan reveals mid-latitudes on the moon’s Saturn-facing side. Is it conceivable that a living ecosystem may exist at the moon’s frigid temperatures? Credit: NASA/JPL/Space Science Institute.

And if we do start finding such life forms, it’s going to give a huge impetus to the belief that life is all but ubiquitous in the universe. Whether or not any significant percentage of it is intelligent is another question (Centauri Dreams leaves for philosophers the attempt to define ‘intelligence’). But a galaxy crowded with living worlds is a vision that awaits only the first confirmed sightings of terrestrial planets to go front and center. We should have such sightings within a decade, if not less. Keep your eye on the Kepler mission.

The paper “Possible Niches for Extant Life on Titan in Light of Cassini-Huygens Results” was presented today at the Division for Planetary Sciences meeting in Cambridge.