A Vision of the Sun’s Future?

The white dwarf star GD 362 has been cooling for up to five billion years. You might think of it as an image of our Sun’s future, although it was originally about seven times more massive. As the Sun’s will do five billion years from now, this star’s core simply ran out of fuel, reaching a point where it could no longer create the heat needed to counterbalance gravity. As the star died, it would have given off stellar material, initially swelling dramatically, then dying back to the dwarf we see today. 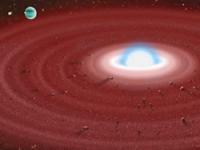 But what has astronomers studying Gemini Observatory data talking is that GD 362 seems to be surrounded by an extensive band of dust and debris. The find is striking — gravity and radiation should long ago have removed such materials from the star’s proximity. The only reasonable explanation is that an asteroid, or perhaps something as large as a planet, has survived the demise of the star and is now contributing material for the debris disk. “The parallel to our own solar system’s eventual demise,” says Eric Becklin, UCLA astronomer and Principal Investigator for the Gemini observations, “is chilling.”

Image: Artist’s visualization of what a dust disk might look like around the white dwarf GD 362. A more distant planet (shown at upper left) might be responsible for “shepherding” the dust ring and promoting ongoing collisions. This striking image (click to enlarge) is the work of noted space artist Jon Lomberg (www.jonlomberg.com).

From a Gemini Observatory news release:

“There are just precious few scenarios that can explain so much dust around an ancient star like this,” said UCLA’s Mike Jura, who led the effort to model the dust environment around the star. “We estimate that GD 362 has been cooling now for as long as five billion years since the star’s death-throes began and in that time any dust should have been entirely eliminated.” Jura likens the disk to the familiar rings of Saturn and thinks that the dust around GD 362 could be the consequence of the relatively recent gravitational destruction of a large “parent body” that got too close to the dead star.

And GD 362 raises other mysteries. Perhaps most surprising is the abundance of metals — calcium, magnesium and iron at levels similar to our own Sun — where no heavier elements would have been expected. UCLA’s Benjamin Zuckerman, a co-author on the Gemini-based paper that will appear in an upcoming issue of the Astrophysical Journal, calls the finding “a complete surprise.” You can hear audio clips of Zuckerman discussing the star by following links on this page.

An independent team working with the NASA Infrared Telescope Facility (IRTF) has produced data that support the idea of a dust disk around GD 362. And note this comment by University of Texas grad student Mukremin Kilic, who led the team making the IRTF observations. Here he makes reference to the only other white dwarf known to have a dust disk:

“Both of these stars’ atmospheres are continuously polluted by metals — that is, heavy chemical elements — almost surely accreted from the disk,” Kilic said. “If the accretion from a debris disk can explain the amounts of heavy elements we find in white dwarfs, it would mean that metal-rich white dwarfs — and this is fully 25% of all white dwarfs — may have debris disks, and therefore planetary systems, around them. Planetary systems may be more numerous than we thought.” More on the IRTF work can be found here.