M-class red dwarfs have never figured prominently in the SETI search. The reason for this is apparent: such stars, of which Proxima Centauri, Earth’s nearest stellar neighbor, is one, are flare stars. The intense radiation from solar flares should cleanse a planetary surface of life, especially given the close proximity of such a planet to its star. Remember, the habitable zone around a red dwarf is going to occur well inside the orbit of Mercury. 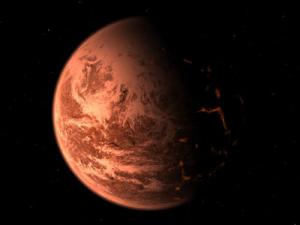 And there’s a second reason. By virtue of having to orbit the host star so tightly, a planet around a red dwarf is going to be tidally locked. One side would be baked, the other frozen, which makes the odds on liquid water look slim. But assumptions are made to be questioned, which is why work at Ames Research Center in the late 1990s remains so interesting. One implication of the Ames work, for example, is that there are conceivable weather patterns that could circulate heat to the dark side of a tidally locked world, keeping it warm enough to prevent its atmosphere from freezing out.

SETI pioneer Jill Tarter is well aware of such work, saying in a recent article in Astrobiology Magazine:

“If you put a little bit of greenhouse gas into an atmosphere, the circulations can keep that atmosphere at a reasonable temperature and you can dissipate the heat from the star-facing side and bring it around to the farside. And, perhaps, end up with a habitable world.”

That’s a big ‘perhaps,’ but it ties in with other recent work that shows that most of a red dwarf’s flare activity occurs early in its life cycle (this is why the recent observation of a major flare from Barnard’s Star is so unusual, given the star’s age). A quieting flare environment might allow life to survive. And because seven out of ten stars in our galaxy are red dwarfs like Proxima, we don’t want to ignore possible interesting targets as we focus on what seem the more likely F, G and K class stars.

As the Allen Telescope Array comes online, its 350 antennae will handle traditional radio astronomy as well as SETI, and with careful adjustment, astronomers will be able to form as many as eight virtual antennae, each pointing to a different star. An efficient SETI search will be one that allows the largest number of target stars in the array’s field of ‘view,’ and that means adding M-class dwarfs to increase the target list enormously. From the article:

“It’s not the star that I’m interested in,” Tarter says. “It’s the techno-signature from the inhabitants on a planet around the star. I don’t ever have to see the star, as long as I know that it’s in that direction. I don’t ever have to see the planet. But if I can see their radio transmitter – bingo! – I’ve gotten there. I’ve found a habitable world.”

Last July’s red dwarf workshop, chaired by Tarter, found no ‘showstoppers’ that would preclude adding red dwarfs to the target list. Findings from the conference will eventually be published. Until then, Ken Croswell’s story “Red, Willing and Able,” in New Scientist 169 (January, 2001, pp. 28-31) delivers a concise summary of the Ames work. See also Manoj Joshi, Robert Haberle, and R. Reynolds, “Simulations of the Atmospheres of Synchronously Rotating Terrestrial Planets Orbiting M Dwarfs: Conditions for Atmospheric Collapse and the Implications for Habitability,” Icarus 129 (1997), pages 450–65.