Back in the heady early days of Project Orion, Freeman Dyson was already thinking about an advanced interplanetary vehicle that could take a 1300-ton payload to Saturn. His target was Enceladus. “We knew very little about the satellites in those days,” Dyson said. “Enceladus looked particularly good. It was known to have a density of .618, so it clearly had to be made of ice plus hydrocarbons, really light things, which were what you need both for biology and for propellant, so you could imagine growing your vegetables there…”

The quote is from George Dyson’s Project Orion: The True Story of the Atomic Spaceship (New York: Henry Holt, 2002), which belongs on the shelves of anyone interested in the human future in space. And it always comes back to me when I hear more Cassini news from Enceladus, and think how feasible it once seemed (in the 1960’s!) to go straight to the outer planets. Talk about audacity — Orion would set off atomic bombs behind a pusher plate to drive a ship so massive that designer Ted Taylor wanted to include a 4000-lb barber’s chair for the crew, just to make the point that he wasn’t worried about payload. 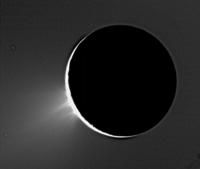 The latest Cassini news may not be quite that audacious, but as this image reveals, it’s an indication that we still have a lot to learn about Enceladus. Backlit by the Sun, the image shows sprays of fine material coming from the south polar region, clear evidence that the moon is geologically active. Current thinking is that these ‘jets’ come out of the warm fractures scientists have dubbed ‘tiger stripes.’ Stretching at least 300 miles above the surface of Enceladus, these plumes are known to contain water vapor and icy particles.

Image: Recent Cassini images of Saturn’s moon Enceladus backlit by the sun show the fountain-like sources of the fine spray of material that towers over the south polar region. Credit: NASA/JPL/Space Science Institute.

And what a surprise would have met our 60’s era Project Orion explorers if they had ever launched the Saturn mission. From a Jet Propulsion Laboratory news release:

“I think what we’re seeing are ice particles in jets of water vapor that emanate from pressurized vents. To form the particles and carry them aloft, the vapor must have a certain density, and that implies surprisingly warm temperatures for a cold body like Enceladus.”

That thought is from Caltech’s Andrew Ingersoll, but it was left to imaging team member Torrence Johnson at JPL to go the final step, noting the resemblance of Enceladus to a ‘huge comet,’ a body whose energy, however, comes not from sunlight but internal heating by radioactivity and tides. Enceladus’ role in supplying material to Saturn’s E ring becomes more significant with each new Cassini pass. It’s a shame we had to wait so many years after the demise of Project Orion to see these things close up, but we can hope that research in areas like antimatter-initiated microfusion or Steve Howe’s antimatter sail may eventually get us there without the baggage of nuclear weaponry.