Astronomy can be a time machine, taking us back to the era when the light we are observing left its source. Looking at a galaxy ten billion light years away thus tells us what galaxies looked like in that epoch. But the dizzying number of stars in our galaxy alone also lets us see into our own past, by showing us stellar systems much like ours once was. Such a system is that around HD 12039, a Sun-like star about 137 light years away.

By Sun-like, I mean a yellow G-type star, and that equates to surface temperatures between 5,000 and 7,000 degrees Fahrenheit. But HD 12039 is also much younger than the Sun, perhaps 30 million years old. In other words, it’s about the age that the Sun was when the Earth and Moon probably formed. Like our Sun in that era, the star has not yet settled into the main sequence, which marks mature nuclear-burning. It’s a bit brighter, a bit cooler, and a bit more massive than Sol. 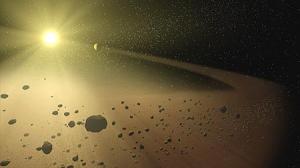 The interesting news comes when we consider HD 12039’s debris disk. A team led by Dean C. Hines (Space Science Institute), using the Spitzer Space Telescope, has sampled a number of Sun-like stars, finding that between 10 and 20 percent of them have outer debris disks, much like the Kuiper Belt in our own Solar System. But HD 12039’s debris disk is narrow and warmer than the others, and at between 4 and 6 AU from the star, it’s about where Jupiter is in relation to the Sun. The narrowness of the disk may be caused by the gravitational attraction of an unseen planet.

Image: This artist’s concept depicts a distant hypothetical solar system, similar to the one recently discovered with the Spitzer Space Telescope. In this artist’s rendering, a narrow asteroid belt filled with rocks and dusty debris, orbits a star similar to our own Sun when it was approximately 30 million years old (about the time Earth formed). Within the belt a hypothetical planet also circles the star. Credit: NASA/JPL-Caltech/T. Pyle (SSC).

The implication? “At 30 million years, the material we see in this star likely has to come from ground-up rocks in a zone where terrestrial planets could form,” Hines said. The disk, in other words, may be in the process of planet formation, with rocky debris in a state of frequent collision. Hines adds, “This is one of a very rare class of objects that may give us a glimpse into what our solar system may have looked like during the formation of our terrestrial planets.”

Centauri Dreams‘ take: Is HD 12039 going through a typical scenario of planetary evolution, or are these ‘warmer’ debris disks uncommon? (I put ‘warmer’ in quotes because the actual temperature of this disk is minus 262 degrees Fahrenheit, warm only in comparison to outer debris disks like the Kuiper Belt). Early evidence seems to show that inner debris disks like this one show up around 1 to 3 percent of young Sun-like stars. We may be looking at a constraint on terrestrial planet formation, one that implies perhaps 3 out of 100 Sun-like stars are likely to form habitable planets. But these observations allow only the most preliminary of speculations.