The case for life around other stars, always a strong one, has become even more persuasive of late. First we found planet formation around HD 12039, a Sun-like star about 137 light years away, revealing a system that may look like our Solar System in its infancy. Now comes news based on findings from the Spitzer Space Telescope that astronomers have observed acetylene and hydrogen cyanide in the inner regions of the debris disk around the star IRS 46. Both gases are organic compounds considered to be precursors to DNA and RNA.

IRS 46 is located in the constellation Ophiuchus about 375 light years from Earth. Like HD 12039, it is a young star, surrounded by a disk of gas and dust that should, if our theories hold, house the raw materials of planets. Astronomers at the W.M. Keck Observatory (Mauna Kea), Leiden Observatory and the Netherlands Institute for Space Research used Spitzer’s infrared spectrometer to study 100 stars, but IRS 46 was the only one to reveal signs of an organic mix. One reason may be that its disk is oriented in such a way as to allow Spitzer to extract the best observational data, according to Fred Lahuis of Leiden Observatory.

These are intriguing findings, to say the least. Acetylene and hydrogen cyanide can work together in the presence of water to become some of the necessary ingredients for DNA and protein. Here’s what Geoffrey Blake of Caltech, a co-author of the soon to be published paper on these findings, has to say about such reactions:

“If you add hydrogen cyanide, acetylene and water together in a test tube and give them an appropriate surface on which to be concentrated and react, you’ll get a slew of organic compounds including amino acids and a DNA purine base called adenine. And now, we can detect these same molecules in the planet zone of a star hundreds of light-years away.” 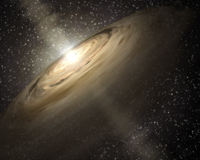 Further data from the James Clerk Maxwell Telescope on Mauna Kea also points to a stellar wind pushing out against the gaseous disk, one that may have a hand in eventually clearing the debris and revealing the presence of rocky, terrestrial planets several million years from now.

We’ve found organic gases like these around other celestial objects. They’re easy to spot in the atmospheres of our own gas giants and appear both on Titan and on cometary surfaces in the Solar System. The European Space Agency’s Infrared Space Observatory has also found them around certain massive stars, but IRS 46 is the first Sun-like star around which they have been confirmed. The Keck observations suggest the organic materials may be no more than 10 AU from the star, about the distance between Saturn and the Sun, but more work needs to be done to refine this distance.

The paper on this work will appear in the January 10 issue of the Astrophysical Journal Letters.