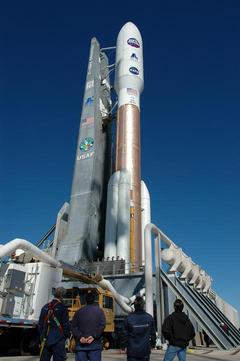 Centauri Dreams is not conceived as a streaming news site, but the NASA servers are slammed, so I’ll update as needed until we get New Horizons off the ground. Update times are GMT (subtract 5 for EST).

1950: Upper level winds remain a concern although launch is still set for 2005 GMT (1505 EST). No technical issues with the Atlas V; the problem is solely meteorological at this point.

1946: Launch time now set for 2005 GMT (1505 EST), due to a problem with the Deep Space Network that has now been resolved. An earlier delay had been caused by upper level winds.

All eyes are on Launch Complex 41 this morning, and on the clock. The New Horizons launch is scheduled for 1824 GMT (1324 EST), and the countdown clock is ticking on the mission’s launch page. NASA TV will be the best way to view the event, but the launch page is offering a variety of coverage options including webcams and video feeds. Click here for a breakdown of the launch sequence and key events within it.

Image: On Complex 41 at Cape Canaveral Air Force Station in Florida, workers take a moment to observe the Atlas V expendable launch vehicle with the New Horizons spacecraft poised for launch. The liftoff is scheduled for 1:24 p.m. EST Jan. 17. After its launch aboard the Atlas V, the compact, 1,050-pound piano-sized probe will get a boost from a kick-stage solid propellant motor for its journey to Pluto. New Horizons will be the fastest spacecraft ever launched, reaching lunar orbit distance in just nine hours and passing Jupiter 13 months later. Credit: NASA.