The most Earth-like planet yet found has been discovered by a team of astronomers in a collaborative effort that involved 73 scientists in 12 countries. When astronomers use the term ‘Earth-like’ in this context, they’re referring to planets whose mass is closer to Earth’s than previous discoveries. They’re also talking about surface conditions, for OGLE-2005-BLG-390Lb seems to have a rocky surface, and is only five times as massive as Earth.

And what a fascinating find from the standpoint of technique. This is no relatively nearby gas giant found through observing the radial velocity changes it caused in its star’s path through space. Instead, the new world, some 20,000 light years away, was found through microlensing, where the gravity of an intervening star magnifies the light of a more distant star. Close study of the brightening phenomenon can reveal defects that are the telltale sign of a companion object.

In this case, as the star and its planet passed in front of the background star, the light curve showed the clear signature of a planetary body, as seen in the image below. OGLE-2005-BLG-390Lb is not the first planet found through microlensing, but the previous two have been gas giants larger than Jupiter. 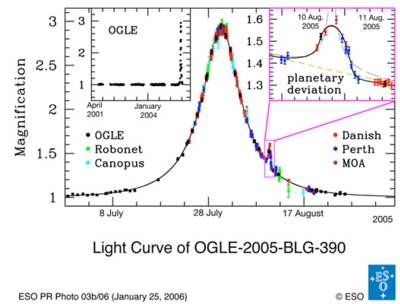 Image (click to enlarge): Data obtained by PLANET/RoboNet, OGLE, and MOA on the microlensing event OGLE-2005-BLG-390 together with a model light curve, showing the planetary deviation on its falling part, lasting about a day. Also shown are best-fitting models with a single lens and a binary source (long-dashed) and a single-source-single-lens light curve (short-dashed). Each point represents the brightness in a single image and the data are colour-coded in order to indicate the telescope. The regular cycle of colors shows how observing is taken over by the next telescope in turn as the night ends at each site. An enlargement of the planetary deviation is shown as an inset in the top right. Credit: European Southern Observatory.

But back to the new planet: it orbits a red dwarf star five times less massive than the Sun in roughly ten years. Astronomers working on the project calculate its surface temperatures at 220 degrees Centigrade below zero, and suspect that the world has a thin atmosphere and a rocky surface buried deeply beneath frozen oceans. On that score, the Solar System analogue to OGLE-2005-BLG-390Lb may not be Earth so much as Pluto.

A heartening conclusion now being drawn from this work is that smaller, frozen worlds like this are more common than Jupiter-class gas giants, which have tended to be, overwhelmingly, the kind of worlds found by radial velocity searches. “Indeed if Jupiter-like planets were as widespread, the microlensing method should have found dozens of them by now,” said David Bennett (University of Notre Dame, USA), a PLANET team member. PLANET, one of the groups behind the find, is a network of one-meter class telescopes stretching from Chile to Australia and South Africa.

The paper, soon to appear in the January 26 Nature, is J.-P. Beaulieu, D. P. Bennett, P. Fouqué et al., “Discovery of a cool planet of 5.5 Earth masses through gravitational microlensing” (abstract here). A Nature.com article is available, while audio and video podcasts on the discovery are online.