Catching up on interesting stories, Centauri Dreams notes the bizarre case of the counter-rotating disk material around a young star 500 light years from Earth in the direction of Ophiuchus. Of course, we don’t actually know if planets exist there — we may just be looking at planetary formation — but astronomers using the Very Large Array radio telescope have determined that the inner part of the disk orbits in the opposite direction from the outer, and that’s a novel finding.

It seems reasonable to expect planets to orbit in the same direction; at least, it does if we take our own Solar System as a model, but exoplanetary findings have made it clear that planetary systems may be far more diverse than we originally thought. In this case, the assumption must be that the formative solar system drew material from not one but two prestellar clouds, both of which may provide enough material to form planets in the resultant disk. 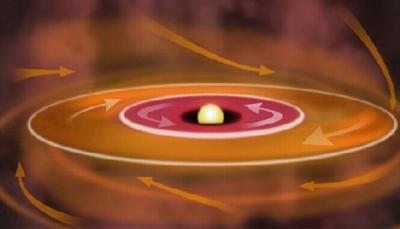 Image: One protostellar cloud collapses further into a disk-like structure that rotates counter-clockwise (white arrows) about the newly-formed protostar. In addition, the protostar siphons off material from a second, passing protostellar cloud rotating in the opposite direction. Because of this, the outer part of the disk rotates clockwise (yellow arrows). Eventually, planets will form from the material in this disk, with the outer planets orbiting the star in the opposite direction from the inner planets. Credit: Bill Saxton, NRAO/AUI/NSF.

And how do we know that parts of the disk are moving in different directions? This work examined radio waves emitted by molecules within the star-forming clouds under investigation — these molecules emit radio waves at specific frequencies whose Doppler Shift can be measured. The key here proved to be observations of silicon monoxide (SiO) molecules. The April 1 edition of the Astrophysical Journal will contain a report on these findings.

Centauri Dreams‘ take: What was news to me in this story was a comment made by Jan Hollis (GSFC) to the effect that counter-rotation has previously been reported in the disks of galaxies (somehow I had missed this). That there should be protostellar disks exhibiting the same behavior is thus not unexpected, although understanding the dynamics that result in counter-rotating galactic material is a much greater challenge, given how much we have to learn about dark matter’s effect in determining just how a galaxy is going to form.