The Geysers of Enceladus

A few years ago, the idea of life on Enceladus would have seemed preposterous, but the Cassini orbiter has sent back images suggesting that the Saturnian moon houses reservoirs of liquid water near the surface. And liquid water is intriguing indeed in any discussion of life.

“We realize that this is a radical conclusion – that we may have evidence for liquid water within a body so small and so cold,” said Dr. Carolyn Porco, Cassini imaging team leader at the Space Science Institute in Boulder, Colo., and the lead author of the report in the journal Science. “However, if we are right, we have significantly broadened the diversity of solar system environments where we might possibly have conditions suitable for living organisms. It doesn’t get any more exciting than this.” 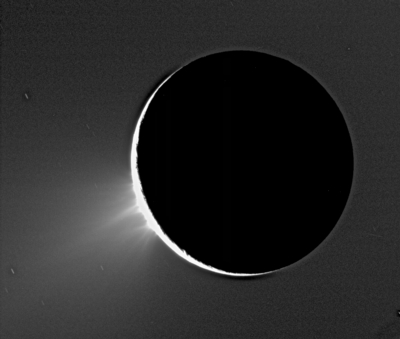 Take a look at the high-resolution Cassini image above (and be sure to click to enlarge it), where a spray of material is clearly visible above the moon’s southern polar region. Then compare to the image below, where the colors have been enhanced to make the contours (and extent) of the plume more apparent. What catches the eye is the sheer extent of the ejected material, which seems to rule out simple frozen mist condensing out of a plume of water vapor. The most plausible solution here is liquid water near the surface erupting like the geysers of Yellowstone. 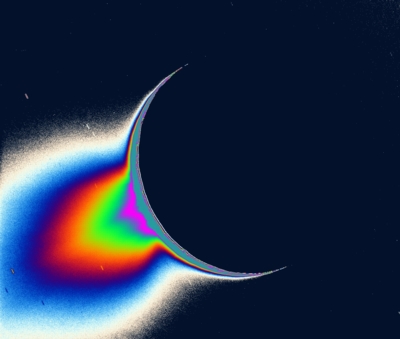 What happens to the vapor and ice that is ejected? The evidence points to much of it falling back to the surface, which would account for the south pole’s bright surface, although some of this material evidently feeds Saturn’s E-ring and spreads oxygen into the Saturnian system as the water molecules break down. What we now have to figure out is why the south pole region is as warm as it is, an issue being studied in terms of a combination of tidal flexing and heating of the interior by radioactive materials that may power the geysers.

Enceladus now emerges as the fourth place in the Solar System — after Earth, Io and (perhaps) Triton — to show active volcanism. The March 10 issue of Science includes a set of papers on Enceladus including the one discussed above, which is Porco, Helfenstein, Thomas, et al., “Cassini Observes the Active South Pole of Enceladus,” pp. 1393-1401, with abstract available here.