The Color of Pluto’s Moons

We have interesting exoplanetary news coming up in tomorrow’s post, but until then let’s talk about Pluto, and the latest Hubble findings about this intriguing system. The two recently found moons are now seen via Hubble imagery to have the same color as Charon, meaning that all three Plutonian satellites are roughly the same shade as Earth’s moon. That’s an interesting finding, because it suggests that all three moons were formed in the same event. It’s also interesting given the reddish hue of Pluto itself, about which we’ll learn more in the years leading to the New Horizons encounter in 2015. 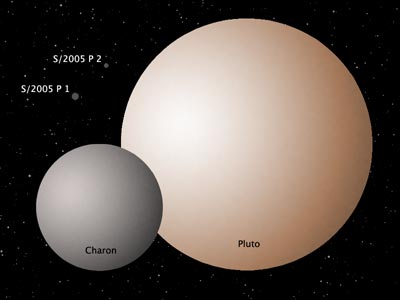 Image: The new HST/ACS observations made on March 2nd reveal that all three of Pluto’s satellites are neutrally colored, unlike reddish Pluto itself. Pluto’s reddish color is believed to be due to reddening agents created by the effects of sunlight acting on its nitrogen and methane surface ices. Charon’s surface is known to consist primarily of water ice; the similar color of P1 and P2 may indicate they too have water ice surfaces. The color similarity of Pluto’s two small satellites to one another and to Charon is consistent with their all having been born as a result of a single giant impact, as previously indicated by their orbits and Charon’s large mass. Credit: NASA, ESA, A. Stern (SwRI) and Z. Levay (STScI).

Pluto thus reinforces our view that the Solar System can be a very dangerous place. For the event we’re speaking of was doubtless a collision between Pluto itself and another object of about the same size. We had already begun to realize that the Moon that hangs in our own sky was the result of a similar collision in the inner system, and the evidence grows that the Kuiper Belt is likely littered with the debris of such impacts. It’s all good reason, even in our more sedate planetary era, to keep our eyes on near-Earth asteroids and to push for continuing research into the kind of technologies that could deflect large objects before they ever present a serious threat to Earth.

Centauri Dreams‘ note: This work, which was conducted by Hal Weaver (Johns Hopkins University Applied Physics Laboratory) and Alan Stern (Southwest Research Institute, and principal investigator for New Horizons), examined the images of Pluto and its moons by running them through blue and red/green filters. Ahead are more observations using filters at longer wavelengths to obtain new information on what the moons are made of — in these redder wavelengths, ice and mineral absorption lines should provide information about the surface.

As for New Horizons, the spacecraft performed a 76-second burn on March 9 to adjust its course for the Pluto ‘keyhole’ around Jupiter, that point that will provide the optimum gravity boost as the vehicle rounds the giant planet. New Horizons is currently moving along at a robust 37.5 kilometers (23.3 miles) per second.