9000 light years away, a planet thirteen times as massive as the Earth orbits a star half the size of the Sun. At -330 degrees Fahrenheit, the newly discovered planet is one of the coldest worlds ever discovered. And its placement within its solar system is interesting indeed, for the icy object occupies an area where, in our system, the asteroid belt holds sway. “We’ve never seen a system like this before,” said Andrew Gould (Ohio State University, and leader of the MicroFUN collaboration, “because we’ve never had the means to find them.”

MicroFUN (MicroLensing Follow-Up Network) is exoplanetary hunting via gravitational microlensing. A star crosses in front of a far more distant one as seen from Earth. The gravity of the intervening object bends light rays from the more distant star and magnifies the image, operating much like a lens. From our observational standpoint, the image of the star brightens as the ‘lensing’ star crosses in front of it, then fades as the lens moves further away. If there are any planets around the foreground star, they can create additional distortions to the light, thus making their presence known to astronomers.

It was the OGLE (Optical Gravitational Lensing Experiment) collaboration that first found the microlensed star last April while looking toward the galaxy’s center. After gathering extensive data, Gould and OGLE leader Andrzej Udalski (Warsaw University Observatory) worked through computer models that confirmed the existence of the planet. They believe it is a ‘super-Earth’, a mixture of rock and ice with a diameter several times that of Earth. Gould’s team argues that one-third of all main sequence stars are likely to have icy super-Earths like this one. 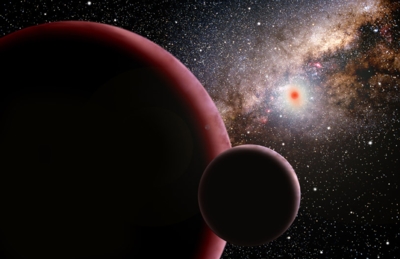 Image: The discovery of a “super-Earth” orbiting a red dwarf star 9,000 light-years away suggests that such worlds are three times more common than Jupiter-sized planets. The 13-Earth-mass planet (shown in this artist’s conception with a hypothetical moon) was detected by a search for microlensing events, in which the gravity of a foreground star distorts the light of a more distant background star. Microlensing is the only way to detect Earth-mass planets from the ground with current technology. Credit: David A. Aguilar (CfA).

This could mean super-Earths are more common than the Jupiter-class worlds we have grown used to finding through our exoplanet hunts. “Our discovery suggests that different types of solar systems form around different types of stars,” explains Scott Gaudi (Harvard-Smithsonian Center for Astrophysics). “Sun-like stars form Jupiters, while red dwarf stars only form super-Earths. Larger A-type stars may even form brown dwarfs in their disks.”

“Microlensing is the only way to detect Earth-mass planets from the ground with current technology. If there had been an Earth-mass planet in the same region as this super-Earth, and if the alignment had been just right, we could have detected it. By adding one more two-meter telescope to our arsenal, we may be able to find up to a dozen Earth-mass planets every year.”