On Interstellar Dust and Fast Probes

Here’s why we’ll have to know a great deal about the interstellar medium — the stuff between the stars — before we ever send out probes at a substantial fraction of lightspeed. The gas and dust forming into dark, concentrated knots in the image below creates so-called ‘Bok globules,’ named after astronomer Bart Bok, who hypothesized their existence back in the 1940s. They’re hundreds of light years in size and, when perturbed, can form concentrated pockets of gas and dust that have the potential of turning into stars. 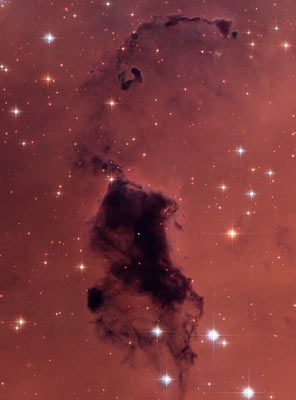 But not all of them do become stars. In the image, we’re looking at NGC 281, a nearby nebula and star-forming region some 9,500 light years away from Earth in the direction of Cassiopeia. In this region, many of the dust knots seem to be dissipating before stellar formation actually occurs. You can also see the bright blue stars of a cluster called IC 1590, whose young and massive stars put out enough solar wind to energize the surrounding hydrogen gas of the nebula — the result is the pink glow that provides the lovely background color here.

Image (click to enlarge): Dust ‘knots’ like these are a factor as we contemplate future probes moving at a substantial percentage of light speeds. Credit: NASA, ESA, and The Hubble Heritage Team (STScI/AURA).

NGC 281 is a harsh and unforgiving environment, but it makes for beautiful photography. Images like this one, from Hubble’s Advanced Camera for Surveys, remind us that the space between the stars is far from empty. One vital mission of our early probes beyond the Solar System will be to assess the extent and possible effects of interstellar dust in the immediate solar neighborhood. We’ve already learned from Voyager 2’s plasma wave instrument that the impact of space-born dust was readily detected during the Uranus and Neptune flybys. Cassini is providing further data as, of course, is the Stardust mission.

When the British Interplanetary Society’s starship team created the Project Daedalus design back in the 1970s, a key factor was damage control. The planners realized that, at 12 percent of the speed of light, their spacecraft could be destroyed by impact with the tiniest object. Dust itself could vaporize key structural materials. A more pervasive danger would be bremsstrahlung radiation, created when charged particles are suddenly slowed or deflected, forcing designers to shield sensitive electronics.

The Daedalus solution: a beryllium payload shield — 9 millimeters thick and 32 meters in radius — to protect the vehicle. With a mass of 50 tons, such a shield, while effective, would put huge payload constraints on any interstellar probe, forcing us to ponder alternative methods. Another not so small concern: the arrival of any probe in a destination solar system will put it into a more concentrated gas and dust environment still. We have much to learn about coping with ’empty’ space as we learn to make our spacecraft go ever faster.

For more on dust issues, see A. R. Martin “Bombardment by Interstellar Material and Its Effects on the Vehicle,” Project Daedalus Final Report (Journal of the British Interplanetary Society, 1978): S116–S121.