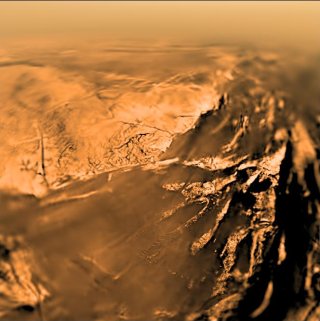 Centauri Dreams has great pleasure in recommending new movie views of the landing of the Huygens probe on Titan, released yesterday by NASA, the European Space Agency and the University of Arizona. The first sequence, titled “View from Huygens on Jan. 14, 2005” offers a spectacular four-minute ride that compresses what would have been seen by the probe during its 2.5 hour descent, using data gathered by the Descent Imager/Spectral Radiometer instrument aboard Huygens.

“At first, the Huygens camera just saw fog over the distant surface,” said Erich Karkoschka, team member at the University of Arizona, Tucson, and creator of the movies. “The fog started to clear only at about 60 kilometers [37 miles] altitude, making it possible to resolve surface features as large as 100 meters [328 feet],” he said. “But only after landing could the probe’s camera resolve little grains of sand millions and millions of times smaller than Titan. A movie is a perfect medium to show such a huge change of scale.”

The view is stunning, especially when I think back to astronomy books I read in the 1950s and 60s, when Saturn itself was a fuzzy Palomar image and Titan no more than a bright enigma. To be looking at movies created from actual lander data on a home PC causes this writer to be amazed all over again by the spread of technology from laboratory to spacecraft and into the home. And ponder what will become possible with optical communications technology in the not so distant future.

The second movie is also a stunner; it shows the operating life of the DISR instrument with graphics and sidebar information, with sounds changing to mimic the probe’s rotational speed and the tilt of its parachute, along with parachute deployments, heat shield release, the jettison of the DISR cover and the actual touchdown. The music score for this one tracks the onrush of data and is utterly haunting.

“There’s so much information in the different displays that come with this movie that one can easily miss something important,” said Karkoschka. “Therefore, I added sound to track the most important features, because the ears hear all the sound no matter where you look.”