A Clear View of Distant Worlds

Yesterday’s post on UMBRAS and occulter technology focuses attention on the characteristics of light, some of them counter-intuitive but well demonstrated. And since we’ve also been talking recently about the nearby star Epsilon Eridani, I’ve chosen an image of that star to illustrate some of the problems with planetary detections. What you see below is via Massimo Marengo (Harvard-Smithsonian Center for Astrophysics), who has done such outstanding recent work on untangling the riddle of Epsilon Eridani’s debris disk. 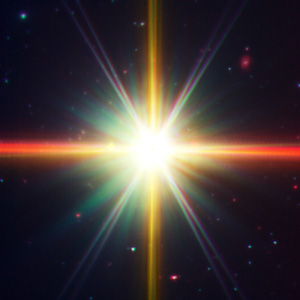 This is a false color image with red, yellow, green and blue representing different infrared wavelengths. I ran the same image last summer, when Marengo posted it on his own weblog (he had used it to illustrate his team’s work in a presentation at the American Astronomical Society meeting in San Diego).

What I want to single out here are the artifacts in the image. The red/orange cross is produced by electronic effects inside the collector, while the green and blue spikes are caused by diffraction in the optical system. In other words, this is one ravishingly beautiful image, but it’s nothing like what the eye would see if you were able to view Epsilon Eridani close up, and not just because it’s working at infrared wavelengths. The idea behind both coronograph and occulter studies is to find ways to reduce or eliminate these distortions. Diffraction, for example, happens because light is actually bent around an intervening object; using a basic telescope with an occulting disk in its focal plane (a coronagraph), you wind up with a series of concentric rings and a bright spot in the center, all of which need to be suppressed.

It’s a tricky challenge, and one being studied in many ways, from using square apertures and varying the shape of the occulting object to creating deformable mirrors that reduce scattered light. But external occulters have significant advantages, including elimination of the scattering problem, theoretically better light suppression, and the ability to use them with any properly placed telescope. Moreover, the target can be placed anywhere in the image plane. A complete list of pros and cons contrasting internal coronagraphs with external occulters can be found at the UMBRAS site.

In any event, the more I think about the recent Terrestrial Planet Finder funding woes, the more I think the situation will result in better science. Terrestrial Planet Finder seemed, not so long ago, to be firming up around an internal coronagraph design that was more costly than competing occulter possibilities and, it seems likely, not capable of the same level of performance, at least when compared to the larger occulter options. We should all be glad that external occulter designs and new missions are now back in the hunt as we try to design the technologies that will give us our first actual images of distant exoplanets.

Previous post: Occulters and Their Uses: A Helpful Resource