A Triple Planetary System and More

Finding three planets around a single star is newsworthy in itself, but when the planets are Neptune-class things get more interesting. And when one of these worlds is found to be in the star’s habitable zone, Centauri Dreams definitely drops everything for a closer look. Not only that, but the system around HD 69830, a Sun-like star some 41 light years away, is also the home of an asteroid belt, making the comparison with our Solar System that much closer.

Here’s what we know, as reported in a paper in the May 18 Nature: The orbital periods of the three planets are 8.67, 31.6 and 197 days, with that outer world located near the inner edge of the zone where liquid water could exist. In terms of mass, this planet is not Earth-like; in fact, the measurements show the new planets to be between 10 and 18 times the mass of Earth. So what we’re probably detecting in the habitable zone is a planet with a rocky/icy core surrounded by a dense atmosphere. We know nothing, of course, about possibly habitable moons.

A rocky composition is suggested for both inner planets as well. In terms of distance, the three worlds are 0.08, 0.19, and 0.63 AU from their star, but the location of the asteroid belt is unknown. The possibilities are between the two outermost planets or farther out than 0.8 AU. Remember that this work was all accomplished by radial velocity investigations, and much remains to be learned as we untangle the results of these measurements.

What grand work this is. The researchers, led by Michel Mayor and Christophe Lovis (Geneva Observatory) used the European Southern Observatory’s HARPS (High Accuracy Radial Velocity Planet Searcher) spectrograph mounted on the 3.6-meter La Silla instrument in Chile. HARPS has demonstrated a remarkable long-term precision of 1 m/s. Take a look at the image below to get an idea of how its data are manipulated. 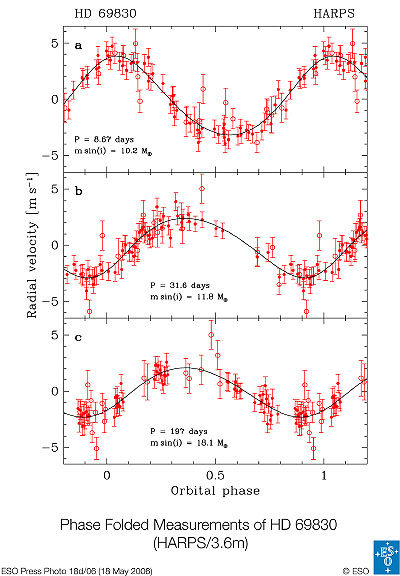 Image: The HARPS radial velocity measurements of HD 69830 are folded with the orbital periods of the three discovered planets: 8.67, 31.6 and 197 days, respectively. In each case, the contribution of the two other planets has been subtracted. The solid line shows the best fit to the measurements, corresponding to minimum masses of 10.2, 11.8 and 18.1 Earth masses. Note that the full span of the vertical axis is only 13 m/s! Error bars indicate the accuracy of the measurements. The integration time was 4 minutes on average for the first 18 measurements (shown as open dots), and was increased to 15 minutes for the remaining points (full dots). The latter measurements are therefore of much higher quality. Credit: European Southern Observatory.

Centauri Dreams‘ take: What astronomers can do with the HARPS instrument is simply mind-boggling, as I am reminded every time I look into its operations. Radial velocity measurements depend on our detecting how the presence of a planet exerts a pull on its star. The velocity variations are tiny, in this case between 2 and 3 meters per second, roughly the speed of a brisk walk. Images like the one above aren’t glamorous — they don’t show us great, ringed planets or green terrestrial Earths — but the story they tell is spectacular. I often write about the breakthroughs we’ll make by imaging exoplanets directly and analyzing their spectra, but let’s not forget the continuing excellence of radial velocity research, or its ever-higher levels of sensitivity.